Lai had been a frequent visitor to Washington, where he has met US Secretary of State Mike Pompeo, to rally support for Hong Kong democracy, prompting Beijing to label him a "traitor".

Lai, 71, has been one of the most prominent democracy activists in the Chinese-ruled city and an ardent critic of Beijing, which imposed the sweeping new law on Hong Kong on June 30, drawing condemnation from Western countries.

His arrest comes amid Beijing’s crackdown against pro-democracy opposition in the city and further stokes concerns about media and other freedoms promised to the former British colony when it returned to China in 1997.

It “bears out the worst fears that Hong Kong‘s National Security Law would be used to suppress critical pro-democracy opinion and restrict press freedom,” said Steven Butler, the Committee to Protect Journalists’ Asia programme coordinator. “Jimmy Lai should be released at once and any charges dropped.”

Ryan Law, Apple Daily‘s chief editor, told Reuters the paper would not be intimidated by the raid.

“Business as usual,” he said.

The new security law punishes anything China considers subversion, secession, terrorism and collusion with foreign forces with up to life in prison. Critics say it crushes freedoms, while supporters say it will bring stability after prolonged pro-democracy protests last year.

Lai had been a frequent visitor to Washington, where he has met senior officials, including Secretary of State Mike Pompeo, to rally support for Hong Kong democracy, prompting Beijing to label him a “traitor”.

Hong Kong police said they had arrested seven men, aged 39-72, on suspicion of breaching the new security law, without naming them, adding that further arrests were possible.

Apple Daily, which posted on its Facebook page a livestream of dozens of police officers entering its premises, reported Lai was taken away from his home early on Monday. The paper said one of Lai‘s sons, Ian, was also arrested at his home.

In the live feed, officers were seen roaming through the newsroom, rifling through files.

Staff were asked to show identity documents. Some executive offices were sealed off with red cordons. The police later wheeled in stacks of empty plastic containers.

Lai himself was brought back to the office in handcuffs later. One Apple Daily reporter asked Lai what he thinks of his arrest, and Lai responded: “They have to arrest me, what can I think?”

Police said they had a court warrant. The law allows police to search premises without one “under exceptional circumstances,” and also allows seizing documents, equipment and financial assets. 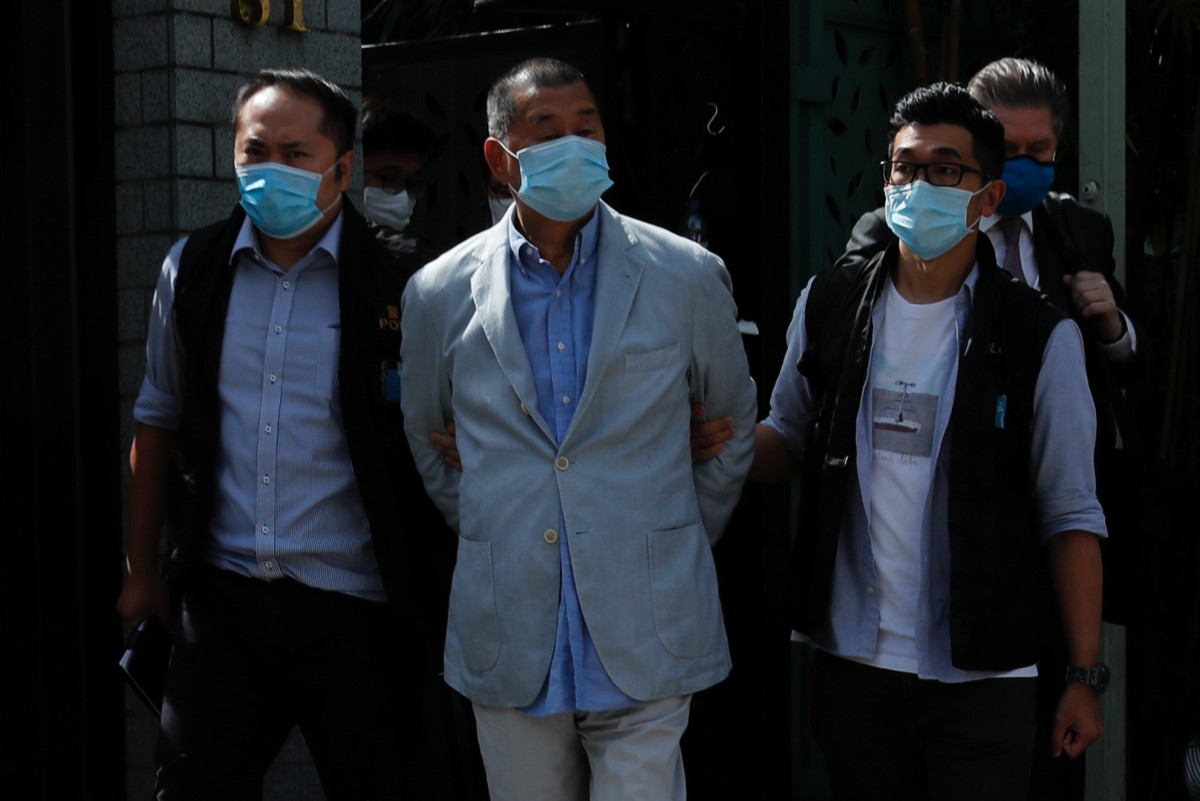 An Apple Daily source said that other senior executives in the company were among those targeted and that police were searching their homes.

“We are arranging lawyers and so on to defend ourselves. We see this as straight harassment,” the source said, adding that Lai was arrested on suspicion of sedition, criminal fraud and colluding with foreign forces.

Shares of media company Next Digital, which publishes Apple Daily, plunged as much as 15.5%.

Also Read: What You Need to Know about Hong Kong’s National Security Law

“I think somewhere in third-world countries there has been such kind of press freedom suppression; I just didn’t expect it in Hong Kong.”

“We still urge the Chinese government to keep its promise and respect Hong Kong‘s democracy and freedom,” Su said.

The law has steered China further on a collision course with the West, prompting countries including Australia, Canada and Britain to suspend extradition treaties with Hong Kong.

On major cases in Hong Kong, the central government in Beijing can claim jurisdiction. The legislation allows agents to take suspects across the border for trials in Communist Party-controlled courts.

Lai was also arrested this year on illegal assembly charges, along with other leading activists, relating to protests last year.

In an interview with Reuters in May, Lai pledged to stay in Hong Kong and continue to fight for democracy even though he expected to be one of the targets of the new legislation.

Before Monday, 15 people had been arrested under the law, including teenagers.

The new legislation has sent a chill through Hong Kong. Activists have disbanded their organisations, while some have fled the city altogether, prompting, in some cases, arrest warrants in their name for suspected violation of the new law.

Also Read: Why Hong Kong’s Security Law Will Not Upend Its Status as a Global Financial Centre

The US on Friday imposed sanctions on Hong Kong leader Carrie Lam and other top officials for what it says is their role in curtailing political freedoms in the territory, drawing mockery and condemnation from Beijing.

The arrest reflects that Hong Kong “wasn’t intimidated” by sanctions, Hu Xijin, editor of Global Times, said in a tweet. Global Times is published by the People’s Daily, the official newspaper of China’s ruling Communist Party.