Hong Kong’s legal system, which remains stronger than China’s for international business activity, will ensure it has a competitive edge over mainland China for the time being.

Following the introduction of a new Chinese national security law, some are questioning the sustainability of Hong Kong’s position as an international financial centre. These doubts are augmented by China’s plans to transform Hainan, another island off the southern coast of the Chinese mainland, into a free-trade hub. This further calls into question the idea that Hong Kong is irreplaceable for some.

But Hong Kong’s success as a centre of international finance, connecting the world to mainland China, is built on several foundations. These include having a stable business environment, the free flow of capital, low tax rates and a reliable legal system based on English common law.

While we cannot underestimate some individuals’ fears that they may be arbitrarily detained under the new national security law, there is also evidence that the law will curb the social unrest that has been detrimental to business in Hong Kong. Crucially, our research supports the idea that Hong Kong’s legal system remains stronger than China’s for international business activity. This will ensure it has a competitive edge over China for the time being.

Under Article 8 of the Basic Law of Hong Kong, which serves as the city’s de facto constitution, Hong Kong has a common law system that it inherited from the UK. In this kind of legal system, judges have the ability to make laws in the form of case law, which is determined by rulings on legal precedents. This makes Hong Kong’s legal system much stronger than China’s civil law system, where vast numbers of laws have been written in recent decades but have not necessarily been tried, tested and applied yet.

Also read: What You Need to Know about Hong Kong’s National Security Law

The ability of judges to make new laws in a common law system means that any issues arising from rapidly evolving financial markets can be dealt with more efficiently. And there is also research showing that common law countries tend to be more responsive to investors’ interests. Hence, in Hong Kong’s new pitch book to the global financial industry, it emphasises the city’s “common law system familiar to international investors”.

Research shows that a robust legal system is of paramount importance to financial development. It makes investors feel more comfortable and thereby expands the size of financial markets.

In our research, we’ve found that Hong Kong’s economic success since the 1997 handover can be attributed to the “one country, two systems” principle. We argue this is due to its common law system and because Hong Kong has been able to maintain an independent set of company and financial laws from the ones in China. 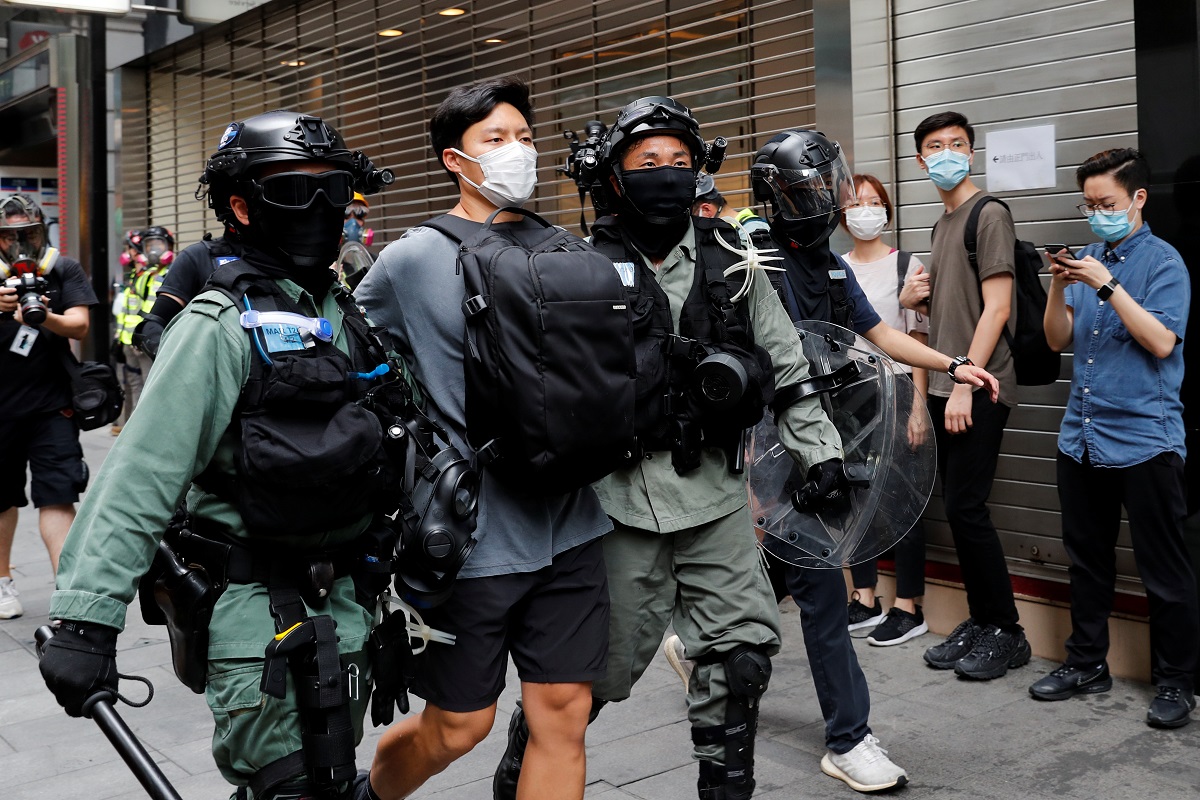 Riot police officers detain a demonstrator during a protest against the second reading of a controversial national anthem law in Hong Kong, China May 27, 2020. Photo: Reuters/Tyrone Siu

Nevertheless, the regulatory gap between Hong Kong and China is becoming narrower and narrower. Nowadays, China is doing very well in investor protection – something that has been recognised by both the Centre for Business Research at the University of Cambridge and World Bank research. Generally speaking, investor-protection mechanisms include corporate transparency, shareholders’ decision rights, and their rights to sue when things go wrong. All of this contributes toward investors feeling that their money is adequately protected.

When the two stock markets in China were established in the early 1990s, China did not even have a proper set of company and financial laws. But it has succeeded in writing the necessary laws and for the most part, making sure they are stuck to.

In 2009 the Chinese government decided to turn Shanghai into an international financial centre. Shanghai is now home to the fourth-largest stock exchange in the world in terms of market capitalisation, with Hong Kong the fifth. Shanghai has also recently leapfrogged Hong Kong to the fourth in the recent Global Financial Centres Index, showing its increasing global recognition and competitiveness.

There have been many economic initiatives in China over the years to create new financial centres. Some have been more successful than others but the strategies of development have been similar. They do not go much beyond financial incentives and offering investors a more open business environment. Yet Shanghai, and indeed the rest of mainland China, still suffer from limitations like currency control and impartiality of judges. To pose more threats to Hong Kong, deeper reform may be required to address these shortcomings.

China is introducing a more case-based approach to its legal system, reflecting the importance of the common law system for international investors. But before this development gains more traction, we believe that Hong Kong still occupies a unique position in China’s future economic development given the prominence of English legal principles in international finance and commerce. Traditional English legal principles, such as good faith and the legal concept of trusts, still lie at the heart of the legal language of modern commerce. These have yet to become embedded in mainland China’s legal system.