Britain, which administered Hong Kong until a 1997 handover to China whose terms were agreed in a Joint Declaration between London and Beijing, expressed concern over Wong's arrest. 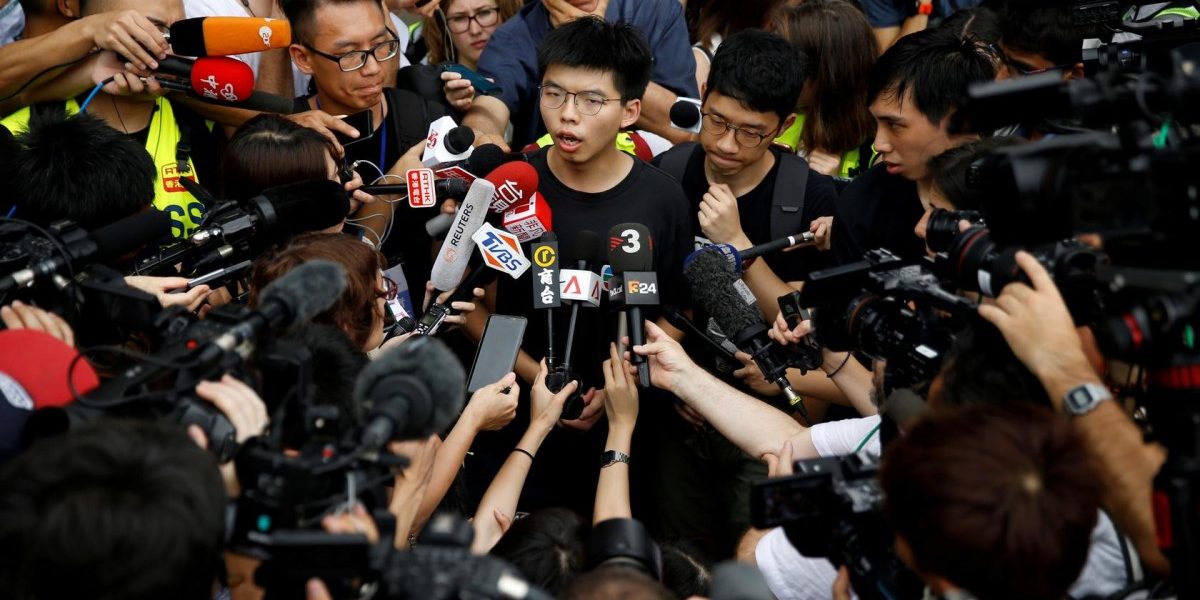 Pro democracy activist Joshua Wong talks to the media outside the Legislative Council during a demonstration demanding Hong Kong's leaders to step down and withdraw the extradition bill in Hong Kong, China, June 17, 2019. Photo: Reuters/Thomas Peter

Hong Kong: Hong Kong police arrested prominent democracy activist Joshua Wong on Thursday for participating in an unauthorised assembly in October 2019 and violating the city’s anti-mask law, according to a post on his official Twitter account.

Wong‘s latest arrest adds to several unlawful assembly charges or suspected offences he and other activists are facing related to last year’s pro-democracy protests, which prompted Beijing to impose a sweeping national security law on June 30, 2020.

Britain, which administered Hong Kong until a 1997 handover to China whose terms were agreed in a Joint Declaration between London and Beijing, expressed concern over Wong‘s arrest.

“I am deeply concerned about the arrest of Joshua Wong, another example of HK authorities targeting activists,” Foreign Secretary Dominic Raab said in a Tweet.

“Chinese and HK authorities must respect the rights and freedoms of the people of Hong Kong, as protected in the Joint Declaration,” he said.

The arrest of Wong, aged 23, comes around 6 weeks after media tycoon Jimmy Lai was detained on suspicion of colluding with foreign forces.

Wong had been a frequent visitor to Washington where he appealed to the US Congress to support Hong Kong‘s democracy movement and counter Beijing’s tightening grip over the global financial hub. His visits drew the wrath of Beijing, which says he is a “black hand” of foreign forces.

His long-time colleague, Agnes Chow, and two other activists were also among 10 people police arrested in August on suspicion of violating the new law.

The new law punishes anything China considers as subversion, secession, terrorism and collusion with foreign forces, with up to life in prison.

Wong was just 17 years old when he became the face of the 2014 student-led Umbrella Movement democracy protests, but he was not a leading figure of the often violent unrest that shook the semi-autonomous former British colony last year.

An anti-mask law was introduced last year in a bid to help police identify the protesters they suspected of committing crimes and it is facing a challenge in court. In the meantime, the Hong Kong government has made face masks mandatory in most circumstances due to the coronavirus pandemic.