Home-Grown Radicals a Weak Spot in Turkey's Fight Against ISIS

Turkey ranked fifth in terms of the highest levels of sympathy towards ISIS. 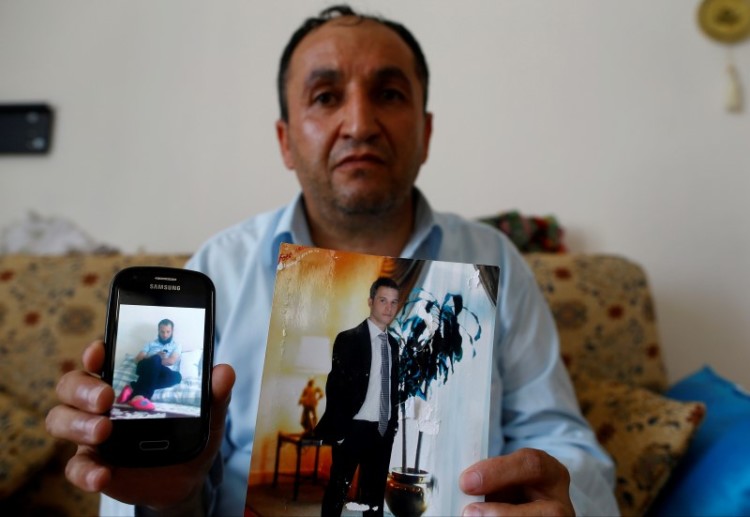 Tahir Kipcak shows photographs of his son Murat during an interview with Reuters in Istanbul, Turkey, May 31, 2016. Credit: Reuters/Osman Orsal

Istanbul: A few months after he started attending meetings of a hardline Islamic community group in a poor Istanbul suburb, 25-year-old Murat Kipcak stopped reading the Quran and going to the mosque.

He accused his conservative Kurdish family of being infidels and said their murder would get the killer to heaven.

Soon after, he sent word that he, his young child, and his wife had travelled to Iraq to join ISIS, his father Tahir told Reuters at his home in Sultanbeyli, a district on the eastern outskirts of Turkey’s largest city.

“We gave the police phone numbers, names, car plates, we gave them everything. But nothing happened,” Tahir said, saying he had reported his son’s departure to Iraq after the family grew increasingly concerned about his activities.

Three suicide bombers opened fire at the international terminal late on June 28 before blowing themselves up, killing 44 people and wounding more than 200 in one of the world’s busiest aviation hubs – a symbol of Turkey’s global standing.

The attackers are believed to have been ISIS militants from Russia, Kyrgyzstan and Uzbekistan, Turkish officials have said, but they appear to have relied on logistical support from ISIS cells in Turkey.

Police have detained 24 people in two days of raids across Istanbul on suspicion of involvement in planning the bombing, some of them in Sultanbeyli. In Fatih, another district near the city’s historic heart, a resident was cleaning graffiti off a home thought to have been used by the bombers.

“We don’t want a mukhtar sheltering ISIS,” the graffiti said, referring to the local elected official responsible for administration in the neighbourhood.

Turkey, part of the NATO military alliance and a member of the US-led coalition which has been bombing ISIS in Syria and Iraq, has been hit by at least half a dozen suicide attacks blamed on the group over the past year.

The deadliest was in the capital Ankara last October, a double suicide bombing at a rally of pro-Kurdish activists that killed more than 100 people. Prior to the airport attack, two in Istanbul this year have targeted foreign tourists, killing a total of 16 people, most of them German and Israeli.

Security forces have tightened controls on the Syrian border and deported or detained thousands of suspects in recent years, but intelligence experts say Turkey, like many European countries, is struggling to counter radicalisation at home and to adapt to the group’s new tactics.

“Are we prepared for the next attack? Unfortunately not,” said Hilmi Demir, a researcher at Ankara-based think-tank The Economic Policy Research Foundation of Turkey which specialises in extremist groups.

“A new set of strategies and tactics are needed and we need to understand why these people are radicalised … Islamic State has very powerful ideological tools. You can’t fight such groups with military and counter-terrorism measures alone.”

Turkey’s experience in countering militancy has been shaped by its fight against the Kurdistan Workers Party (PKK), which took up arms in 1984 demanding Kurdish autonomy in the southeast. Until the launch in 2012 of a peace process, which has since collapsed, it was a largely military campaign.

With ISIS, the challenge is more complex. A minority of people in Turkey, whose population is largely Sunni Muslim, have sympathy for the group’s ideology, if not its methods, several polls have shown.

Eight percent of Turks viewed ISIS favourably, a study by US-based company Pew in 11 countries with significant Muslim populations showed last November, with 19% saying they had no opinion. Turkey ranked fifth in terms of the highest levels of sympathy towards the group.

“A considerable part of the population in Turkey does not see groups like Islamic State or al-Nusra as terror groups. This shows how they can potentially find support,” said Suleyman Ozeren, a terrorism expert and head of the Ankara-based Global Policy and Strategy Institute.

Murat Kipcak made no secret of his plans to go to Syria and join ISIS, his father said, openly praising the group and socialising with others sympathetic to it. Like several other families contacted by Reuters, he said his warnings to the authorities went unheeded.

“The police say these people are going willingly and they have the freedom to travel, so it can’t stop them,” said a 25-year old resident of Bayrampasa, another working class Istanbul suburb, giving his name as Mehmet. He said his brother left to join ISIS in Syria in 2013.

The brother had since returned twice and last time left for Iraq, Mehmet said, declining to give his full name because his family is part of a police investigation.

Turkey was initially a reluctant partner in the US-led coalition against ISIS, arguing there could be no end to a war threatening regional stability without the departure of Syrian President Bashar al-Assad, and advocating for his ouster.

Critics say Ankara was too ready to back hardline Islamist groups fighting Assad, contributing to the conditions which enabled ISIS to take hold. Ankara denies such charges, saying it was quick to declare ISIS a terrorist group and that Turkey has the most to lose from its rise.

Turkish police have been monitoring the activities of suspected low-level Islamic State militants since as early as 2013, prosecution documents seen by Reuters show.

Aaron Stein, senior fellow at the Atlantic Council, said the authorities appeared not to intervene as part of a surveillance strategy to map out the network and target its leaders.

In the wake of June 28 night’s attack, police have stepped up their raids on suspected safe houses. But for Mehmet, whose brother has been incommunicado since 2015, it comes too late.

“These people who become militants in Syria are the boys of our neighbourhood. The police know them, where they hang out. But they say ‘gathering and talking about Islam is not a crime’,” Mehmet said. “And so it goes on.”