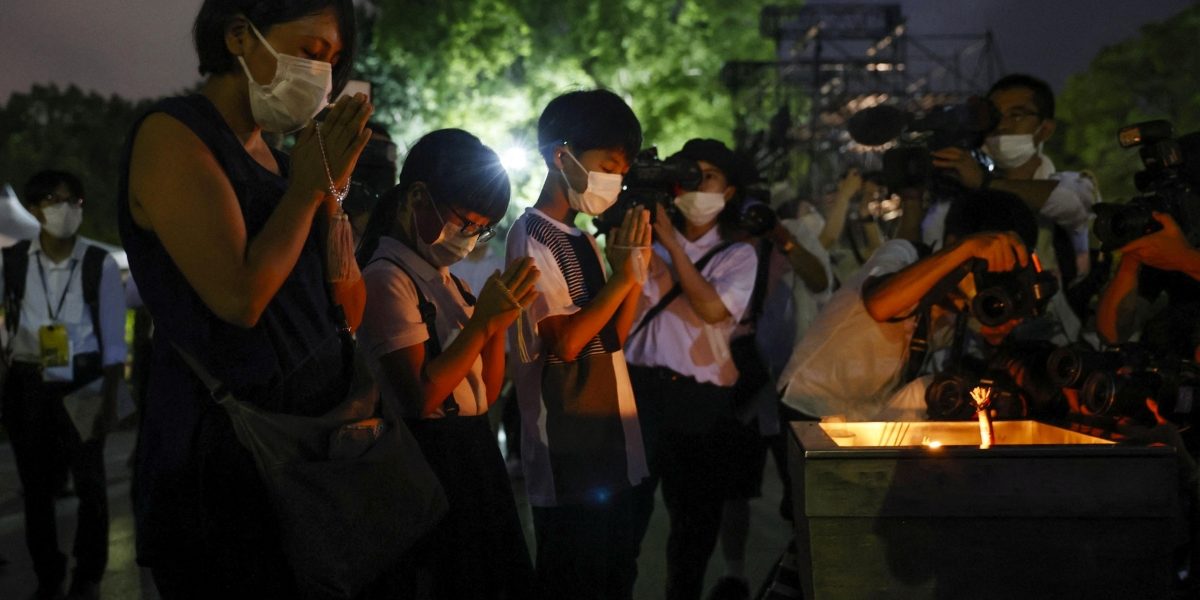 People pray in front of the cenotaph for the victims of the 1945 atomic bombing, on the 77th anniversary of the world's first atomic bombing, at Peace Memorial Park in Hiroshima, western Japan, August 6, 2022, in this photo taken by Kyodo. Photo: Kyodo via Reuters

Tokyo: Bells tolled in Hiroshima on Saturday as the city marked the 77th anniversary of the world’s first atomic bombing, with officials including the United Nations secretary general warning of a new arms race following Russia’s invasion of Ukraine.

Russia invaded Ukraine on February 24, and, shortly after, Russian President Vladimir Putin had obliquely raised the possibility of a nuclear strike. The conflict has also heightened concerns about the safety of Ukraine’s nuclear plants.

UN secretary-general Antonio Guterres joined the thousands packed into the Peace Park in the centre of the city to mark the anniversary of the bombing that killed 140,000 before the end of 1945, only the second time a UN secretary-general has taken part in the annual ceremony.

“Nuclear weapons are nonsense. They guarantee no safety – only death and destruction,” Guterres said.

“Three quarters of a century later, we must ask what we’ve learned from the mushroom cloud that swelled above this city in 1945.”

Guterres sidestepped a direct mention of Russia, which calls its invasion of Ukraine a “special military operation.” 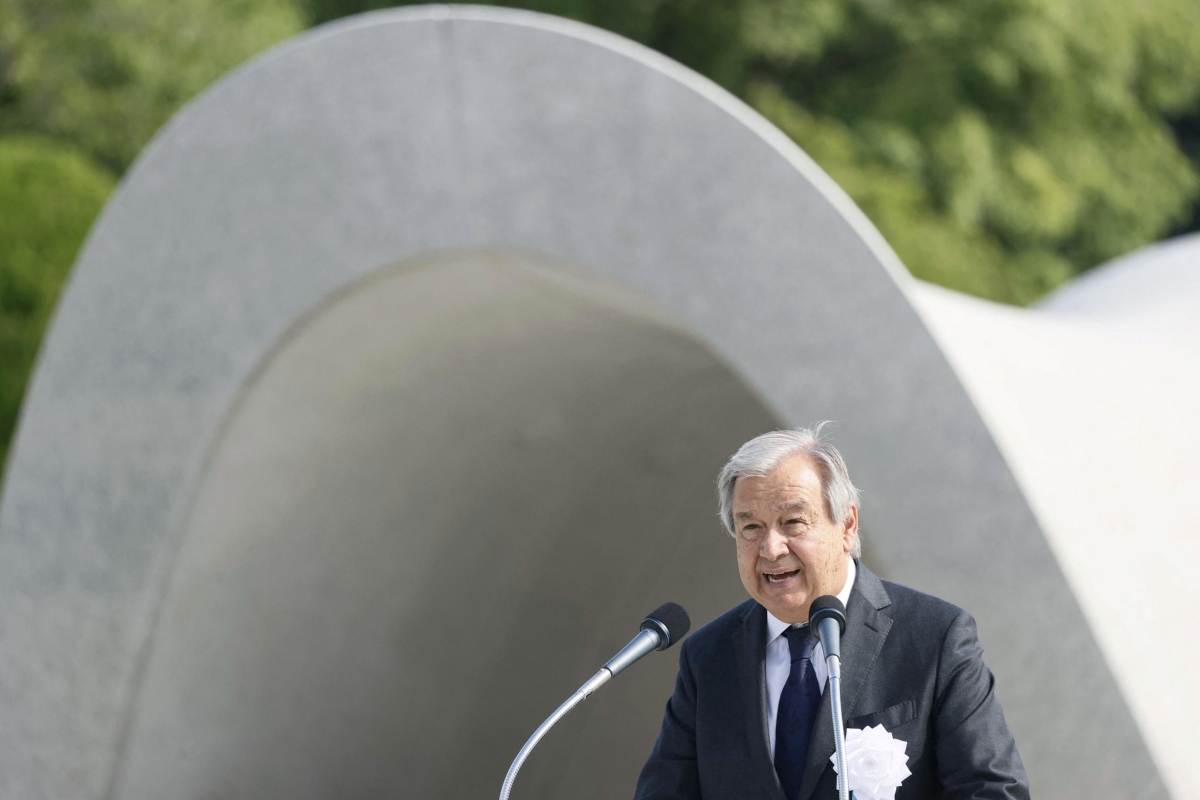 Hiroshima mayor Kazumi Matsui, whose city this year did not invite the Russian ambassador to the ceremony, was more pointed and critical of Moscow’s military actions in Ukraine.

“In invading Ukraine, the Russian leader, elected to protect the lives and property of his people, is using them as instruments of war, stealing the lives and livelihoods of civilians in a different country,” Matsui said.

“Around the world, the notion that peace depends on nuclear deterrence gains momentum,” Matsui added.

“These errors betray humanity’s determination, born of our experiences of war, to achieve a peaceful world free from nuclear weapons. To accept the status quo and abandon the ideal of peace maintained without military force is to threaten the very survival of the human race.”

At 8:15 am on August 6, 1945, the US B-29 warplane Enola Gay dropped a bomb nicknamed “Little Boy” and obliterated the city with an estimated population of 350,000. Thousands more died later from injuries and radiation-related illnesses.

On Saturday, as cicadas shrilled in the heavy summer air, the Peace Bell sounded and the crowd, including Prime Minister Fumio Kishida, who is from Hiroshima, observed a moment of silence at the exact time the bomb exploded.

“At the start of this year, the five nuclear-weapon states issued a joint statement: ‘Nuclear war cannot be won and must never be fought,'” Matsui added.

“Why do they not attempt to fulfil their promises? Why do some even hint at using nuclear weapons?”

On Thursday, Russian ambassador to Japan Mikhail Galuzin offered flowers at a memorial stone in the park and told reporters his nation would never use nuclear weapons.

Kishida, who has chosen Hiroshima as the site of next year’s Group of Seven summit, called on the world to abandon nuclear weapons.

Earlier this week, he became the first Japanese leader to take part in the Review Conference of the Parties to the Treaty on the Non-Proliferation of Nuclear Weapons (NPT).

“We will continue towards the ideal of nuclear disarmament even given the current tough security environment,” he said.

In Hiroshima, Kishida also told Guterres that he strongly condemned China’s recent ballistic missile launches as “a serious issue concerning Japan’s security and the safety of Japanese people”, according to a Saturday news release issued by the Ministry of Foreign Affairs.

Kishida repeated the phrases he used a day earlier during a meeting with US House of Representatives Speaker Nancy Pelosi, whose visit to Taiwan this week prompted an angry China to hold unprecedented live-fire drills in which five missiles landed in Japan’s exclusive economic zone.

Kishida said he would work closely with Guterres in the wake of China’s action that “gravely affects peace and stability of the international community”, the release said.