Australian diplomats were refused access to Beijing's No.2 Intermediate People's Court last May where Yang was tried on unspecified espionage charges because China said the case involved state secrets. 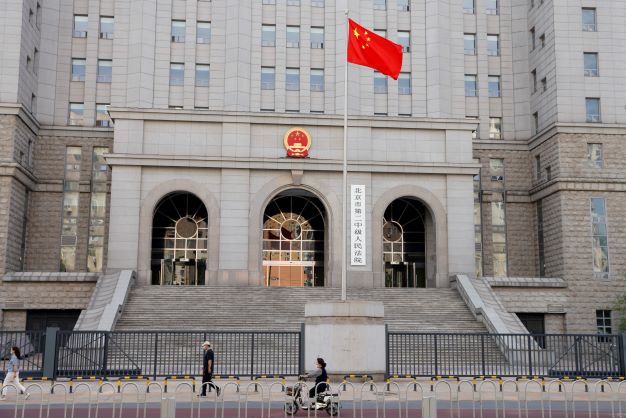 People walk past one of the entrances of Beijing No. 2 Intermediate People's Court where Australian writer Yang Hengjun is expected to face trial on espionage charges, in Beijing, China May 27, 2021. Photo: Carlos Garcia Rawlins via Reuters

Sydney: The Australian government and human rights groups said they are concerned about the deteriorating health of Australian blogger Yang Hengjun, three years after he was detained in China, with a Beijing court yet to deliver a verdict in an espionage trial heard in secrecy eight months ago.

An Australian citizen born in China, Yang wrote about Chinese democracy and United States politics online as a high-profile blogger and also penned a series of spy novels.

Immediately before he was detained at Guangzhou airport, three years ago on Wednesday, he had been living in New York, where he was a visiting fellow at Columbia University. He has denied working as a spy for Australia or the United States.

Diplomatic ties between Australia and China have deteriorated sharply since 2019, when Yang was arrested, with China imposing trade sanctions on some imports from Australia and reacting angrily to its call for an international inquiry into the origins of the coronavirus.

In messages to friends and family dictated from prison, Yang said he shifted between pessimism and optimism, and he wanted the Chinese government to publish details of his case openly.

“When I was outside, one of my objectives was to advocate for rule of law. I didn’t believe that I would end up becoming a victim of rule by power,” Yang wrote in a message that was circulated by friends and viewed by Reuters.

Australian diplomats were refused access to Beijing’s No.2 Intermediate People’s Court last May where Yang was tried on unspecified espionage charges because China said the case involved state secrets.

China’s courts have a conviction rate of well over 99%, and public and media access to sensitive trials is typically limited.

Australia’s foreign minister, Marise Payne, called for his release and said Yang has had no access to his family and only limited and delayed access to lawyers since he was detained by Chinese authorities three years ago.

“We are very concerned that the verdict from this trial has been subject to numerous delays,” she said in a statement on Tuesday.

“Neither Dr Yang nor the Australian Government have been provided with details as to the charges against him or the investigation, reinforcing our view that this constitutes the arbitrary detention of an Australian citizen.” (sic)

Australia was “extremely concerned about Dr Yang’s health”, she added, and called on Chinese authorities to meet obligations to provide treatment.

“We are very concerned that Yang’s detention has exacerbated his medical problems and that the treatment in prison is inadequate,” she said.

Yang’s friends told Reuters his worsening health problems include gout, dizzy spells, inability to walk at times, high blood pressure and blood tests that showed he was at risk of kidney failure.

Any hope for him to be released for medical treatment cannot occur until he is sentenced, which has been delayed until April, his supporters said.