Monday was the bloodiest single day for Palestinians since the Gaza conflict in 2014. Palestinian health ministry officials said 55 protesters were killed and 2,700 injured either by live gunfire, tear gas or other means. 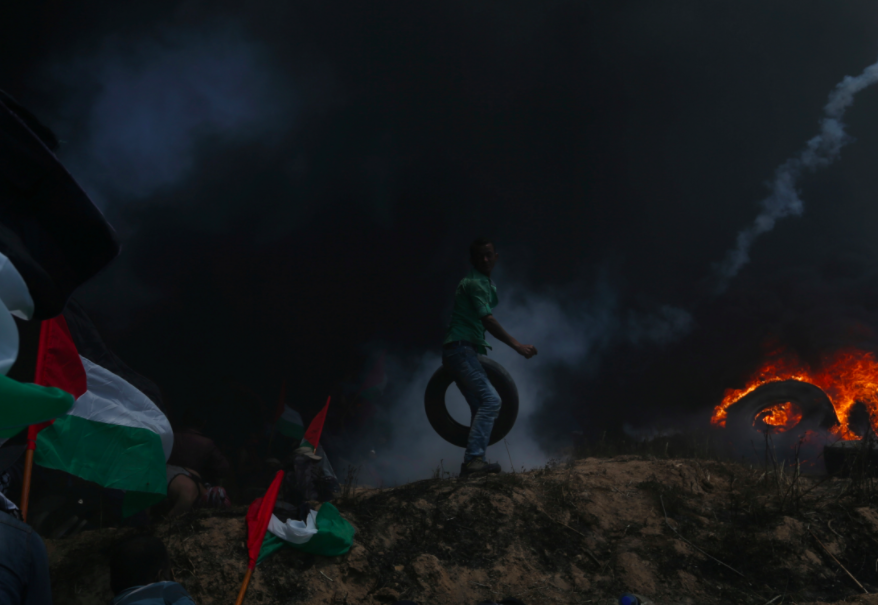 A Palestinian demonstrator carries a tire as others take cover from Israeli fire and tear gas during a protest against U.S. embassy move to Jerusalem and ahead of the 70th anniversary of Nakba, at the Israel-Gaza border in the southern Gaza Strip May 14, 2018. Credit: Reuters/Ibraheem Abu Mustafa

White House spokesman Raj Shah accused Hamas‘s leaders of making a “gruesome and unfortunate propaganda attempt” that led to the clashes in Gaza at the same time the US was opening its new embassy in Jerusalem, a move that has fuelled Palestinian anger.

Speaking to reporters at a White House briefing, Shah also declined to join with other countries, including France and Britain, in calling for Israel to exercise restraint in its response to the protests.

The White House instead reiterated the Trump administration’s refrain, in response to weeks of violence on the Israel-Gaza border, that Israel had a right to defend itself.

“The responsibility for these tragic deaths rests squarely with Hamas,” Shah said. “Hamas is intentionally and cynically provoking this response.”

Monday was the bloodiest single day for Palestinians since the Gaza conflict in 2014. Palestinian health ministry officials said 55 protesters were killed and 2,700 injured either by live gunfire, tear gas or other means.

The Israeli military said it was responding to violence from the protesters to defend Israel’s border. Israeli Prime Minister Benjamin Netanyahu said Israel’s actions were self-defense against the enclave’s ruling Hamas group.

Despite the Gaza violence and Palestinian outrage over the embassy move from Tel Aviv, Shah insisted there was no reason to believe there would be any damage to the Trump administration’s Israeli-Palestinian peace efforts.

The White House has offered few details on a peace plan that is still being finalised and which has drawn widespread skepticism even before its unveiling. The Palestinians say they have lost faith in the Trump administration to act as a fair mediator and have boycotted the process since President Donald Trump’s Jerusalem announcement in December.

“I don’t think it hurts the peace plan,” Shah said. “The peace plan will be introduced at the appropriate time.”

In contrast to the scenes in Gaza, Israeli dignitaries and guests attended a ceremony in Jerusalem to open the US Embassy following its relocation from Tel Aviv. The move to Jerusalem upended decades of US policy toward Jerusalem. Palestinians want East Jerusalem as the capital of their future state.

Israel regards all of the city, including the eastern sector it captured in the 1967 Middle East war and annexed in a move that is not recognised internationally, as its “eternal and indivisible capital.”

Most countries say the status of Jerusalem – a sacred city to Jews, Muslims and Christians – should be determined in a final peace settlement and that moving their embassies now would prejudge any such deal.