After Hurricane Matthew, Women Lead the Road to Recovery in Haiti

Courageous women in Haiti are ready to lead short-term relief and they’ll be there rebuilding long after international aid efforts have left. 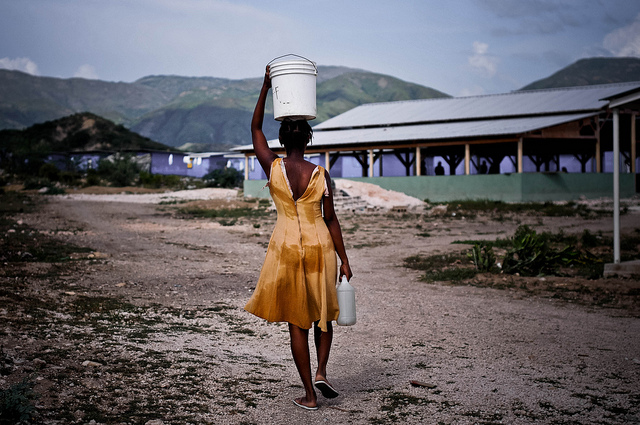 Courageous women in Haiti are ready to lead short-term relief and they’ll be there rebuilding long after international aid efforts have left. The devastation in Haiti following Hurricane Matthew is extreme. According to recent estimates, the hurricane left more than 900 people dead and 2.1 million affected. Ninety percent of some areas of southern Haiti are reportedly destroyed and the lack of clean drinking water carries threats of a cholera crisis.

Although international media has largely shifted its focus, local, grassroots, women-led groups are actively surveying the situation, working quickly to address the immediate needs of women and children and standing ready to lead recovery and relief.

“There is so much damage and destruction – houses, plantations, livestock. Everything has disappeared and many people died,” explain Mikelita Jean and Malia Jean, coordinators of Global Fund for Women grantee partner Association des Femmes Haïtiennes Infectées et Affectées par le VIH (Association of Haitian Women Living With and Affected By HIV or AFHIAVIH), which was founded in 2007 to empower and meet the unique needs of women and children affected by HIV in Haiti. “People are in the street because even the shelters have been destroyed. Women and girls are the most vulnerable.”

Women on the ground in Haiti emphasise the urgent need for shelter for women and children. They say that children are in the streets naked and exposed to the extreme sun, and women are getting vaginal and bladder infections due to a lack of sanitary conditions, clean water or clean underwear and clothing.

Evelyne Denis, a nurse who works with Groupe d’Appui au Développement du Sud (Support Group for Development of the South, or GADES), spoke with us from Les Cayes, one of the towns in southern Haiti hardest hit by Hurricane Matthew. In addition to shelter, the biggest need right now, she says, is food and clean drinking water. Evelyne and others are trying to treat the wounded as best they can, with limited medical supplies.

The looming spread of cholera is bringing renewed fear that the situation could worsen. “We face another potentially catastrophic threat, cholera, as the drinking water supply is not clean,” says Elvira Eugene from Global Fund for Women grantee partner Association Femmes Soleil D’Haiti (Sun Women’s Association of Haiti, or AFASDA), which has been building a powerful grassroots movement to advance women’s human rights in Haiti since 1997.

Despite the severe destruction from Hurricane Matthew, women in Haiti are ready to lead recovery. Global Fund for Women’s grantee partners are already acting to fill gaps in immediate relief.

These local, women-led groups with deep roots in their communities are in a unique position to assess the damage and effectively address the unique needs of women and children. After the 2010 earthquake in Haiti, much international aid was misused. But the money that went directly into the hands of local, grassroots women’s groups helped them not only fill gaps in immediate relief but rebuild their communities and empower women in the years that followed.

Women and children are disproportionately affected by crises and can be at increased risk of violence in the aftermath of disasters. Relief workers often overlook women’s health-care needs – like access to sanitary napkins and contraception, and maternal, newborn and post-natal care..

In Haiti, as after the 2010 earthquake, disaster can pose a severe risk to women in terms of increased sexual violence and erosion of women’s rights. But local women’s groups are able not only to provide women with information on accessing services and shelter, but to educate and empower them about their human rights.

Global Fund for Women’s experience – including over 20 years of grant-making in Haiti – has shown how critical it is that women play leading roles in immediate crisis relief and response, as well as in long-term recovery and rebuilding. Investing directly in local women’s groups in Haiti is absolutely critical following Hurricane Matthew.

Global Fund for Women’s grantee partners are already on the frontlines of immediate relief and recovery, with an eye toward the acute needs of women and children.

“We have collected a list of cases to help KOFAVIV members find their families in extremely difficult circumstances,” explains Josie Philistin from KOFAVIV, the Commission of Women Victims for Victims, which a group of rape survivors formed in 2004 to meet the needs of thousands of women and children who have survived sexual violence and slavery. “Through our call centre, a free national hotline, we receive calls requesting aid for prevention and control against cholera and violence, as well as for assistance with hygiene kits and basic supplies.”

These women activists are developing plans of action to ensure that funding is used most effectively to get services and assistance to those who need it most. For instance, Nadine Louis, executive director of Foundation TOYA, which operates a girls club in Les Cayes, shared that they are focusing on girls’ needs, ensuring their safety, and helping them to get back to school, as most schools have been damaged and remain closed.

“Girls, after any disaster, are usually the last to receive the help or attention they need. All too often, they become victims,” expressed Nadine. “Funding will help us ensure that girls have access to [Foundation TOYA’s] girls’ center in Les Cayes, have school supplies and have safe spaces to go as rehabilitation efforts begin.”

It is critical to fill the gap in funding to ensure that money and attention goes directly to these grassroots women’s groups – and that they are trusted to use the money as only they know best. Haiti is the poorest nation in the Western Hemisphere and largely dependent on international aid, which often does not reach the grassroots or women’s groups.

“Women’s groups desperately need funding,” explains Global Fund for Women’s advisor Tania Pierre-Charles in Port-au-Prince. She added that money will “make a world of difference for grassroots organizations to be able to recover their work space and resume the provision of their vital services to women and girls at this critical time.”

Courageous women in Haiti are ready to lead short-term relief and they’ll be there rebuilding long after international aid efforts have left. It’s time for the international community to spotlight the courage and resilience of women in Haiti, and invest in them as the powerful leaders and changemakers they are – now more than ever.

Anna Tenuta is the campaigns and communications manager for the Global Fund for Women.

This piece was originally published in Foreign Policy In Focus.