"There was no legal basis for China to claim historic rights to resources within the sea areas falling within the 'nine-dash line'," the court said. 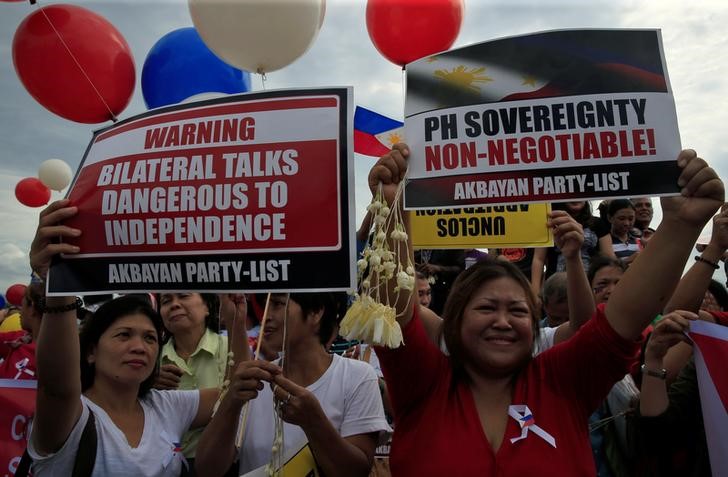 Protesters display placards during a rally by different activist groups over the South China Sea disputes, along a bay in metro Manila, Philippines July 12, 2016. Credit: Reuters

Amsterdam/Beijing: An arbitration court ruled on Tuesday that China has no historic title over the waters of the South China Sea and that it has breached the sovereign rights of the Philippines with its actions there, a long-awaited ruling sure to infuriate Beijing.

China, which has boycotted the hearings at the Permanent Court of Arbitration in The Hague, vowed again to ignore the ruling and said its armed forces would defend its sovereignty and maritime interests.

And China’s defence ministry announced that a new guided missile destroyer was formally commissioned at a naval base on the southern island province of Hainan, which has responsibility for the South China Sea.

“China will respond with fury, certainly in terms of rhetoric and possibly through more aggressive actions at sea.”

China claims most of the energy-rich waters through which about $5 trillion in ship-borne trade passes every year. Neighbours Brunei, Malaysia, the Philippines, Taiwan and Vietnam also have claims.

Finding for the Philippines on a number of issues, the panel said there was no legal basis for China to claim historic rights to resources within its so-called nine-dash line, which covers much of the South China Sea.

It said China had interfered with traditional Philippine fishing rights at Scarborough Shoal, one of the hundreds of reefs and shoals dotting the sea and had breached the Philippines’s sovereign rights by exploring for oil and gas near the Reed Bank, another feature in the region.

None of China’s reefs and holdings in the Spratly Islands entitled it to a 200 mile exclusive economic zone, it added.

“No matter what kind of ruling is to be made, Chinese armed forces will firmly safeguard national sovereignty, security and maritime interests and rights, firmly uphold regional peace and stability and deal with all kinds of threats and challenges,” China’s defence ministry said earlier in a bilingual Chinese and English statement shortly before the ruling was made public.

The ruling is significant as it is the first time that a legal challenge has been brought in the dispute, which covers some of the world’s most promising oil and gas fields and vital fishing grounds.

It reflects the shifting balance of power in the 3.5 million sq km sea, where China has been expanding its presence by building artificial islands and dispatching patrol boats that keep Philippine fishing vessels away.

The US and China often conduct military exercises in the area and regularly accuse each other of militarising the region.

“Our experts are studying the award with the care and thoroughness that this significant arbitral outcome deserves,” Philippine foreign affairs secretary Perfecto Yasay told a news conference, reading from a prepared statement.

“We call on all those concerned to exercise restraint and sobriety. The Philippines strongly affirms its respect for this milestone decision as an important contribution to the ongoing efforts in addressing disputes in the South China Sea.”

Japan said the ruling was legally binding and final.

US diplomatic, military and intelligence officers said China’s reaction to the court’s decision will largely determine how other claimants, as well as the US, respond.

If, for example, China accelerates or escalates its military activities in the disputed area, the US and other nations will have little choice but to respond with new and possibly enlarged and multinational maritime freedom of navigation and aerial missions, the US officials said, speaking on the condition of anonymity.

Contingency planning for such exercises is already completed or is in its final stages, said one of the officials, who quickly added: “We hope it doesn’t come to that.”

Oil prices jumped following the findings from The Hague, with international Brent crude futures up over a dollar, or more than 2%, to $47.29 per barrel at 9:32 am GMT.

The deep waters of the South China Basin between the Spratly and also-disputed Paracel Islands are the most direct shipping lane between northeast Asia’s industrial hubs of China, Japan and South Korea and Europe and the Middle East.

The case, brought by the Philippines in 2013, hinged on the legal status of reefs, rocks and artificial islands in the Scarborough Shoal and Spratly Island group.

Manila’s 15-point case asked the tribunal to rule on the status of the nine-dash line, a boundary that is the basis for its 69-year-old claim to roughly 85% of the South China Sea.

The court has no power of enforcement, but a victory for the Philippines could spur Taiwan, Vietnam, Malaysia and Brunei to file similar cases.

Ahead of the ruling, around 100 members of a Philippine nationalist group demonstrated outside the Chinese consulate in Manila on Tuesday, calling on Beijing to accept the decision and leave the Scarborough Shoal, a popular fishing zone off limits to Filipinos since 2012.

Spreading fast on social media in the Philippines was the use of the term “Chexit” – the public’s desire for Chinese vessels to leave disputed waters.