Down the H-1B Discussion Hole: What the Other Side Says

Discourse on internet forums throws up allegations of "reverse discrimination" even as hate crimes against Indians rise in the US. 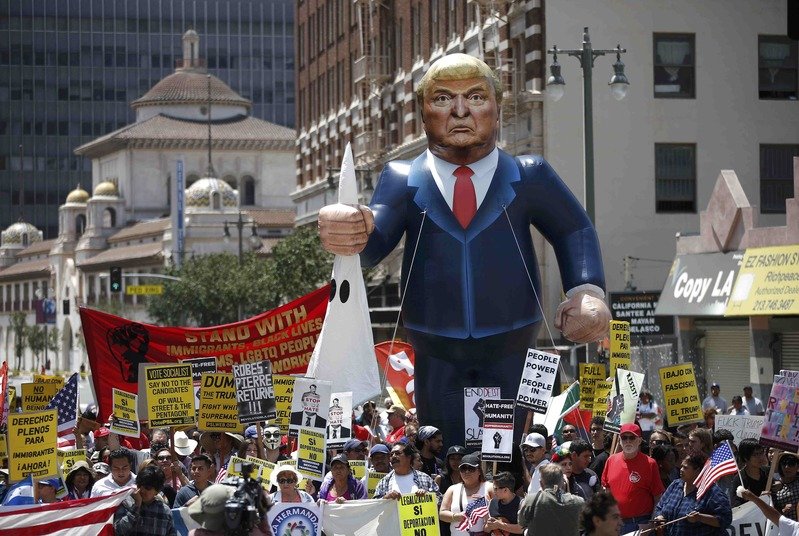 People march with an inflatable effigy of Donald Trump during an immigrant rights protest. Credit: Reuters/Files

Washington: Anti-immigration advocates have got a new lease of life from US President Donald Trump. Operating on the edges for years, their websites are now chirping and their ideas are being discussed on prime time.

The discussion forums have made the H-1B visa an object of hate and abuse with their relentless focus on how Indians are stealing American jobs. Some websites are more incendiary than others but they all open a window into the “new” America where immigrants, especially those from India, are not welcome.

Strangers from Kansas to Washington are asking Indians to “Get out of my country”. Srinivas Kuchibhotla paid this new America with his life, his friend Alok Madasani with a wound, while Deep Rai was injured in his own driveway by a semi-masked man who wanted him to go back to his country.

By now an anti-foreigner video made by Steve Pushor, a computer programmer, of Indian families enjoying a day in the park near Columbus, Ohio, has gone viral. In the video, Pushor walks around secretly taping women talking, children on the swings and men playing volleyball while lamenting the takeover of the community by Indians. He says at one point the Indians have “ravished the Midwest”.

Pushor posted the video last August, according to Buzzfeed, and it created some discussion on Facebook and Reddit. It resurfaced after Kuchibhotla’s killing.

Much of what is being expressed openly now has been around on websites such as AmericanPatrol.com, ProjectUSA.org, Americans For Immigration Control and ProtectUSWorkers.org, among others. NumbersUSA, also an anti-immigration website, is the most reasoned and invites Americans of all ethnicities but it wants to bring down the number of immigrants from the current one million to half a million per year.

Does the dawning of the Age of Trump mean a slow sunset on the American dream for thousands of Indians and Indian Americans? Clearly, the wave of violence, hate crimes, bullying and abuse against immigrants, and especially against H-1B workers, is rising. There is enough documentation to prove that.

The 3.1 million-strong Indian American community is at risk because to the bigots and racists, all brown-skinned people are job stealers, all Sikhs are Muslims and all Muslims are potential terrorists. “Imagine a Muslim-free America,” was a poster by Vanguard America, a white supremacist group, found pinned at Texas State University. Recruitment of students by such groups is on the rise, according to the Anti-Defamation League.

But what do anti-immigration activists want? It’s instructive to know the other side of the story to fully understand the debate that has triggered at least four bills in the US Congress trying to restrict H-1B visas. The Trump administration has already announced a temporary suspension of expedited processing of H-1Bs and is working to reverse the H-4 visas, which allow H-1B spouses to work in the US.

Sara Blackwell, a lawyer and a vocal anti-immigration advocate, is worth reading. Last November she called H-1B reform “a great start” but demanded change in other visas as well to disrupt the current business model. Companies will simply pay managers “to go to India, Mexico and other foreign countries to do direct training overseas”.

“The end game will continue,” she wrote, and the “goal” of eliminating jobs in America, “will not be stopped.” She offered a “simple” solution – pass a law that prohibits Americans’ “private data” to leave the virtual borders of the US. “If the private data must stay in the USA, then most of the jobs offshored will no longer be possible to do overseas,” Blackwell wrote on her website ProtectUSWorkers.org.

Some jobs will “immediately” come back to the US. If a foreign company wants to compete for American business, which requires private data, it will have to open offices in the US and hire American workers.

Roy Beck, founder of NumbersUSA, was particularly excited after Trump’s speech to the Congress on February 28 where the president talked about changing the legal immigration system to benefit American workers. “Protecting our workers also means reforming our system of legal immigration. The current, outdated system depresses wages for our poorest workers, and puts great pressure on taxpayers,” Trump said. His statement was also welcomed by Richard Trumka, president of the largest labour union AFL-CIO.

Beck’s arguments for controlled and lower immigration are based on the reports of two US government commissions headed by distinguished Americans. Both commissions recommended cutting immigration numbers by half to help Americans already vulnerable and to meet environmental goals.

Beck argues for immediately eliminating three categories of immigration – extended-family immigration or what he calls “chain migration,” the visa lottery system, and employment-based visas for foreign workers, except those with extraordinary skills. “Annual immigration should be set at a level that allows stabilisation of US population and long-term sustainability of the American quality of life,” Beck says on his website.

To his credit, he also says: “Immigrant bashing, xenophobia, nativism, and racism are unacceptable responses to federal immigration policy failures. Race and ethnicity should play no role in the debate and establishment of immigration policy.”

But that’s not the case with many other anti-immigration sites. Some of the ‘Popular Topics’ on Blackwell’s website are: “Indians hiring other Indians over qualified Americans,” “Credit Card Fraud: Ask yourself how safe is your info. In India,” and “US does not have a talent shortage – Stop H-1B visa.” The threads have links to BBC exposes and Indian TV reports.

Comments, which appear to be genuine for the most part, relate several stories of “reverse discrimination” by Indian managers against American workers while hiring. References abound to alleged kickbacks, hostile working conditions, insular attitude of Indian managers, and their tendency to speak in their own language to make others feel unwanted and unconnected.

A man identified as Kevin posted on December 7 last year:

“I had an Indian manager who would ALWAYS overlook(ed) qualified local candidates in favor of bringing in Indian candidates, often waiting 2-3 months for their H1B visas to clear, and in the meantime forcing everyone else to work nights and weekends to make up for it. One of my responsibilities was interviewing candidates, but I was quickly removed from that role when I would recommend local qualified (and non-Indian) candidates who could have started immediately.”

“I went to a high paying tech “interview” at B****berg 2 years ago, and knew the minute I went into the room that it was a waste of my time. The manager and the other 5 guys were Indian. 2 of the people in the room did not speak English.”

In response, “Anonymous” who explained that he was a north Indian and himself “heavily discriminated,” wrote: “Let me tell you that these guys are from South India– you can tell from their look, height and mannerism– and from caste ridden society. Indians from other areas becoming more egalitarian….”

He went to explain why Indian managers allegedly don’t hire Americans. It’s because:

“1) You will be whistle blower and inform about their kickbacks and hiring practices. It will be their absolute nightmare

3) You don’t gel in their environment–they avoid speaking English and stick to their culture. It is always cumbersome to deal with cross cultures.”

Make what you will of the exchange above, but it’s interesting that Indian H-1B workers seem to corroborate the insular, inbred environment of large Indian IT companies. Across discussion boards, there are many posts by Indians complaining along similar lines. Poshur, who stalked Indian families and posted a video, has a long interview with an unidentified Kolkata-based Indian H-1B worker on his website SaveAmericanITJobs.org or SAITJ.

In written answers, this worker said he was hired by TCS and allegedly mistreated and forced to return to India after his second employer also abused him, threatened deportation and stopped paying him. He said the companies exploit the desperation of young men whose qualifications are often sub standard.

The first generation of IT workers who came to the US were far superior to the second generation that is mainly coming from Andhra Pradesh and Telangana. “There are numerous rackets operating who provide false degree certificates to students in exchange of money. In the US there are lot of fake universities are operating. Examples include TriValley University and the recent Silicon Valley University (SVU),” he wrote.

Major Indian IT companies allegedly work on “sweatshop like model” with little or no transparency. “They treat their workers as slaves,” he wrote. The working conditions are “horrible” and most of the work force is South Indian, he claimed. “By unscrupulous means they drive out whatever American people are in the project. They do it by means of intimidation, bad behavior and other means. They favor their own people and create a complete monopoly over the project. Then they offshore the whole project to India.”

Fake resumes and degrees are common and the H-1B market is replete with job brokers who work on a commission basis, taking a huge cut from the worker’s salary. Most of the workers are concentrated in New Jersey, New York, Delaware and Texas.

There is apparently a way around every stipulation in the H-1B process. Under the law, an employer must prove there is a shortage of talent in the US but companies get around it by placing a classified ad and then simply disqualifying all those who apply on one pretext or another. Sometimes, when the candidate is clearly superior, the interviewers allegedly find a way to knock him down by getting either nasty or asking irrelevant questions to throw him off.

But Indian companies are not the only villains in the story – US multinationals are also severely criticised for being “killers” of American jobs. IBM is particularly derided by Blackwell and others for shifting jobs overseas.

In a post on March 3, Blackwell called IBM “seedy, greedy and mean” for starting a new policy of relocating US workers and if they wanted to keep their jobs. She called it a “great method” to force workers to quit while hiring more “overseas, cheap, exploited labor.”

A post on SAITJ said IBM uses a loophole in the green card lottery system to import “skilled workers.” The company pushes its employees overseas to participate in the lottery to lure them to a job in the US in case they win. But their wages are allegedly three times below what an American gets. “IBM should be investigated and punished for manipulating the system,” said this post by Anonymous on SAITJ.

After reading through hundreds of posts, what becomes clear is that laid off workers in America “get it” – the ultimate responsibility rests with US companies and their unbridled desire for profit, no matter how they couch it and with the US Congress.

This post by on SAITJ says it clearly: “I work for a company that makes billions in profit. That company is now moving jobs off shore because apparently billions in profit is still not enough. I have over 40 years in the business, and I am making less than I was 20 years ago.”