The attacker acted alone and posted an antisemitic hate message on Amazon's gaming subsidiary 'Twitch' before the attack. 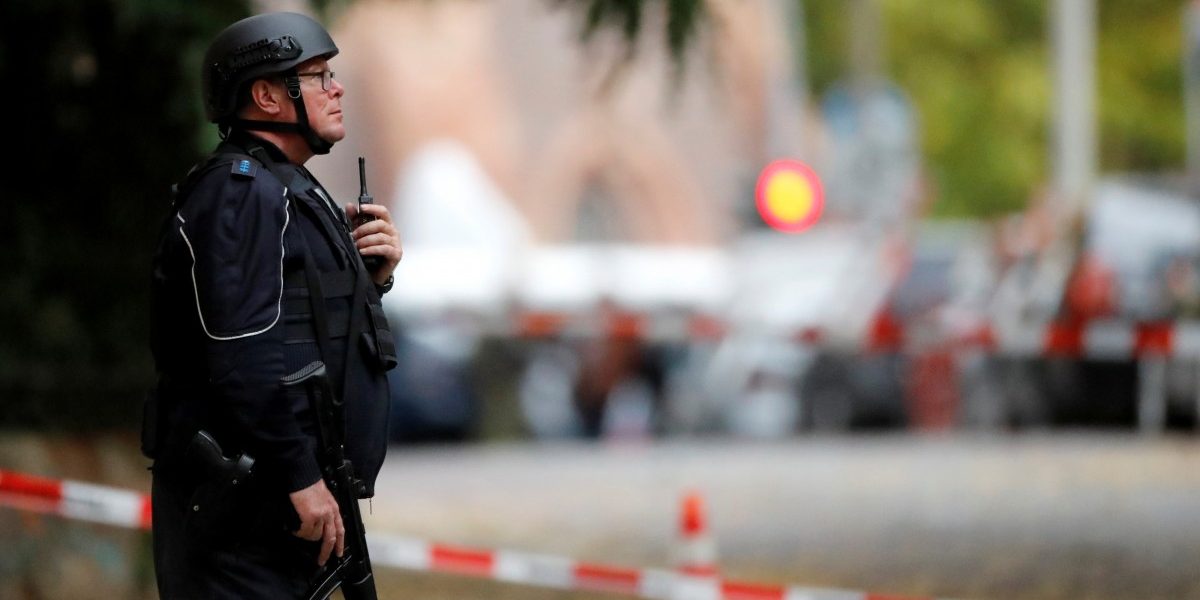 A police officer stands next to the site of a shooting, in which two people were killed, in Halle, Germany October 9, 2019. Photo: Reuters/Hannibal Hanschke

Berlin/Halle: A gunman who denounced Jews opened fire outside a German synagogue on Yom Kippur, the holiest day of the Jewish year, and killed two people as he livestreamed his attack.

Several German media outlets said the perpetrator acted alone on Wednesday in the eastern German city of Halle. He fatally shot a woman outside the synagogue and a man inside a nearby kebab shop.

Two other people were seriously injured, but regional broadcaster MDR said their condition was not critical.

Police said they had detained one person, reported by German magazines Spiegel and Focus Online to be a 27-year-old German named Stephan B. His full name cannot be published under German privacy laws.

Video broadcast on Amazon’s gaming subsidiary Twitch showed a young man with a shaven head first reciting a short statement in broken English while sitting in a parked car.

“I think the Holocaust never happened,” he began, before adding “feminism is the cause of decline in birth rates in the West” and mentioning mass immigration. He concluded: “The root of all these problems is the Jew”, before embarking on his shooting spree. 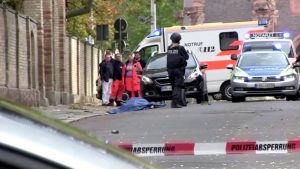 First responders look on as a police officer stands in a secured area with a covered body after a fatal shooting in Halle, Germany October 9, 2019. Photo: Nonstopnews/Reuters TV

A spokeswoman for Amazon said Twitch “worked with urgency to remove this content and will permanently suspend any accounts found to be posting or reposting content of this abhorrent act.”

The company later said its investigation suggested that “people were coordinating and sharing the video via other online messaging services,” but did not elaborate.

Reuters found copies and links to the footage posted on Twitter, 4chan and message boards focused on trolling and harassment, as well as multiple white supremacist channels on messaging app Telegram.

In the video, the man drove to the synagogue, found the gates shut and unsuccessfully sought to force the gates open. He then shot several rounds at a woman passerby.

“We saw via the camera system at our synagogue that a heavily armed perpetrator with a steel helmet and a gun tried to shoot open our doors,” Max Privorozki, Halle’s Jewish community chairman, told the Stuttgarter Zeitung newspaper.

“We barricaded the doors from inside and waited for the police,” he said, adding that about 70 to 80 people were inside the synagogue observing Yom Kippur, known as the Day of Atonement which is marked by fasting and solemn prayer.

The Frankfurter Allgemeine Zeitung reported, without citing its source, that when he was detained the suspect had a wound to the neck and that security authorities suspected he had attempted suicide.

Merkel visited a Berlin synagogue as around 200 people, some holding Israeli flags and candles, held a vigil outside. Merkel’s spokesman tweeted: “We must oppose any form of anti-Semitism.” 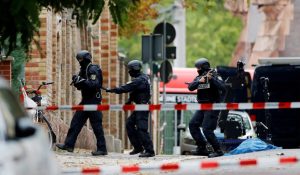 Police officers work at the site of a shooting in Halle, Germany, October 9, 2019. Photo: Reuters/Hannibal Hanschke

Rifat Tekin, who worked at the Halle kebab outlet, said he was making a kebab for two construction workers when a perpetrator threw an explosive at the restaurant before shooting.

“He was very calm, like a professional,” Tekin told n-tv television. “He didn’t say anything. He just kept coming and shooting … I was hiding behind the salad counter.”

Israeli Prime Minister Benjamin Netanyahu sent condolences to the victims’ families and said in a Twitter post: “The terrorist attack against the community in Halle in Germany on Yom Kippur, the holiest day of our nation, is yet another expression that anti-Semitism is growing in Europe.”

“I call upon the authorities in Germany to continue to work determinedly against the phenomenon of anti-Semitism.”

Anti-semitism is a particularly sensitive issue in Germany, which during World War Two was responsible for the genocide of 6 million Jews in the Nazi Holocaust. Around 200,000 Jews live today in the country of around 83 million people.

Interior Minister Horst Seehofer said the shooting was anti-Semitic, adding: “According to the federal prosecutors’ office, there are enough indications that it was possibly a right-wing extremist motive.”

Despite comprehensive de-Nazification in the post-war era, fears of resurgent anti-Semitic hatred have never completely gone away, whether from fringe, far-right neo-Nazis or more recently from Muslim immigrants.

Occasional past attacks have ranged from the scrawling of Nazi swastikas on gravestones to firebombings at synagogues and even several murders. In recent years, cases of assault or verbal abuse, in some cases directed against people wearing traditional Jewish skullcaps, have raised an outcry.