The European Union said it is considering sanctions on Myanmar, and Indonesia is pushing Southeast Asian neighbours to agree on a plan that would keep the junta to its promise of holding elections. 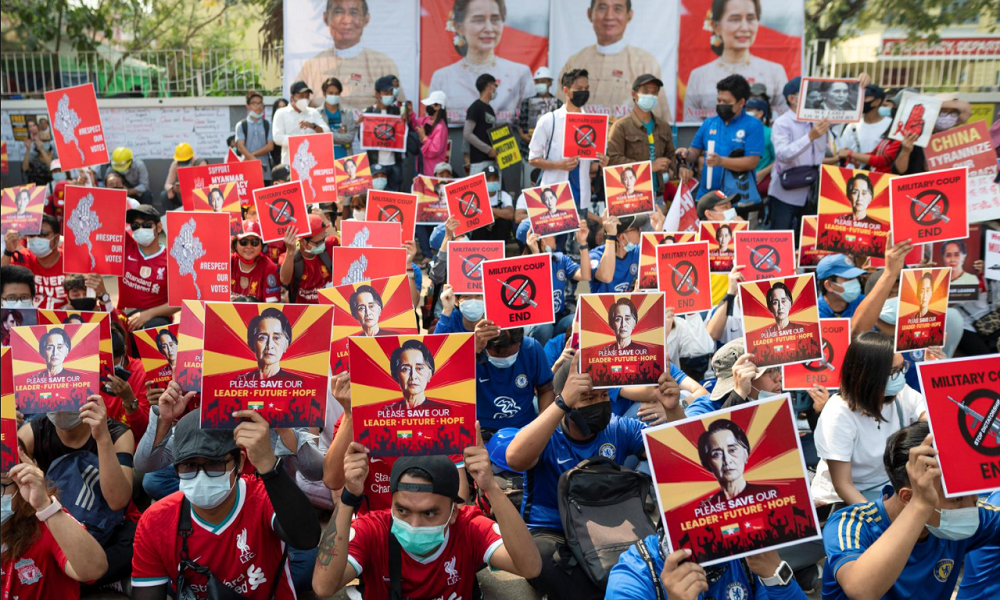 The European Union said it is considering sanctions on Myanmar while the United States penalised two more generals for links to the military coup, as Western countries sought to press the junta to avoid a violent crackdown after weeks of protests.

Junta leader General Min Aung Hlaing called for energy to be put into reviving the ailing economy, state media reported, a day after a general strike shut businesses and huge crowds gathered despite a warning from authorities that confrontation could get people killed.

UN special rapporteur Tom Andrews said millions had marched on Monday in a “breathtaking” turnout, despite the junta’s threat. “The generals are losing their power to intimidate and with it, their power. It is past time for them to stand down, as the people of Myanmar stand up,” Andrews said on Twitter.

Crowds gathered again on Tuesday though in much smaller numbers. There were no reports of confrontations with security forces.

Overnight, EU governments showed support for those seeking to reverse the February 1, 2021 coup and the release of elected leader Aung San Suu Kyi. “We are not prepared to stand by and watch,” German foreign minister Heiko Maas said in Brussels, adding that sanctions could follow if diplomacy failed. The European Union is considering sanctions that would target businesses owned by the army, but the bloc ruled out any curtailing of its trade preferences to avoid hurting poor workers.

The security forces have shown more restraint since the coup than in earlier confrontations with those pushing for democracy in almost half a century of direct military rule. Even so, three protesters have been killed – two shot dead in the second city of Mandalay on Saturday, and a woman who died on Friday after being shot more than a week earlier in the capital, Naypyitaw.

The army has said one policeman died of injuries sustained during the protests. It has accused protesters of provoking violence.

The army seized power after alleging fraud in the November 8, 2020 elections in which Suu Kyi’s party trounced a pro-military party, detaining her and much of the party leadership. The electoral commission dismissed the fraud complaints.

In Naypyitaw, where the military is headquartered, police detained dozens of protesters on Monday when they broke up a procession, a rights group said. Overall, 684 people had been arrested, charged or sentenced since the coup, the group said.

The United States on Monday imposed sanctions on two members of the junta – Lieutenant General Moe Myint Tun and General Maung Maung Kyaw – and warned it could take more action. The administration of President Joe Biden has previously imposed sanctions on the acting president of Myanmar and several military officers, as well as three companies in the jade and gems sector.

“The military must reverse its actions and urgently restore the democratically elected government,” the US treasury department’s Office of Foreign Assets Control said. Britain, Germany and Japan have also condemned the violence in Myanmar, and UN secretary-general Antonio Guterres urged the military to stop repression.

Myanmar has denounced interference in its affairs.

Coup leader Min Aung Hlaing, in a meeting of the ruling council, called for state spending and imports to be cut and exports increased to boost the economy.

Indonesia is pushing Southeast Asian neighbours to agree on a plan that would keep the junta to its promise of holding elections, with monitors to ensure they are fair and inclusive, three sources familiar with the proposal said. Indonesian foreign minister Retno Marsudi has been rallying support among Association of South East Asian Nations members for a special meeting on the crisis.

But the plan from the biggest regional nation would fall short of protester demands for the immediate release of Suu Kyi and recognition of the November election result. A protester put up a sign outside Indonesia’s embassy in Yangon saying: “We don’t need another election!! Respect our votes.”