Her likely ascent comes at a time of national fragility for Italy, which is wracked by economic woes, spiralling inflation and an immigration crisis. 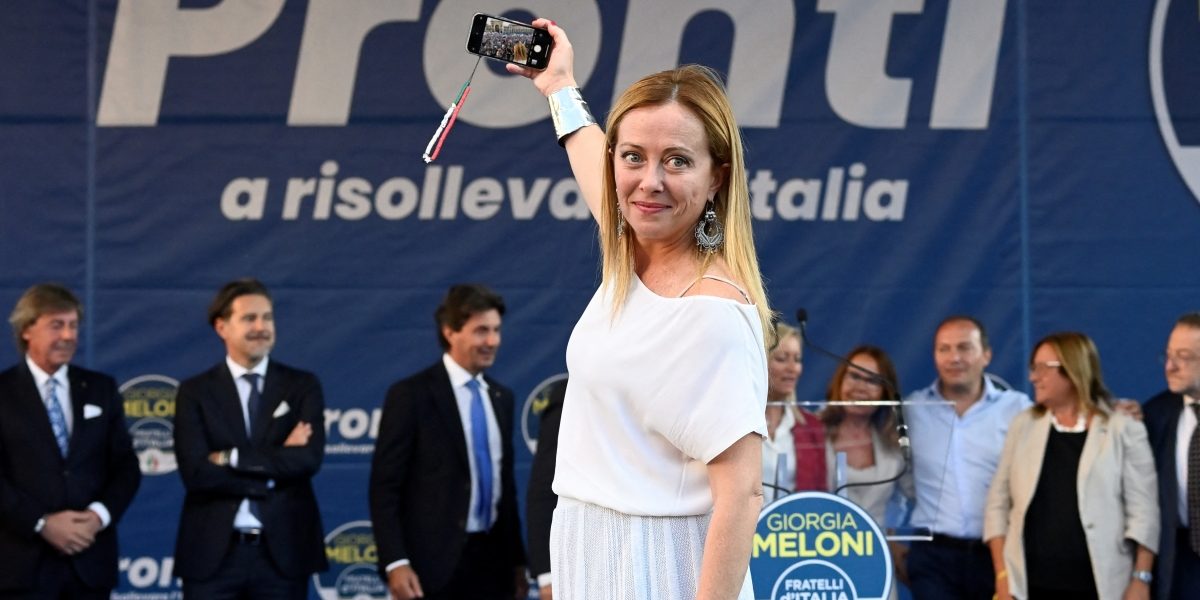 Giorgia Meloni, leader of the far-right Brothers of Italy party, takes a selfie during a rally in Duomo square ahead of the September 25 snap election, in Milan, Italy, September 11, 2022. Photo: Reuters/Flavio Lo Scalzo

In the autumn of 1922, Benito Mussolini, the ambitious and charismatic founder of the Fascist Party, became Italy’s youngest prime minister – seizing power in a march on Rome that ushered in a dark period of totalitarian rule.

A century on, Italy looks set to get its first far-right leader since Mussolini’s body was strung up for all to see at the end of World War II. On September 25, 2022, voters are widely expected to elect as prime minister Giorgia Meloni, the leader of Fratelli d’Italia, or Brothers of Italy – a party whose lineage traces back to the rump of Mussolini’s fascists.

Many Italians and Europeans are understandably worried. Her likely ascent comes at a time of national fragility for Italy, which is wracked by economic woes, spiralling inflation and an immigration crisis. It also poses uncomfortable questions over the idea of European identity and unity. Moreover, it is a symptom of the political malaise in Italy and of the winds that have seen populist right-wing leaders gain support around the world.

Who is Giorgia Meloni?

Meloni has been accused of being a political provocateur. A proud nationalist, her policy stances stress anti-immigration positions and the protection of Italy from “Islamisation.” In contrast, she presents herself as the defender of traditional family values, politicising Christianity and motherhood as the cornerstones of the authentic Italian national identity. In a 2019 speech, she explained: “I am Giorgia. I am a woman, I am a mother, I am Italian, I am a Christian” – a rhetorical flourish that went viral, even being turned into a disco remix.

But Meloni is also a political chameleon. She changes strategy when it is politically advantageous to do so. In her youth, she openly admired Mussolini and considered him a good politician. But asked in the run-up to the election if she agreed that the fascist leader was bad for Italy, she said “yes.”

Over the years, she has courted leaders deemed by many to be ultra-nationalist, such as Vladimir Putin of Russia, Viktor Orbán of Hungary and Marine Le Pen of France. Yet she has also tried to position herself as aligned with the conservatism of the British Conservative Party and the Republican Party in the US.

She has of late tried to distance herself from prior support for the strongmen of Russia and China and to reemphasise her willingness to patriotically serve her country. 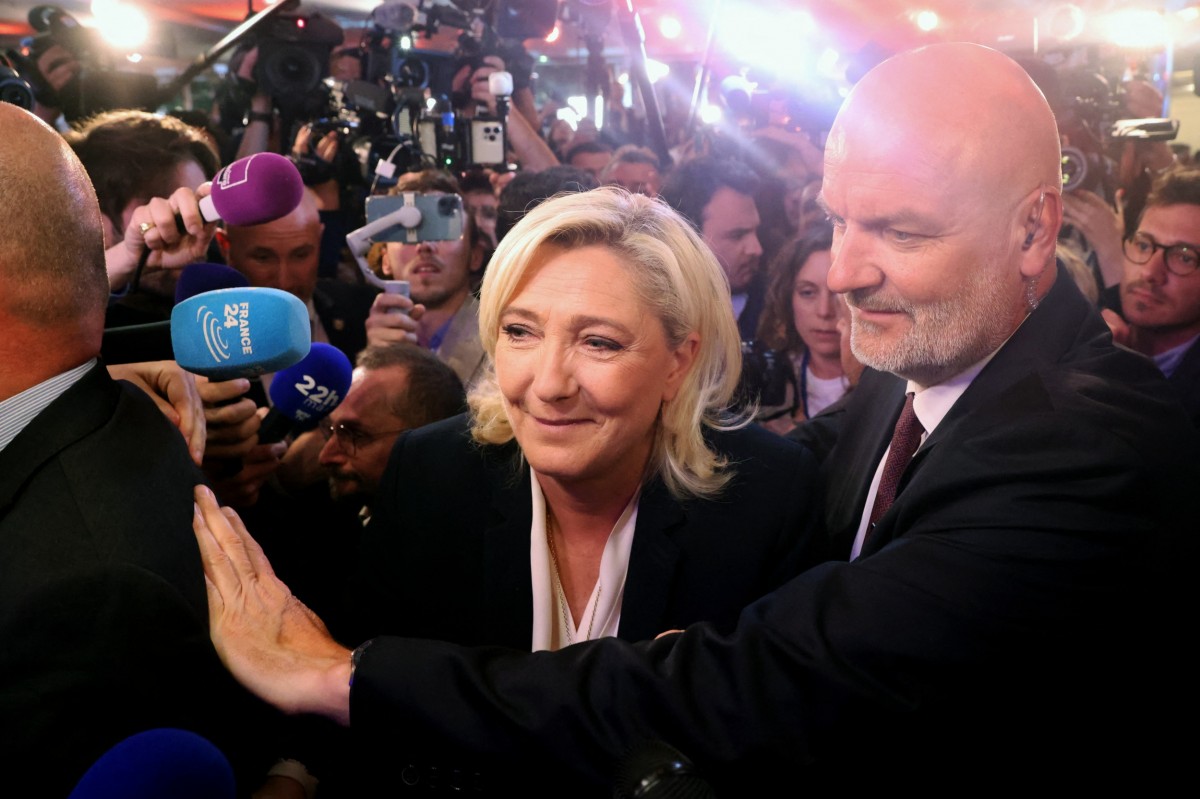 The ploy has seemingly worked.

The far-right alliance of Meloni’s Fratelli d’Italia and like-minded parties Lega and Forza Italia are on course to win an absolute majority in the Parliament. But it is Meloni’s party that has stood out, with polls showing it is set to win around a quarter of all votes.

It marks a remarkable rise to power for Fratelli d’Italia. In the course of the past four years, the party’s polling numbers have been steadily growing from a little over 4% in 2018 to over 25% in 2022. The trajectory suggests that the party has either shrugged off its historical links to fascism or that many Italians simply don’t care.

Fratelli d’Italia is a descendant of the Italian Social Movement party, formed by Mussolini supporters after World War II. Meloni has tried to put distance between the lineage, declaring that the Italian right considers fascism to be confined to Italy’s history.

Meloni has also exploited national sentiments of insecurity and anxiety, caused by the multiple crises the country has faced in the last couple of years. These include the COVID-19 pandemic that hit Italy particularly hard and the still-unresolved major humanitarian crises caused by mass migration across the Mediterranean, with Italy being the main receiving country of migrants heading to Europe. Italy is also facing rising inflation and an ongoing energy crisis, driven by Russia’s war in Ukraine and Putin’s strategy of weaponizing Russia’s gas supply to the European Union.

Faced with these crises, Meloni has positioned herself as the person to “rescue” Italy. History has proved that in times of precarity, charismatic ultra-nationalist leaders tend to do well.

With a familiar formula of putting Italy “first,” Meloni’s euroskepticism, xenophobia and Islamophobia – repackaged as patriotism – have gained popularity among Italians.

Out of the chaos of coalition collapse

But the success of Fratelli d’Italia is not all about Meloni. The flip side of her success is the failure of other parties and the chaos of a government collapse that affected many of the parties running against her.

The snap election in Italy followed the resignation of Prime Minister Mario Draghi, an internationally admired economist nicknamed “Super Mario” for his impressive handling of the eurozone crisis as the head of the European Central Bank.

Draghi presided over a wide coalition but was forced to resign in July 2022, amid a worsening economic and political crisis that saw some coalition partners turn against the prime minister.

Italy has often struggled with its political leadership. The country’s political system all but ensures government by coalition. But that often means rule by a group of parties, whose agendas and visions may be drastically different – sometimes almost mutually exclusive. And the collapse of Draghi’s wide coalition has tainted many parties across the political spectrum, including the once-popular 5-Star Movement.

On top of this, there have been individual failures of the parties challenging Meloni in the election. This has included cases of corruption, with the former leader of the Democratic Party – and later the centrist Italia Viva – Matteo Renzi being charged with illegal party financing.

Meanwhile, failed attempts to forge a successful centre-left coalition to challenge the right-wing bloc have failed, with an alliance falling apart just days after being formed. 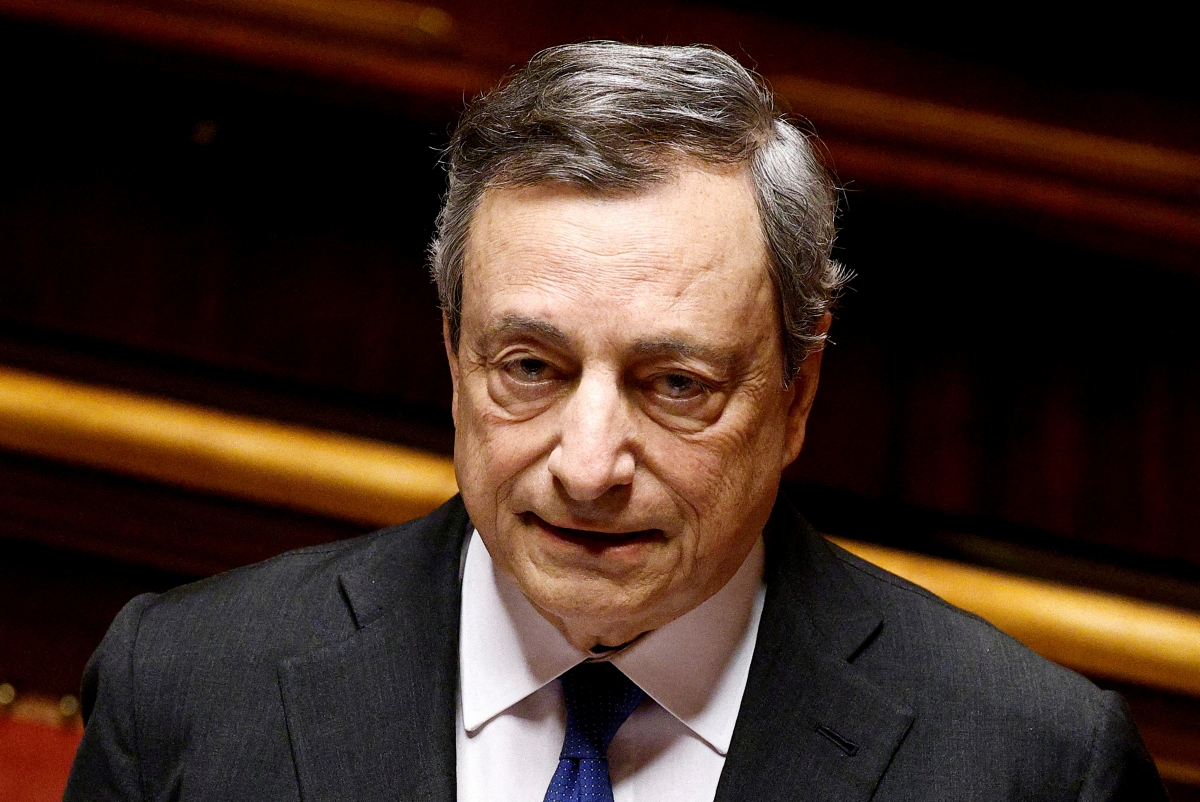 Italian Prime Minister Mario Draghi addresses the Senate ahead of a confidence vote for the government after he tendered his resignation last week in the wake of a mutiny by a coalition partner, in Rome, Italy July 20, 2022. Photo: Reuters/Guglielmo Mangiapane

The political parties gaining from this political mess have largely been on the right. In alliance with Meloni’s Fratelli d’Italia are the euroskeptic, anti-immigrant Lega and Forza Italia – the party of 85-year-old former Prime Minister Silvio Berlusconi.

But while Forza Italia and Lega had been part of Draghi’s coalition, Meloni has been able to run on a campaign that is unblemished by association to that failed government.

Meloni is also symptomatic of an emerging European political climate that has seen growth in support for hard-right politicians such as Marine Le Pen in France and Hungary’s Viktor Orbán.

Meloni has run under a campaign slogan of “Pronta a governare” or “Ready to govern!”

The big question now is whether Italy is ready for Meloni as prime minister.