The SPD's recovery marks a tentative revival for centre-left parties in parts of Europe, following the election of Democrat Joe Biden as US president in 2020. 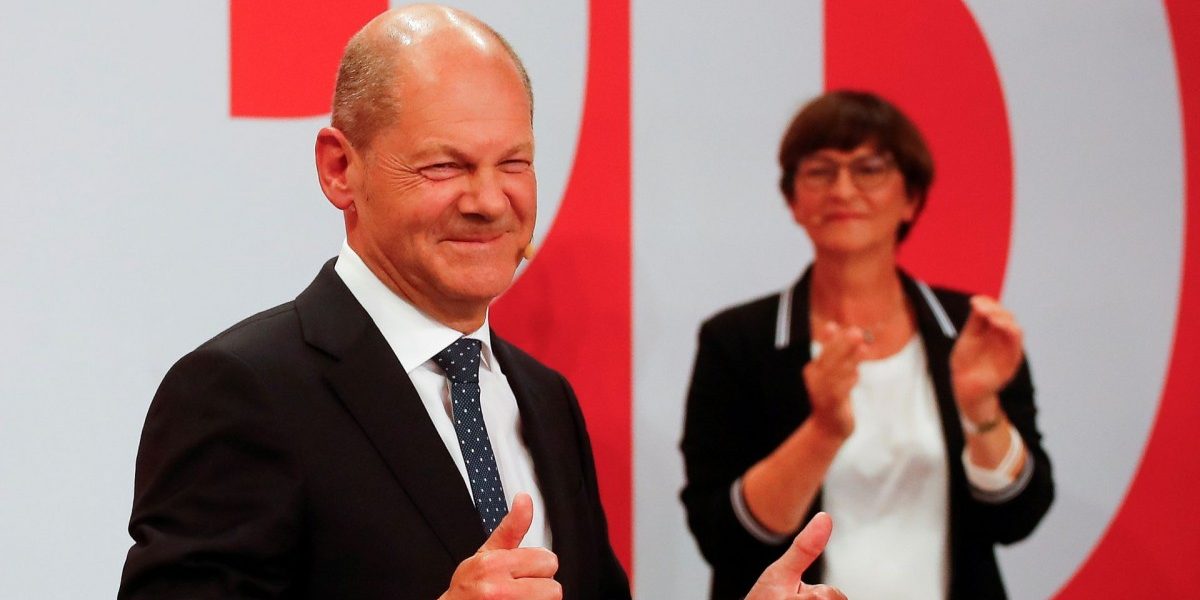 Berlin: Germany’s Social Democrats were set on Monday to start the process of trying to form a government after they narrowly won their first national election since 2005 to end 16 years of conservative rule under Angela Merkel.

The centre-left (SPD) Social Democrats  won 25.7% of the vote, ahead of 24.1% for Merkel’s CDU/CSU (  Christian Democratic Union of Germany and the Christian Social Union in Bavaria) conservative bloc, according to provisional results. The Greens came in at 14.8% and the liberal Free Democrats (FDP) were on 11.5%.

The SPD’s recovery marks a tentative revival for centre-left parties in parts of Europe, following the election of Democrat Joe Biden as US president in 2020. Norway’s centre-left opposition party also won an election earlier this month.

The Social Democrats’ chancellor candidate, Olaf Scholz said he hoped to strike a coalition deal before Christmas, although his conservative rival Armin Laschet said he could still try to form a government despite coming in second.

Merkel will stay in charge in a caretaker role during the coalition negotiations that will set the future course of Europe’s largest economy.

On Monday, the parties will start sounding each other out about possible alliances in informal discussions.

In order to secure a majority in parliament, the SPD is likely to seek an alliance with the Greens and the FDP, although the two parties could also team up with the conservatives.

“The SPD is in first place. We won the election,” Lars Klingbeil, the SPD general secretary, told ARD television, adding that the party would fight to make sure Scholz becomes the next chancellor.

The SPD will talk to the Greens and the FDP about forming the next government, he said, adding that party leadership was set to meet on Monday to discuss the next steps.

If Scholz, 63, succeeds in forming a coalition, he would become the fourth post-war SPD chancellor after Willy Brandt, Helmut Schmidt and Gerhard Schroeder. Finance minister in Merkel’s cabinet, he is a former mayor of Hamburg.

But Laschet, 60, is still hung on to the possibility that he could be chancellor, even though he led the conservatives to their worst ever election result.

Merkel has stood large on the European stage almost since taking office in 2005 – when George W. Bush was U.S. president, Jacques Chirac in the Elysee Palace in Paris and Tony Blair was the British prime minister.

But Berlin’s allies in Europe and beyond will probably have to wait for months before they can see how the new German government will engage on foreign issues.

Assuming the SPD agree a deal with the Greens and the FDP, the Greens could provide the foreign minister, as they did with Joschka Fischer in their previous two-way alliance with the SPD, while the FDP is seeking the finance ministry.

A row between Washington and Paris over a deal for Australia to buy US instead of French submarines has put Germany in an awkward spot between the allies, but also gives Berlin the chance to help heal relations and rethink about their common stance on China.

On hearing that the SPD was slightly ahead in polls, US President Joe Biden told reporters in Washington: “I’ll be darned… They’re solid.”

On economic policy, French President Emmanuel Macron is eager to forge a common European fiscal policy, which the Greens support but the CDU/CSU and FDP reject. The Greens also want “a massive expansion offensive for renewables”.

One thing is certain: The future government will not include the far-right Alternative for Germany (AfD) which scored 10.3%, a fall from four years ago when they stormed into the national parliament with 12.6% of the vote. All mainstream politicians have ruled out a coalition with the party.