German Chancellor Angela Merkel's conservatives took a one point lead over the Social Democrats (SPD) in the latest poll conducted by Emnid for the German newspaper Bild am Sonntag, with nearly seven months to go before federal elections. 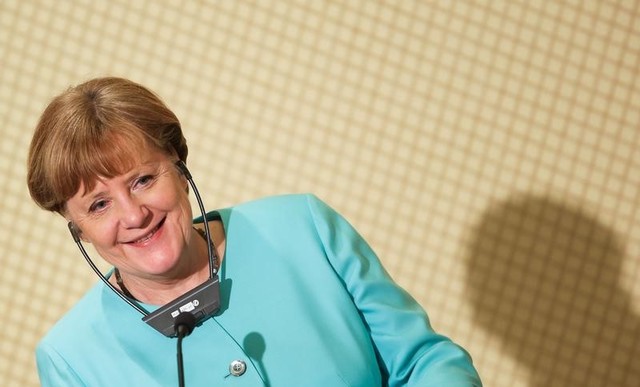 Berlin: German Chancellor Angela Merkel’s conservatives took a one point lead over the Social Democrats (SPD) in the latest poll conducted by Emnid for the German newspaper Bild am Sonntag, with nearly seven months to go before federal elections.

The Christian Democratic Union (CDU) and its CSU Bavarian sister party gained one percentage point to reach 33% support, compared with an unchanged 32% for the SPD in a poll of 1,403 people taken from February 23 to March 1.

The anti-immigrant Alternative for Germany (AfD) party gained one percentage point in the poll to reach 10%, while the ratings for the Left party and pro-environment Green party were unchanged at 8% and 7%, respectively.

The Free Democratic Party lost one percentage point compared to the last poll to reach 6%, just above the 5% threshold needed to take seats in parliament.

The increase for Merkel’s conservatives came after a surge in support for the SPD that followed its nomination of former European Parliament President Martin Schulz as its candidate to challenge Merkel in the September 24 national election.

Merkel, who is seeking a fourth term in the election, leads a coalition government made up of the CDU/CSU and the centre-left SPD, but Schulz is hoping to win enough votes to form a new government with smaller allies.

The unexpectedly strong gains shown by the SPD – and the CDU/CSU’s slide – have prompted some German media to write about “Merkel fatigue” and what they see as the chancellor’s lack of enthusiasm for this year’s campaign.

“Angela Merkel suddenly seems like one of those dinosaurs that was incapable of adapting in time, and could only hang around limply waiting for its own extinction,” wrote Jakob Augstein, a columnist for Der Spiegel magazine, in Sunday’s edition.

But the new Emnid poll and others taken over the past week showed Merkel’s conservatives have now stabilised and are now polling neck-and-neck or just ahead of the Social Democrats.