The attacker, an 18-year-old, was shot dead by police. 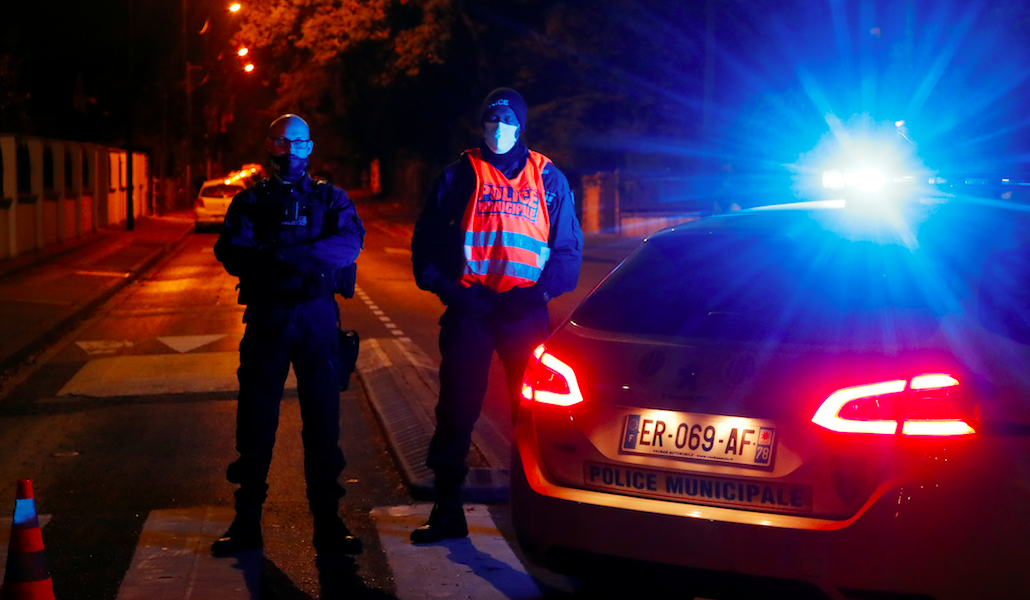 Police officers secure the area near the scene of a stabbing attack in the Paris suburb of Conflans St Honorine, France, October 16, 2020. Photo: Reuters/Charles Platiau

Paris: A middle school history teacher in France was beheaded near the school where earlier this month he had shown his pupils cartoons of the Prophet Mohammad, considered blasphemous by Muslims on Friday.

Samuel Paty was described by his pupils and their parents as caring and professional. But he was killed after becoming the target of an angry campaign on social media.

Paty, 47, was killed on Friday by an 18-year-old man of Chechen origin. Prosecutors said the attacker, shot dead by police soon after, wanted to punish the teacher for showing his pupils cartoons of the Prophet Mohammad in a civics class on freedom of expression earlier this month.

The teenager had asked students to point out his victim, anti-terrorism prosecutor Jean-Francois Ricard said on Saturday.

“One of our fellow citizens was assassinated today because he was teaching, he was teaching pupils about freedom of expression,” French President Emmanuel Macron told reporters at the scene of the attack.

“Our compatriot was flagrantly attacked, was the victim of an Islamist terrorist attack,” Macron said. “They won’t win… We will act. Firmly, And quickly. You can count on my determination.”

The incident carried echoes of the attack five years ago on the offices of satirical magazine Charlie Hebdo. It published caricatures of the Prophet Mohammed, unleashing divisions that are still casting a pall over French society.

Friday’s killing, by targeting a teacher, was interpreted by many public figures as an attack on the essence of French statehood, with the values it espouses of secularism, freedom of worship, and freedom of expression. 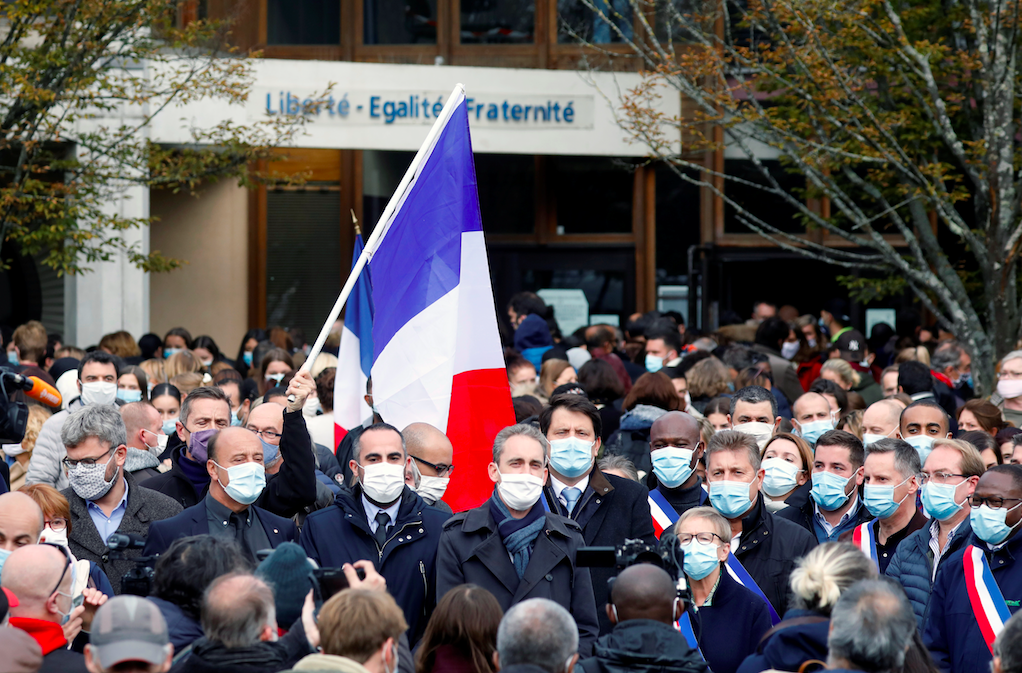 People gather in front of the Bois d’Aulne college after the attack in the Paris suburb of Conflans St Honorine, France, October 17, 2020. Photo: Reuters/Charles Platiau

“This evening, it’s the Republic that’s under attack,” Education Minister Jean-Michel Blanquer wrote in a tweet.

The victim of Friday’s attack sustained multiple knife wounds to the neck, according to a police representative. One law enforcement source said the teacher had been beheaded in the attack.

French broadcaster BFMTV reported that the suspected attacker was 18 years old and born in Moscow. Law enforcement officials did not name the attacker, or his victim.

A police source said that witnesses had heard the attacker shout “Allahu Akbar”, or “God is Greatest”.

The attack took place in the street in front of the middle school where the victim worked, in the suburb of Conflans Sainte-Honorine. The area is a middle class neighbourhood with many residents who commute to work in Paris.

According to French media reports, the teacher who was killed had earlier this month shown pupils the cartoons as part of a civics lesson.

A Twitter thread posted on October 9 contained a video of a man who said his daughter, a Muslim, was one of the pupils in the class, and that she was shocked and upset by the teacher’s actions.

The man in the video urged Twitter users to complain to the authorities and get the teacher removed from his post. Reuters was unable to independently verify the authenticity of the video.

France has over the past years seen a series of violent attacks by Islamist militants, including the 2015 Charlie Hebdo killings, and bombings and shootings in November 2015 at the Bataclan theatre and sites around Paris that killed 130 people.

Less than a month ago, a man originally from Pakistan used a meat cleaver to attack and wound two people who were on a cigarette break outside the offices where Charlie Hebdo was based at the time of the 2015 attack.

The issue of the cartoons had been revived last month when Charlie Hebdo decided to re-publish them to coincide with the start of the trial of accomplices in the 2015 attack.

Al-Qaeda, the militant Islamist group that claimed responsibility for those killings, threatened to attack Charlie Hebdo again after it republished the cartoons.

The magazine said last month it published to assert its right to freedom of expression, and to show it would not be cowed into silence by violent attacks. That stance was backed by many prominent French politicians and public figures.

Reacting to Friday’s attack outside the school, Charlie Hebdo wrote on its Twitter account: “Intolerance has crossed a new threshold and does not seem to give ground to anything in imposing its terror on our country.”