For Notre Dame's Restoration, Lessons to be Learnt From a New York Cathedral

Architects and engineers who spent over five years repairing the Episcopal Cathedral of St. John the Divine in New York, say that Notre Dame's rebuilding is unlikely to be quick. 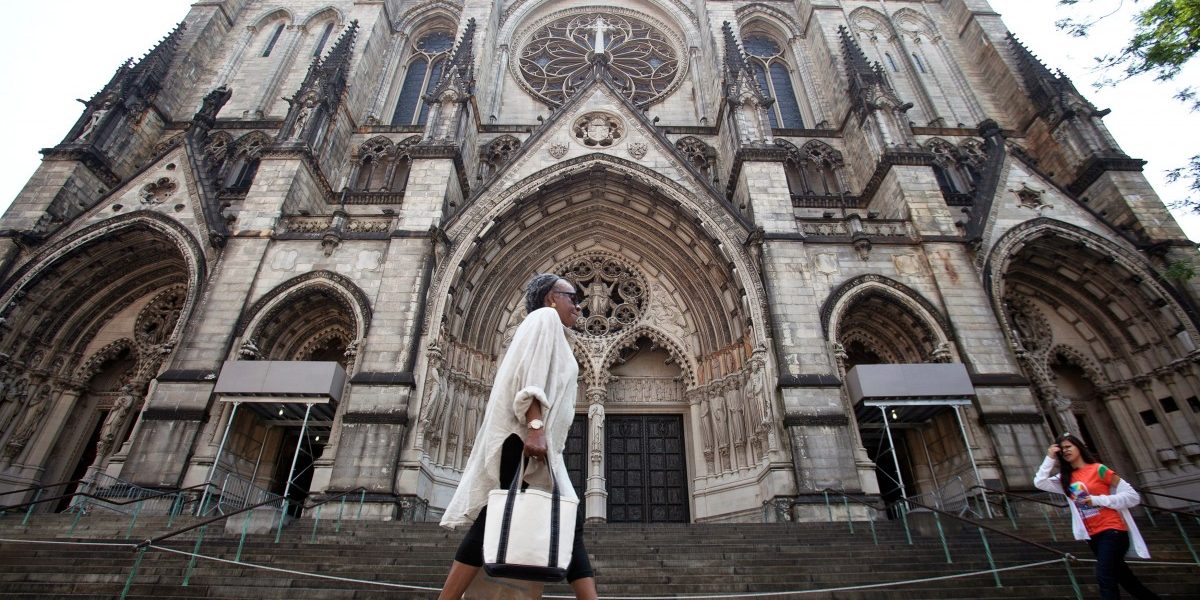 New York: Before the restoration of Notre–Dame de Paris can begin, engineers may have to tap nearly every stone in the cathedral and listen for subtle sounds of damage, according to specialists who repaired one of the largest cathedrals in the world in New York after a devastating 2001 fire.

The rebuilding is unlikely to be quick, warned architects and engineers who spent over five years repairing the Episcopal Cathedral of St. John the Divine after its fire. French President Emmanuel Macron’s vow to restore the Paris landmark within five years after a fire consumed Notre–Dame‘s roof and toppled its spire on Monday may prove unrealistic, they said.

“Everything is done in ‘cathedral time'”, said James Patterson, director of facilities and capital projects at St. John’s on Manhattan’s Upper West Side near Columbia University. “Cathedral clocks move much slower than everybody else’s clocks.”

Patterson, along with other specialists who worked on the St. John’s restoration, described the challenges and satisfactions that may lie ahead in Paris where $1 billion has been pledged to restore the 850-year-old landmark.

The fire at St. John’s destroyed much of the unfinished north transept of the 19th-century Gothic Revival structure, silenced its grand organ and left what remained blackened with thick, tarry deposits. 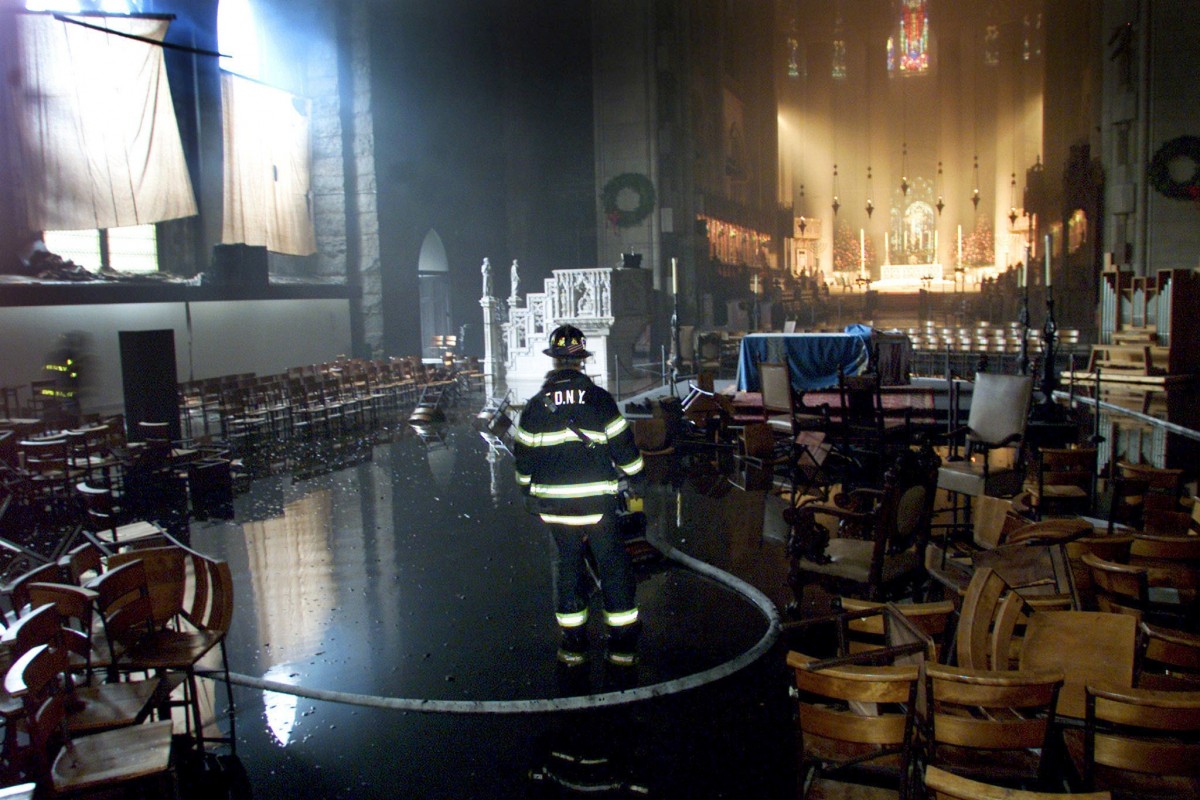 Patterson and others recalled the joy of discovering sculptors, stonemasons, stained-glass specialists and others around the world who can rival the artisans of earlier centuries in their decorative work. There were less obvious considerations to contend with, too, such as how to ensure the majesty of the nave’s acoustics were not dampened by repairs to the walls and ceiling.

“The organ masters are very sensitive to it,” said Raymond Pepi, the lead building conservationist on the project.

But before all that, the specialists had to inspect, repair and clean the fire-blasted stones. 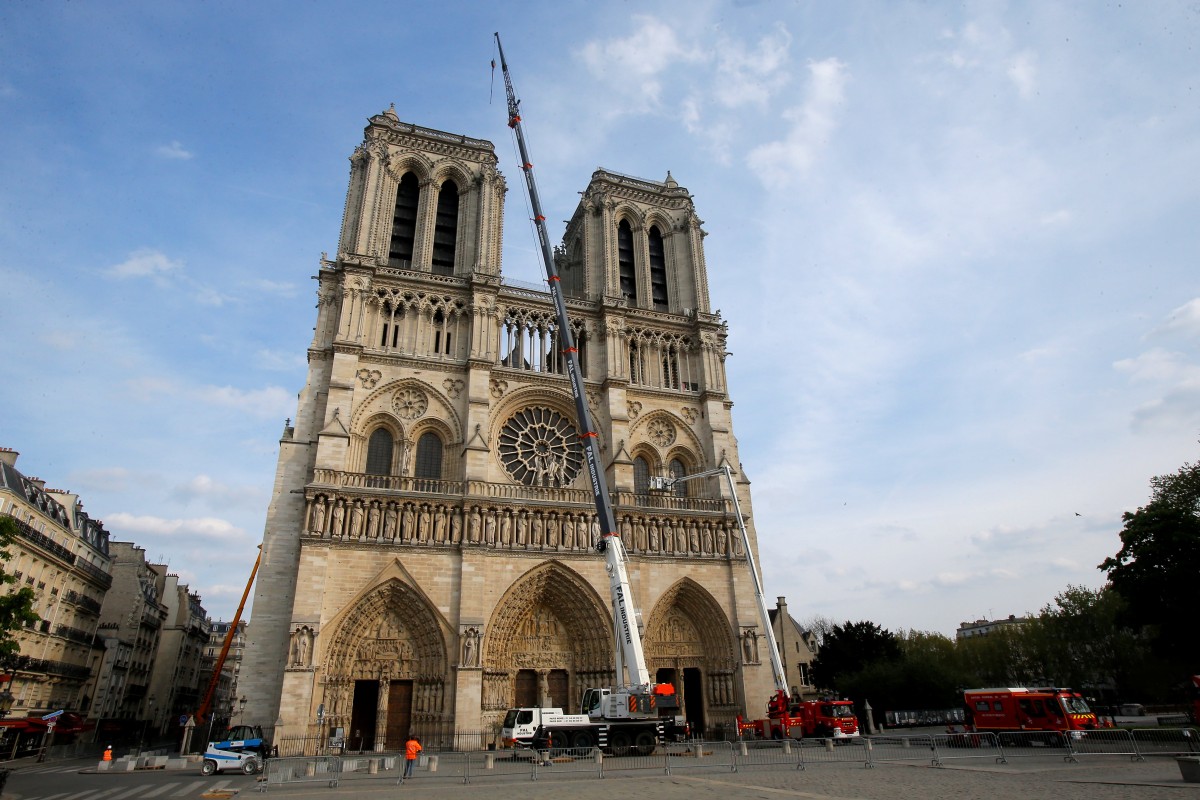 As with Notre–Dame, much of St. John’s masonry is limestone. If rapidly heated by a fire and then rapidly cooled by water, limestone can crack, weakening the structure’s stability, and its surfaces can powder and flake.

To check which blocks needed to be patched up or replaced outright, Nat Oppenheimer, the structural engineer on the St. John project, and his colleagues “sounded” thousands of limestone blocks throughout the cathedral over a period of months.

Though more modern technology and techniques were used in aspects of the restoration, Oppenheimer said the old-fashioned approach of tapping stones with a small hammer or dragging a chain across them, listening for tell-tale sounds of hollowness, had not been supplanted.

Some cracks can be strengthened with plastic or steel pins. The St. John’s team also mixed up centuries-old mortar recipes to fill in damaged joints. Where a stone’s surface is flaking or “sugary”,it can be mechanically tooled away, although that comes with drawbacks.

“If one stone is slightly recessed from another stone, that throws a shadow on the stone,” said Pepi, the president of Building Conservation Associates, which helped oversee the St. John project. “It’s not aesthetically satisfying or pleasing.”

Notre–Dame‘s fire appears to have been mainly fueled by centuries-old oak timbers that made up its roof. That will have left deposits of wood fibres and resins clinging to stones throughout the cathedral, and trial and error may be needed to determine the best way to clean them, Pepi said.

At St. John’s, Pepi and his team conducted “literally hundreds” of tests, which took about a year. 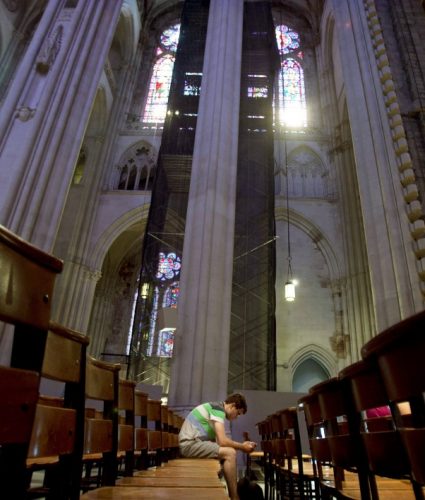 FILE PHOTO: A man sits in the pews of Cathedral of St. John the Divine in New York, June 25, 2013. Credit: Reuters/Carlo Allegri/File Photo

In the end, they settled on spraying the tarry stones with liquid latex rubber. After the rubber dried, it could be peeled away, bringing the deposits with it, leaving clean stone behind.

With the restoration funded in part by an insurance settlement of $42 million, the full length of the cathedral was reopened to the public in 2008, Patterson said, although building work on what is sometimes nicknamed “St. John the Unfinished” continues to this day.

The renovation of Notre–Dame will also be an opportunity to consider modern upgrades.

As with Notre–Dame, St. Patrick’s roof has wooden scaffolding, and Pepi recalls the city’s Fire Department all but insisted that a modern fire-prevention system be installed.

“The Fire Department told us: ‘We’re not going up there if there’s a fire,'” Pepi said.

They settled on a modern misting system that would quell a fire in the rafters, but would minimize water damage that sprinklers might cause in plaster vaulting below.