Trump bulldozed his way through the 90-minute debate, trying to goad Biden, claiming that Democrats were trying to steal the November presidential election and declining to condemn white supremacist groups when asked to do so. Trump bulldozed his way through the 90-minute debate, trying to goad Biden, claiming that Democrats were trying to steal the November presidential election and declining to condemn white supremacist groups when asked to do so.

Moderator Chris Wallace never established control of the debate, with Trump repeatedly ignoring his calls to let Biden speak. The two White House contenders talked over each other and lobbed insults in a breathtaking political brawl that made it hard for either to make a point.

It was the first of three scheduled debates.

As of Tuesday evening, 1.4 million Americans already had cast early ballots. With time running out to change minds or influence the small sliver of undecided voters, the stakes were enormous as the two White House candidates took the stage five weeks before the November 3 election day.

For Trump, 74, Tuesday’s debate represented one of the few remaining chances to change the trajectory of a race that most opinion polls show him losing, as the majority of Americans disapprove of his handling of both the coronavirus pandemic and protests over racial injustice.

Biden, 77, has held a consistent lead over Trump in national opinion polls, although surveys in the battleground states that will decide the election show a closer contest. It was hard to determine whether the debate would move the needle.

Here are some of the quotes making news at the first US 2020 presidential debate between Republican President Donald Trump and Democratic challenger Joe Biden ahead of the November 3 election:

Trump, asked by moderator Chris Wallace about whether US appeals court judge Amy Coney Barrett should be nominated to the Supreme Court before the election: “We won the (2016) election. Elections have consequences.

“… I think that she (Barrett) will be outstanding. She will be as good as anybody who has ever served on that court. We won the election and therefore we had the right to choose her.”

Trump: “As far as a say is concerned, the American people have already had their say. … I’m not elected for (just) 3-1/2 years.”

Responded Biden: “He’s elected until the next election. … The election’s already started.”

Biden, told by Trump he had adopted former Democratic presidential rival Bernie Sanders’ “socialized medicine” proposals, said of the president: “Everybody here knows he’s a liar. … You picked the wrong guy on the wrong night at the wrong time.”

“… Folks, do you have any idea what this clown’s doing? I tell you what, he is not for anybody needing healthcare.”

After Trump explained his healthcare proposal, Biden said: “He has no plan for healthcare. … The fact is this man has no idea what he’s talking about.”

Dealing with the coronavirus pandemic

Biden to Trump: “You should get out of your bunker and get out of the sand trap and … the golf course and go in the Oval Office and (put) together Democrats and Republicans, and fund what needs to be done now to save lives.”

Trump to Biden: “You didn’t think we should’ve closed our country (to China) because you thought it was terrible.”

“… We’ve done a great job. But I tell you, Joe, you could never have done the job we’ve done. You don’t have it in your blood.”

Biden on Trump‘s leadership on the pandemic: “He panicked or he looked at the stock market. … A lot of people died, and a lot more (are) going to die unless he gets a lot smarter a lot quicker.”

Responded Trump: “There’s nothing smart about you, Joe.”

Biden on Trump: “This is a president who has used everything as a dog whistle to try to generate racist hatred, racist division.”

Trump to Biden, citing the then-senator’s support for the 1994 crime bill: “You’ve treated the Black community about as bad as anybody in this country.”

Biden: “Yes, there’s a systemic injustice in this country in education and work and in law enforcement, and the way in which it is enforced.” 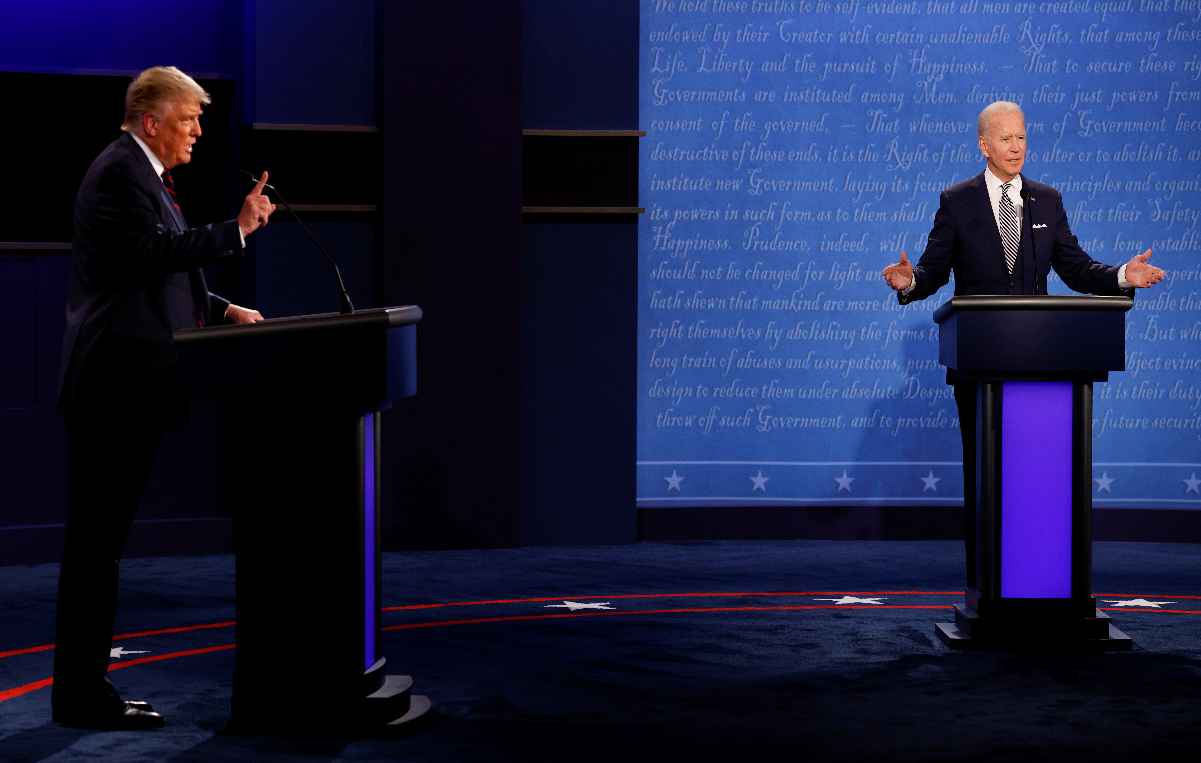 Trump: “The top 10 cities and just about the top 40 cities are run by Democrats in many cases, radical left, and they’ve got you wrapped around their finger, Joe, to a point where you don’t want to say anything about law and order. And I’ll tell you what the people of this country want and demand law and order, and you’re afraid to even say it.”

Biden said Trump had done nothing to calm the protests. “He just pours gasoline on the fire.”

Responding to Trump attacking him on the suburbs, Biden said: “He wouldn’t know a suburb unless he took a wrong turn. I know suburbs.”

Wallace: “Are you willing tonight to condemn white supremacists and militia groups and to say that they need to stand down and not add to the violence or the number of these cities as we saw in Kenosha, and as we’ve seen in Portland?”

Trump: “I would say almost everything I see is from the left wing, not from the right. … I’m willing to do anything. I want to see peace.”

Trump: “Proud Boys, stand back and stand by.”

Climate change and the environment

Trump: “I believe that we have to do everything we can to have immaculate air, immaculate water, and do whatever else we can that’s good.”

Biden: “The first thing I will do, I will rejoin the Paris Climate Accord.”

Biden encouraged mail-in voting by saying Trump does it, too. “He sits behind the Resolute Desk (in the White House) and sends his ballot to Florida.”

Trump: “Don’t tell me about a free transition. This is going to be a fraud like you’ve never seen. This is not going to end well.”

Asked by Wallace if he would urge his supporters to stay calm and pledge not to declare victory until the election is certified, Trump said: “I’m urging my supporters to go into the polls and watch very carefully.”

Trump: “If I see tens of thousands of ballots being manipulated, I can’t go along with it. They cheat.”

Biden: “The fact is I will accept it and he will too. You know why? Because once the winner is declared after all the ballots are counted, all the votes are counted. That’ll be the end of it.”

At one point when Trump was interrupting him, Biden said: “Will you shut up, man? This is so unpresidential.

Wallace to Trump: “I think the country would be better served if we allowed both people to speak with fewer interruptions. I’m appealing to you, sir, to do that.”

Trump, referring to Biden, responded: “And him, too.”