Russia denies plans to attack Ukraine but says it could take unspecified military action unless demands are met, including a promise by the NATO alliance never to admit Kyiv. 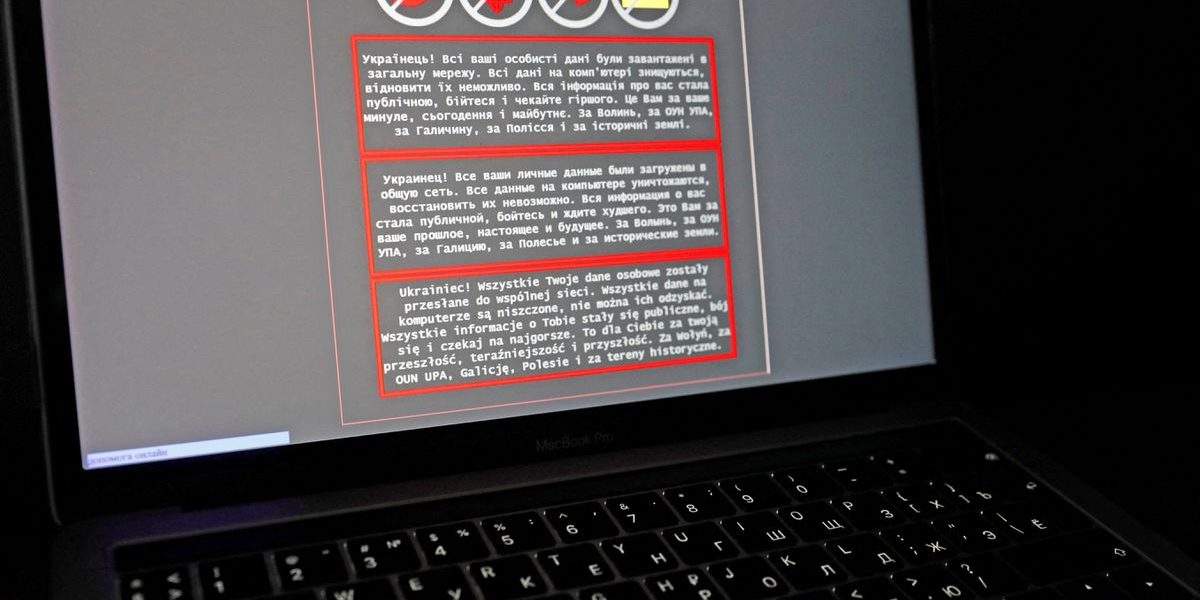 A laptop screen displays a warning message in Ukrainian, Russian and Polish, that appeared on the official website of the Ukrainian Foreign Ministry after a massive cyberattack, in this illustration taken January 14, 2022. REUTERS/Valentyn Ogirenko/Illustration

Kyiv/Moscow: Ukraine was hit by a massive cyberattack on Friday warning its citizens to “expect the worst”, and Russia, which has massed more than 100,000 troops on its neighbour’s frontier, released television pictures of more forces deploying in a drill.

The developments came after no breakthrough was reached at meetings between Russia and Western states, which fear Moscow could launch a new attack on a country it invaded in 2014.

“The drumbeat of war is sounding loud,” said a senior US diplomat.

Russia denies plans to attack Ukraine but says it could take unspecified military action unless demands are met, including a promise by the NATO alliance never to admit Kyiv.

Russia said troops in its far east would practice deploying to far-away military sites for exercises as part of an inspection. Defence ministry footage released by RIA news agency showed numerous armoured vehicles and other military hardware being loaded onto trains in the Eastern Military District.

“This is likely cover for the units being moved towards Ukraine,” said Rob Lee, a military analyst and a fellow at the US-based Foreign Policy Research Institute.

The movements indicated Russia has no intention of dialing down tensions over Ukraine, having used its troop build-up to force the West to the negotiating table and press sweeping demands for “security guarantees” – key elements of which have been described by the United States as non-starters.

Ukrainian authorities were investigating a huge cyberattack, which hit government bodies including the ministry of foreign affairs, cabinet of ministers, and security and defence council.

“Ukrainian! All your personal data was uploaded to the public network. All data on the computer is destroyed, it is impossible to restore it,” said a message visible on hacked government websites, written in Ukrainian, Russian and Polish.

“All information about you has become public, be afraid and expect the worst. This is for your past, present and future.”

Ukraine’s foreign ministry spokesperson told Reuters it was too early to say who could be behind the attack but said Russia had been behind similar strikes in the past.

Russia did not immediately comment but has previously denied being behind cyber attacks on Ukraine.

The European Union’s top diplomat condemned the attack and said the EU’s political and security committee and cyber units would meet to see how to respond and help Kyiv.

“We are going to mobilise all our resources to help Ukraine to tackle this cyber attack. Sadly, we knew it could happen,” Josep Borrell told reporters at an EU foreign ministers meeting in the western French city of Brest.

“It’s difficult to say (who is behind it). I can’t blame anybody as I have no proof, but we can imagine.”

The United States warned on Thursday that the threat of a Russian military invasion was high. Russia has consistently denied that.

Moscow said dialogue was continuing but was hitting a dead end as it tried to persuade the West to bar Ukraine from joining NATO and roll back decades of alliance expansion in Europe.

The United States and NATO have rejected those demands but said they are willing to talk about arms control, missile deployments, confidence-building measures and limits on military exercises.

Russian foreign minister Sergei Lavrov said on Friday that Moscow was awaiting a point-by-point written response to its proposals.