Southern and western Germany and Belgium were also braced for potentially record-breaking temperatures as the heatwave, which scientists attribute to climate change, edged north and east. 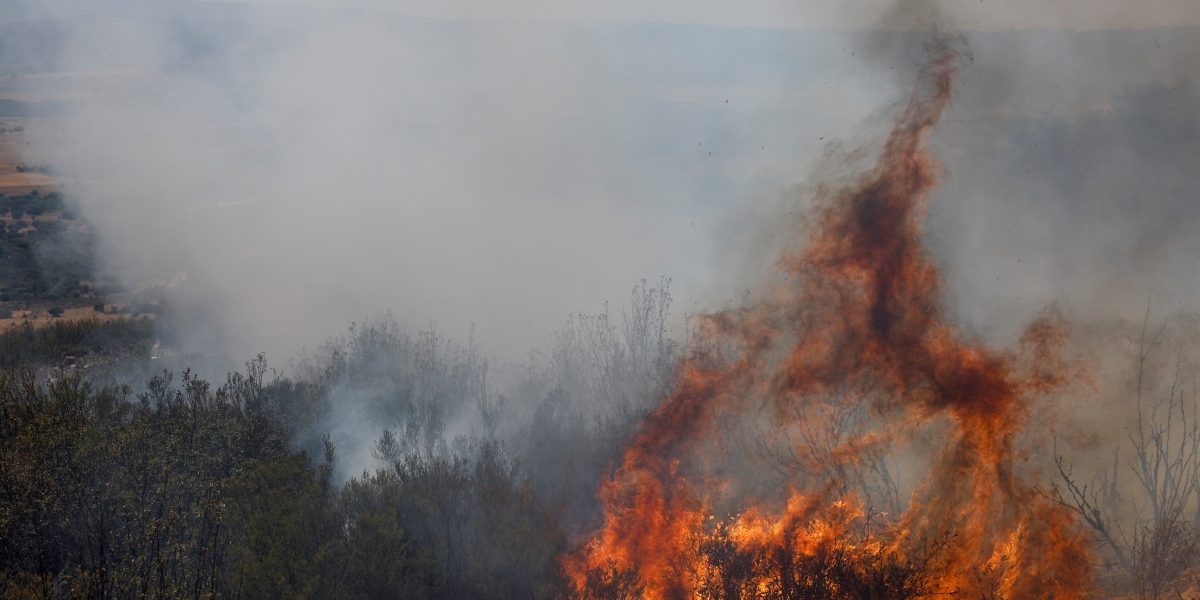 Southern and western Germany and Belgium were also braced for potentially record-breaking temperatures as the heatwave, which scientists attribute to climate change, edged north and east.

A wildfire fuelled by strong winds raged on a mountainous area near homes on the outskirts of the Greek capital, prompting authorities to order the evacuation of at least one area.

Numerous wildfires were reported in Italy. One of the biggest blazes broke out on Monday night in the hills of Massarosa in Tuscany, and was still raging on Tuesday afternoon.

“Fire continues to devour the woods in a frightening way due to the wind,” the governor of Tuscany, Eugenio Giani, said. He said 365 hectares (900 acres) of land had been destroyed.

Fires were also reported in woods near Rome, as well as on the shores of Lake Orta north of Milan and near the northeastern city of Trieste, forcing the authorities to close a motorway and railway line, with temperatures set to stay high.

A temperature of more than 40C (104F) was provisionally recorded for the first time in Britain, the Met Office said.

Authorities have put Britain, which often struggles to maintain key transport services when hit by unexpected weather such as heavy snow or high winds, on a state of “national emergency” over the unprecedented temperatures.

To the east of the capital, a large fire engulfed homes in the village of Wennington, with flames tearing across neighbouring fields and approaching a historic church. Elsewhere large grass areas around the capital were on fire. In southwestern France, the wine-growing Gironde region saw its biggest wildfires in over 30 years and authorities said a man had been detained on suspicion of arson.

The fires have spread across 19,300 hectares (about 75 sq miles) in the countryside surrounding Bordeaux since July 12, forcing a total of 34,000 people to evacuate their homes.

About 2,000 firefighters, supported by eight water-bomber aircraft, were battling the blazes.

“Despite attacks from the ground and from the air, the situation has still not stabilised,” the state prefecture said, adding there had been no reports of death or injury.

With human-caused climate change triggering droughts, the number of extreme wildfires is expected to increase 30% within the next 28 years, according to a February 2022 UN report.

“We are seeing more frequent heatwaves, and the heatwaves are hotter than they would have been without climate change,” Friederike Otto, senior lecturer in climate science at Imperial College London, told Reuters.

The health impact of the heatwave has been in focus, with particular care given to the elderly and vulnerable.

“People don’t really feel they have to drink a lot, so they can get dehydrated and it’s really dangerous for older people,” said stand-in manager Annick Van huylenbroeck, at a nursing home in Grimbergen, north of Brussels.

In Italy, temperatures were expected to hit 40C across a swathe of the north and centre throughout the week, as well as in the southern heel of Italy’s boot, Puglia, and the islands of Sardinia and Sicily.

Five cities were placed on the highest red alert because of the heatwave on Tuesday. The alert, which warns of serious health risks tied to the weather, will cover nine cities on Wednesday, rising to 14 on Thursday, including many of Italy’s largest metropolitan areas, including Rome, Milan and Florence.

Although the mercury dipped back towards more normal summer levels in Spain and Portugal, firefighters in both countries were still battling multiple blazes.

More than 30 wildfires continued to ravage parts of Spain, with authorities paying special attention to four blazes in Castile and Leon and Galicia.

In Losacio, in northwestern Zamora province, where two people have died and three critically injured, more than 6,000 people in 32 villages have been evacuated.

“The drought affects us a lot, a lot. Keep in mind there hasn’t been rain for the last five or six months and some people from these towns are elderly, the properties are not well cleared and they are full of overgrown vegetation,” said Hanibal Pena, 69, who lives in Tabara, Zamora province.

So far this year 70,000 hectares (173,000 acres) have been burned in Spain, around twice the average of the last decade, official data showed before the heatwave.

In neighbouring Portugal, around 50 municipalities, mainly in central and northern regions, still faced “maximum risk” of wildfires, according to the IPMA weather institute.