Given the ongoing conflicts across West Asia and the visceral animosities and strategic anxieties they have generated, there are widespread concerns that the situation in Gaza would ignite a region-wide conflagration. A Palestinian is evacuated during clashes with Israeli troops at the Gaza-Israel border at a protest demanding the right to return to their homeland, in the southern Gaza Strip March 31, 2018. Credit: Reuters/Ibraheem Abu Mustafa

On Friday, March 30, about 30,000 Palestinians across Gaza marched to the barrier that separates their territory from Israel. Described as the “March of Return”, the demonstrators were commemorating “Land Day”, when the first marches had taken place in 1976 to protest the forcible acquisition of Palestinian land by Israel; at that time, six demonstrators had been killed.

The demonstrators now were also asserting the right of return of Palestinian refugees and their descendants who were evicted from their land when Israel was created in 1948 and in subsequent conflicts between Israel and its Arab neighbours. These protests will go on till May 14, which will mark the 70th anniversary of the creation of Israel.

On day one of the protests, Israeli armed forces, backed by tanks and snipers, fired on the demonstrators, killing 16 of them and injuring 1,400, with about 750 of them being hit by live bullets. While the UN secretary general and the EU head of foreign affairs called for an independent enquiry into the shootings, the Israeli prime minister, Benjamin Netanyahu, applauded his soldiers and asserted, “Israel acts vigorously and with determination to protect its sovereignty and the security of its citizens.”

The Israeli military spokesman said what had taken place was “not a protest demonstration” but “organised terrorist activity” by Hamas. He warned, “If it continues, we shall have no choice but to respond inside the Gaza Strip against terrorist targets which we understand to be behind these events.”

Israeli defence minister Avigdor Lieberman spoke contemptuously of the demand for an enquiry, saying, “I do not understand the chorus of hypocrites who want a commission of inquiry. They got confused and thought Hamas organised a Woodstock Festival yesterday and that we should give them flowers.” On Saturday, the US rejected a draft UN resolution calling for an independent enquiry into the killings.

As in the case of previous Palestinian-Israeli confrontations, there have been several criticisms of the use of disproportionate force by Israel, its inability to prove that the demonstrators had threatened its soldiers and the deliberate killing or wounding of young people who were using slingshots. All these criticisms have been peremptorily dismissed by Israeli government sources.

However, the Israeli human rights body, B’teselem, has said, “These [killings] are the predictable outcomes of a manifestly illegal command: Israeli soldiers shooting live ammunition at unarmed Palestinian protesters. What is predictable, too, is that no one — from the snipers on the ground to top officials whose policies have turned Gaza into a giant prison — is likely to be ever held accountable.”

The new head of the left-wing Meretz party, Tamar Zandberg, has called on Israeli authorities to open an investigation into the violence and has criticised the lax approach of the armed forces in regard to the use of force; she said, “We must not allow a ‘trigger-happy’ policy to lead to the loss of innocent lives.”

Gaza is 41 km long and 6-12 km wide; it has a total area of 365 square km and a population of about two million, making it the third most densely populated territory in the world. Israel disengaged from Gaza in 2005, but maintains full control over its land and sea borders and its airspace. Israel also maintains a buffer zone at its land borders, which deprives Gaza of about 30% of its arable land. From 2007, Israel has also blockaded Gaza, severely crippling the territory economically, leaving 70% of its people unemployed and 80% in dire poverty. International organisations continued to see it as territory occupied by Israel. 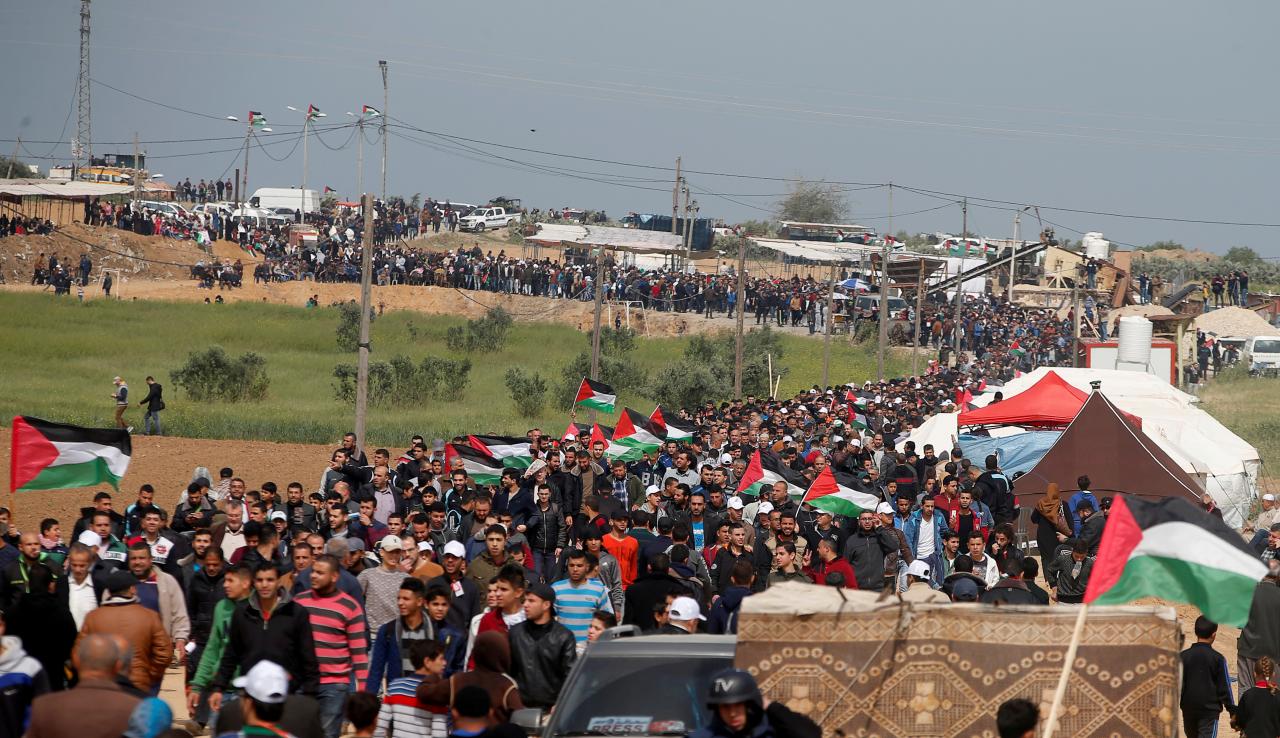 Palestinians attend a tent city protest along the Israel border with Gaza, demanding the right to return to their homeland, east of Gaza City March 30, 2018. Credit: Reuters/Mohammed Salem

This latest confrontation brings together all the facets of the Palestinian-Israeli dispute from 1948 till today – the creation of Israel which is viewed as a “Naqba” (‘catastrophe’) by the Palestinians; the steady usurpation of occupied territories by Israel to set up Jewish settlements; the demand for a two-state solution that would grant the Palestinians their own sovereign and economically viable state; the right of return of the refugees, and the Palestinian claim to East Jerusalem that will be the capital of the Palestinian state.

All of these issues have got complicated by recent politics. First, there is a split in Palestinian ranks, with a toothless Palestine Authority, headed by President Mahmoud Abbas in Ramallah in the West Bank, and the government in Gaza which is headed by the Islamist organisation, Hamas. Hamas has been described by Israel and the US as a terrorist organisation, with which Israel has engaged in several conflicts over the last decade.

Second, with warming ties between Israel and some Arab countries led by Saudi Arabia to shape a joint front against Iran, the Arab nations no longer present a unified front against Israel on the Palestine issue.

Third, the intervention of the Donald Trump administration has further loaded the dice in favour of Israel. Besides recognising Jerusalem as Israel’s capital and deciding to shift the US embassy to this city by mid-May 2018, Trump has also announced that he will soon propose a “deal of the century” to finally settle the Palestinian-Israel issue. However, information about the “deal” leaked in the media suggests that Israel will keep Jerusalem and most of the occupied territories, with only non-contiguous areas, referred to by critics as ‘Bantustans’, being set aside for the Palestinians. Again, there will be no right of return for the refugees.

Four, neighbouring Arab states are also actively involved in intra-Palestinian politics: Egypt is said to have to have compelled Hamas to de-link itself from the Muslim Brotherhood and is now promoting a Hamas-Ramallah reconciliation. Egypt and the UAE are believed to have their own favourites to succeed Mahmoud Abbas as head of the Palestine Authority and thus obtain a more pliable political leadership that will be amenable to the US-sponsored proposals.

Now, the Palestinians fear, Trump, in tandem with the Israel lobby in Washington and his Arab allies, may have an even more diabolical scheme in mind. In mid-March this year, the White House convened a conference to discuss the humanitarian situation in Gaza, an unprecedented American initiative given that the US has hardly ever shown much concern for the Palestinians, particularly those in Gaza.

The curtain-raiser to the conference came from Jason Greenblatt, Trump’s envoy for the Middle East, who in the Washington Post blamed Hamas for all the woes of the people of Gaza and called for a global effort, backed by the US, to develop Gaza’s economy, particularly its offshore oil and gas potential. He candidly noted that this would not only benefit the Palestinians but also the US, Israel and Egypt, and would take the region forward towards “comprehensive peace”, though most observers see Mediterranean energy interests of the principal parties as propelling the initiative.

The meeting on Gaza took place on March 13-14, just hours after an assassination attempt in Gaza on the Palestinian Prime Minister Rami Hamdallah and the Palestinian head of security, General Majid Faraj. The US promptly blamed Hamas for this attempt, with Greenblatt declaring that Hamas was unfit to govern Gaza, but making no mention of the ten-year old blockade imposed on Gaza by Israel and the occupation of Palestinian territories for several decades. 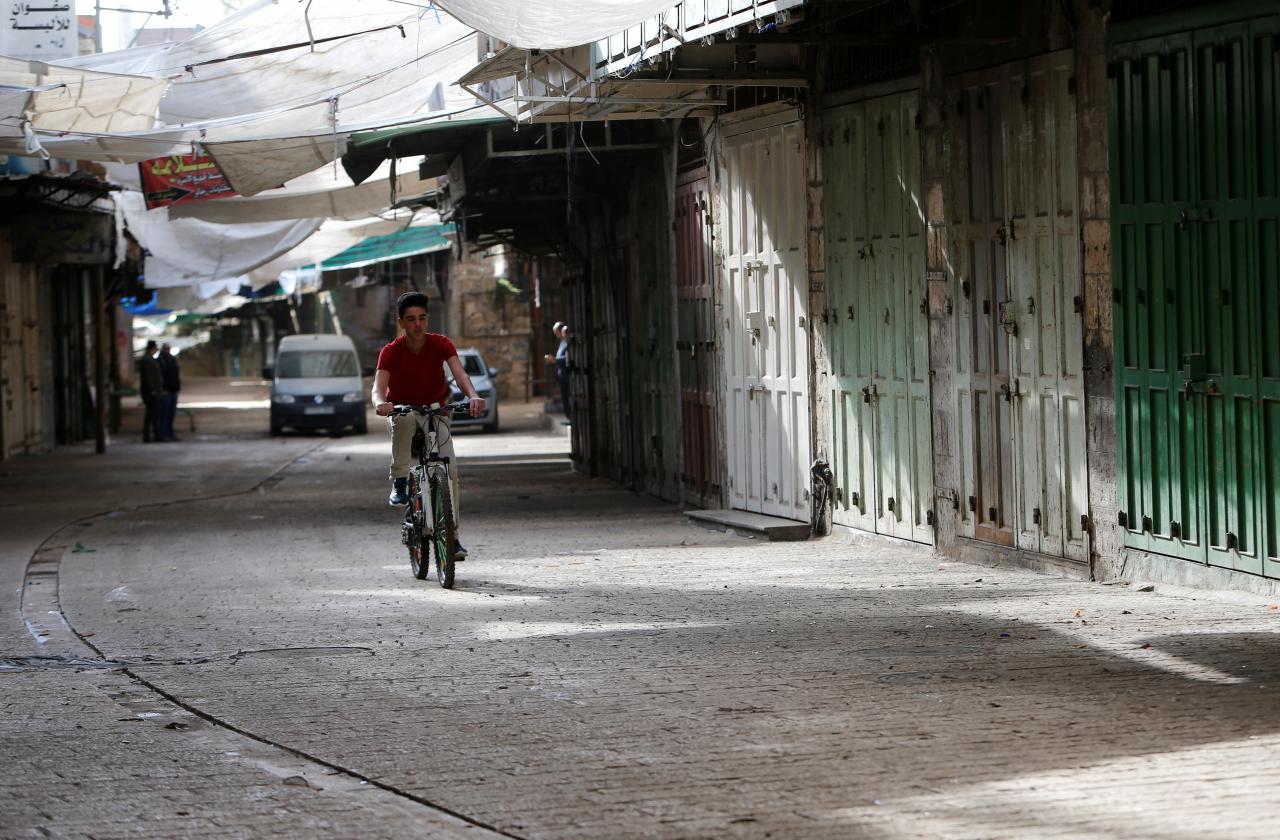 A man passes closed shops as Palestinians call for a general strike, in Hebron, in the occupied West Bank March 31, 2018. Credit: Reuters/Mussa Qawasma

Though Mahmoud Abbas has also blamed Hamas, there is as yet no evidence to support the accusation, nor is there any credible reason to explain why Hamas would want to carry out the killings, given that it backs reconciliation with Ramallah.

The conference took place without any Palestinian representatives, but had 19 attendees from Israel, Egypt, Jordan, Saudi Arabia, Qatar, Bahrain, Oman, and the United Arab Emirates, as well as several European nations. Electricity, water, sewage and health projects were discussed, though no specific proposals were approved. A US-Israel-Egypt committee has been set up to coordinate relief and humanitarian assistance to Gaza, with the possibility of an airport and a seaport being developed in Gaza, most probably by Egyptian contractors.

This meeting has rung alarm bells across the region, with most commentators seeing in it a conspiracy to harm Palestinian interests. The Doha-based Al Jazeera believes that, in the guise of economic development and joint projects, this will bring Israel back into Gaza.

The London-based news portal, al Araby sees this initiative as laying the basis to impose a US-sponsored settlement on the Palestinians: since the US plan cannot be pushed through a transparent political process, the Americans and their Arab and Israeli allies are pursuing the route of “humanitarian intervention”. This is being done by making living conditions in Gaza more onerous and ensuring that there is no reconciliation between Ramallah and Hamas, so that the “deal of the century” can be imposed on the beleaguered Palestinian people.

Perhaps, the negative response to the conference from the Arab populace that remains firmly wedded to the Palestinian cause has led the pro-US Arab leaders to distance themselves from the discussion. Fatina al Dajani, writing in the Saudi-owned Al Hayat, sees this event as an attempt to detach Gaza from the larger Palestinian interests, in line with previous American divide-and-rule policies in the region. But she points out that according to leaks from the conference, there was considerable opposition to US plans from Arab leaders, which has led the US to say that the announcement of the Palestinian peace plan has now been postponed by one or two years.

Given the ongoing conflicts across West Asia and the visceral animosities and strategic anxieties they have generated, there are widespread concerns that the situation in Gaza would ignite a region-wide conflagration. There are fears for instance that Hezbollah could be pulled into the Gaza conflict if Palestinian casualties continue to rise, particularly after the US embassy moves to Jerusalem.

Israeli leaders Netanyahu and Lieberman have for several weeks been talking of attacking Iranian and Hezbollah positions in Syria and taking on Hamas in Gaza. This might be more difficult than they anticipate. Hezbollah has reminded Israel that it has 130,000 missiles, its 50,000-strong fighters are battle-hardened, and it has the full backing of Iran; thus, it will be able to give a good account of itself in Gaza or Syria.

Again, the Qassam brigades, the military wing of Hamas, conducted exercises in Gaza on March 25, in which it deployed missiles, unmanned aerial vehicles, and live ammunition. Over 30,000 fighters took part in anticipation of an Israeli attack. This is the first occasion when the Qassam Brigades have displayed their battle-readiness by conducting such public exercises.

Thus, Palestine threatens to emerge as one more theatre of conflict in the war-torn region.