Turkey's Erdogan Isn't as Strong as He Looks; That's What Makes Him Dangerous

Erdogan will apparently stop at nothing to centralise power – and every move that backfires makes him even more desperate. 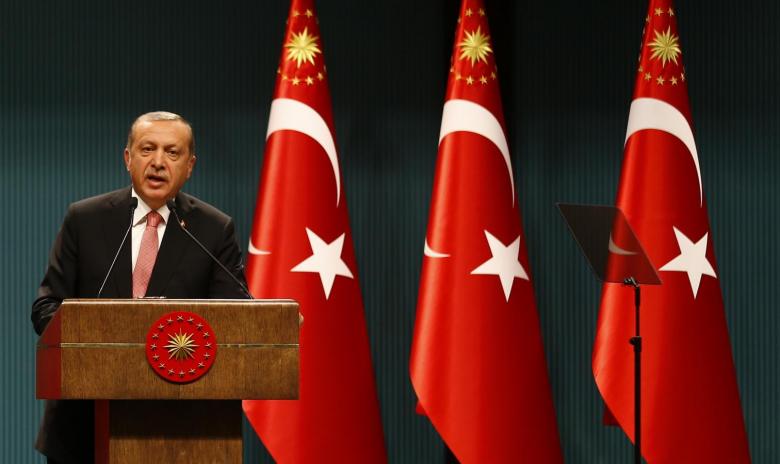 At first glance, Turkey’s Recep Tayyip Erdogan’s drive to create an executive presidency with almost unlimited power through a nationwide referendum looks like a slam-dunk.

The man hasn’t lost an election since 1994, and he’s loaded the dice and stacked the deck for the April 15 vote. Using last summer’s failed coup as a shield, he’s declared a state of emergency, fired 130,000 government employees, jailed 45,000 people – including opposition members of parliament – and closed down 176 media outlets. The opposition Republican People’s Party says it’s been harassed by death threats from referendum supporters and arrests by the police.

Meanwhile, he’s deliberately picked fights with Germany, Austria and the Netherlands to help whip up a storm of nationalism, and he charges that his opponents are “acting in concert with terrorists.” Selahattin Demirtas, a member of parliament and co-chair of the Kurdish-dominated People’s Democratic Party, the third largest political formation in Turkey, is under arrest and faces 143 years in prison. Over 70 Kurdish mayors are behind bars.

So why is Erdogan so nervous? Because he has reason to be.

The juggernaut that Erdogan and his Justice and Development Party (AKP) put together to dismantle Turkey’s current political system and replace it with a highly centralised executive with the power to dismiss parliament, control the judiciary and rule by decree has developed a bit of a wobble.

First, Turkey’s nationalists – in particular the right-wing Nationalist Movement Party (MHP) – are deeply split. The leadership of the MHP supports a “yes” vote on the referendum, but as much as 65% of the rank and file are preparing to vote “no.”

Second, there is increasing concern over the economy, formerly the AKP’s strong suit. Erdogan won the 2002 election on a pledge to raise living standards – especially for small businesses and among Turks who live in the country’s interior – and he largely delivered on those promises. Under the AKP’s stewardship, the Turkish economy grew, but with a built-in flaw.

The 2000s were a period of rapid growth for emerging economies like China, Russia and Turkey. China did it by building a high-power manufacturing base and exporting its goods to the global market. Russia raised its economy through commodities sales, particularly oil and gas. Turkey’s huge spurt, however, was built around domestic consumption, in particular, real estate and construction. Indeed, Turkey’s historical strength in manufacturing has languished.

Much of the construction boom was financed through foreign loans, and as long as investors were comfortable with the internal situation in Turkey – and money was cheap – real estate was Erdogan’s Anatolian tiger. But when the US tightened up its monetary policies in 2013, those loans either dried up or got more expensive.

Turkey wasn’t the only victim of US’s tight money policies. Washington’s monetary shift also badly damaged the economies of Brazil, South Africa, India and Indonesia. But the effect on Ankara has been to increase the debt burden and fuel a growing trade imbalance. Growth fell from 6.1% in 2015 to 1.5% in 2016.

The fall of the Turkish lira means imports cost more at a time when Turkey’s private sector has accrued a foreign exchange deficit of $210 billion. Consumer inflation will almost certainly reach 11-12% this year and the jobless rate is over 12%. Among young Turks, age 15-24, that figure is over 25%. Almost four million people are out of work, and many Turks now spend 50% of their income on food, housing and rent.

To add to these woes, the credit agencies Moody’s, Standard and Poor and Fitch recently designated Turkey’s status as “non-investment” and downgraded its economic outlook from “stable” to “negative.” Part of the downgrade was based on politics, not the economy. Fitch pointed out that if Erdogan’s referendum passed, it “would entrench a system in which checks and balances have been eroded.”

Businesses are generally not bothered by authoritarian regimes, but they are uncomfortable with instability and a cavalier approach to the rule of law. Erdogan’s erratic foreign policies and the government’s seizures of private businesses whose owners choose to oppose him do not create an atmosphere conducive to investor confidence.

There is also growing nervousness about Erdogan’s internal and external policies. Turkey once had a policy of “no trouble with neighbours,” but Ankara is suddenly fighting with everyone. Erdogan strongly supported efforts to overthrow the Syrian government of Bashar al-Assad. He backed the Muslim Brotherhood in Egypt. He put troops in northern Iraq aimed at keeping the Kurds down. He started a war with his own Kurds and bullies and intimidates any domestic opposition.

A case in point is the lucrative tourist industry that normally contributes about 5% of Turkey’s GNP. Turkey is the sixth most visited country in the world, but the industry was down 36% in 2016, a loss of $10 billion.

Formerly, large numbers of tourists visited from Russia and Iran. But Erdogan alienated the Russians when he shot down one of their bombers in 2015 and angered Iran when he went to Saudi Arabia and denounced the Iranians for trying to spread their Shiite ideology and “Persian nationalism” throughout the Middle East. As a result, tourism from both countries largely dried up, hitting Istanbul and coastal cities like Antalya particularly hard.

Iranians and Russians aren’t the only ones looking elsewhere for fun and relaxation. Erdogan’s sturm und drang rhetoric directed at European countries that refused to let him campaign for his referendum among their Turkish populations – “Nazis” and “fascists” were his favoured epithets to describe Germany, the Netherlands and Austria – has tourists from the West looking to vacation in Greece, Spain and Italy instead.

Trouble in the neighbourhood

To label Erdogan’s foreign policy “schizophrenic” is an understatement.

On one hand, he’s backed off from his earlier demand that Syrian President Assad must go, and he’s working with the Russians and Iranians – and Egyptians – to find a negotiated settlement to the horrendous civil war.

On the other, he is wooing Saudi Arabia, the major backer of al Qaida-associated groups in Syria who’ve made it clear that they aren’t interested in negotiations or a political settlement. He’s also clashing with Russia and the US over their support for Kurdish forces battling the ISIS and al Qaida.

In one rather bizarre example of schizoid foreign policy, Turkey sponsored a March 14 meeting of 50 Syrian tribal leaders to form an “Army of the Jezeera and Euphrates Tribes” to fight Russia, Iran, Hezbollah and the Kurdish Democratic Union Party in Syria. Beating up on the Kurds is standard Erdogan politics, but how he squares attacking Russia and Iran while professing to support a diplomatic solution to the Syrian civil war isn’t clear.

His political calculations keep backfiring. For instance, when Iran signed its international nuclear agreement and sanctions were lifted, Turkish businesses were eager to ramp up trade with Tehran. Erdogan’s searing attack on Iran largely scotched that, however, and the Turkish president has very little to show for it. Erdogan calculated that embracing Saudi Arabia and the Gulf monarchies would more than offset alienating Iran, but that hasn’t happened.

The United Arab Emirates, Saudi Arabia, Kuwait and Qatar have a combined overseas investment portfolio of $262 billion, but only $8.7 billion of that went to Turkey. Europe makes up the great bulk of foreign investments in Turkey, distantly followed by the US and Russia.

In part, this is because the Gulf monarchies have their own financial difficulties, given low oil prices and the grinding war they are fighting in Yemen. But one suspects that Saudi Arabia is wary of Erdogan’s AKP, which is a cousin of the Muslim Brotherhood. The Saudis consider the Brotherhood their main enemy after Iran, and they strongly supported the 2013 military coup against the Egyptian Brotherhood government. The recent thaw in relations between Turkey and Egypt has resulted in a chilling of ties between Riyadh and Cairo.

Meanwhile, the ISIS has recently targeted Turkey, in large part as blowback from the Syrian civil war. Ankara formerly turned a blind eye to the ISIS’s supply lines into Syria because Erdogan wanted to overthrow the Assad government and replace it with a Muslim Brotherhood-friendly regime. Now that policy has backfired on Turkey, much as US support for the Mujahideen against the Soviet Union in Afghanistan led to the formation of al Qaida and the 2001 attacks on the World Trade Center and the Pentagon.

The Kurds have also engaged in a bombing campaign, but that is a response to Erdogan’s attacks on Kurdish cities in southeastern Turkey.

Getting to yes – or else

It’s not clear how widespread the “no” vote sentiment is, although it supposedly includes up to 100 AKP parliament members worried about concentrating too much power in the president’s hands.

Pollsters say a significant number of voters are unwilling to say how they will vote. In the current atmosphere of intimidation, it could mean those “refuse to say” will turn to “no.” Certainly, Erdogan’s prediction of a 60% approval has gone a-glimmering.

What happens if people do vote no? And would Erdogan accept any outcome that wasn’t yes?

One disturbing development is the formation of a paramilitary group called ‘Stay as Brothers, Turkey.’ Organised by Orhan Uzuner, whose daughter is married to Erdogan’s son Bital, the group claims up to 500 members. The opposition newspaper Cumhuriyet calls the group “Erdogan’s militia,” and some members of the Nationalist Movement Party say the Brothers are sponsoring weapons training and encouraging members to arm themselves. With the military firmly under control following last year’s attempted coup, even a small group like the Brothers could play a major role if Erdogan decides he’s finished with the democratic process.

Certainly, the president is in a bind. He needs foreign investments and tourism to get the economy back on track, but he’s alienating one ally after another.

He could tighten Turkey’s monetary policies to staunch the outflow of capital, but that would slow the economy and increase unemployment. He could lower interest rates to stimulate the economy, but that would further weaken the lira.

His strategy at this point is to double down on getting a yes vote. If he fails, things could get dangerous.

This article was originally published on Foreign Policy in Focus.