A Turkish official has reported that Erdogan wants control over the armed forces, in yet another move to consolidate his power after the failed coup. 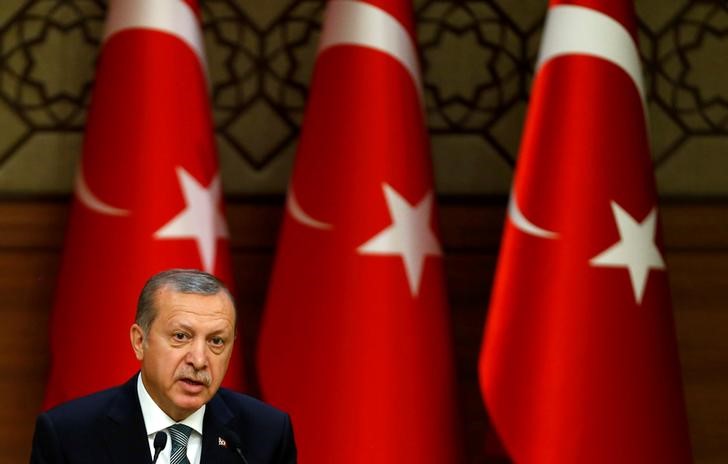 Turkish President Tayyip Erdogan makes a speech during his meeting with mukhtars at the Presidential Palace in Ankara, Turkey May 4, 2016. Credits: REUTERS/Umit Bektas/File Photo

Ankara/Istanbul: Turkish President Recep Tayyip Erdogan wants the armed forces and national intelligence agency brought under the control of the presidency, a parliamentary official said on Thursday, part of a major overhaul of the military after a failed coup.

Erdogan‘s comments came after a five-hour meeting of Turkey’s Supreme Military Council (YAS) – chaired by Prime Minister Binali Yildirim and including the top brass – and the dishonourable discharge of nearly 1,700 military personnel over their alleged role in the abortive putsch on July 15-16.

Erdogan, who narrowly escaped capture and possible death on the night of the coup, told Reuters in an interview last week that the military, NATO’s second biggest, needed “fresh blood”. The dishonourable discharges included around 40% of Turkey’s admirals and generals.

Turkey accuses US-based Islamic cleric Fethullah Gulen of masterminding the coup and has suspended or placed under investigation tens of thousands of his suspected followers, including soldiers, judges and academics.

In the aftermath of the coup, media outlets, schools and universities have also been closed down.

“The president said that … he would discuss with opposition parties bringing the general staff and the MIT (intelligence agency) under the control of the presidency,” the parliamentary official said.

Such a change would require a constitutional amendment, so Erdogan‘s Islamist-rooted AK Party would require the support of opposition parties in parliament, Turkish media said.

Both the general staff and MIT currently report to the prime minister’s office. Putting them under the president’s overall direction would be in line with Erdogan‘s push for a new constitution centred on a strong executive presidency.

Justice minister Bekir Bozdag repeated Ankara’s request to the US to swiftly extradite Gulen, once a powerful ally of Erdogan. He cited intelligence reports suggesting that the 75-year-old preacher might flee his residence in rural Pennsylvania.

Gulen has condemned the coup and denies any involvement.

Turkish foreign minister said more than 300 personnel in his ministry had links to Gulen and that it had dismissed 88 employees.

Separately, Turkey’s biggest petrochemicals company Petkim said its chief executive had resigned and the state-run news agency Anadolu said he had been detained in connection with the failed coup.

Anadolu also said Ankara prosecutors requested the seizure of the assets of 3,049 judges and prosecutors detained as part of the investigation into the coup attempt.

Western governments and human rights groups have condemned the coup, in which at least 246 people were killed and more than 2,000 injured. But they have also expressed disquiet over the scale and depth of the purges, fearing that Erdogan may be using them to get rid of opponents and tighten his grip on power.

The government said on Wednesday it had ordered the closure of three news agencies, 16 television channels, 45 newspapers, 15 magazines and 29 publishers. This announcement followed the shutting down of other media outlets and detention of journalists with suspected Gulenist ties.

In Washington, state department spokesman John Kirby said the US was “deeply concerned” about the latest reports of Turkish closure of news media outlets and was seeking clarification from the government about the action.

“In a constitutional state – and this is what worries me and what I am following closely – the principle of proportionality must be ensured by all,” she told a news conference in Berlin.

Cavusoglu told broadcaster CNN Turk that some prosecutors with links to Gulen had fled to Germany and he urged Berlin to extradite them. He also said he saw “positive change” in the attitude of the US towards Ankara’s request to extradite Gulen to Turkey.

Even before the failed coup, Turkey was struggling with major security challenges including attacks by Kurdish militants and ISIS, a grim reality underscored by tourism data on Thursday showing a 40% fall in foreign visitors in June.

Turmoil in Turkey’s armed forces raises questions about its ability to contain the ISIS militant threat in neighbouring Syria and the renewed Kurdish insurgency in its southeast, military analysts say.

The AK Party, founded by Erdogan and in power since 2002, has long had testy relations with the military, which for decades saw itself as the ultimate guardian of Turkey’s secular order and legacy of the nation’s founder Mustafa Kemal Ataturk. The military has ousted four governments in the past 60 years.

However, Erdogan says the armed forces have been infiltrated in recent years by Gulen’s supporters. “The army has to stop being the army of the Fethullah Gulen terrorist organisation,” justice minister Bozdag said.

In a symbolic sign of how civilian authorities are now firmly in charge, Thursday’s military council meeting was held at the prime minister’s office rather than general staff headquarters.

Yildirim accompanied senior military officers to pay respects at Ataturk’s mausoleum in Ankara ahead of the meeting.

“We will surely eliminate all terror organisations that target our state, our nation and the indivisible unity of our country,” Yildirim said in televised remarks at the mausoleum.

Changes since the coup include bringing the gendarmerie, which is responsible for security in rural areas, and the coast guard firmly under interior ministry control rather than under general staff control.

CNN Turk has reported that more than 15,000 people, including around 10,000 soldiers, have been detained so far over the coup, citing the interior minister. Of those, more than 8,000 were formally arrested pending trial, it said.

This month’s events have exacerbated strains in Turkey’s relations with the US. Washington has responded cautiously to the request to extradite Gulen, saying it must provide clear evidence of his involvement in the coup plot.

Bozdag said Turkey was receiving intelligence that Gulen might flee, possibly to Australia, Mexico, Canada, South Africa or Egypt. Egypt said it had not received an asylum request.

Gulen built up his reputation as a Sunni Muslim preacher with intense sermons. His movement, known as Hizmet, or “Service” in Turkish, set up hundreds of schools and businesses in Turkey and later abroad. His philosophy stresses the need to embrace scientific progress, shun radicalism and build bridges to the West and other religious faiths.

The US and EU, which Turkey aspires to join, have both urged Ankara to exercise restraint in its crackdown on suspected Gulen supporters and to ensure those arrested have a fair trial.

Amnesty International has said detainees may have suffered human rights violations, including beatings and rape – an accusation roundly rejected by Ankara.

The EU has also bridled at talk in Turkey – from Erdogan down – of restoring the death penalty, a move Brussels said would scupper Ankara’s decades-old bid to join the bloc.

Tourism, a pillar of the economy, has been badly hit by a series of deadly bombings in Turkey, including one at Istanbul’s airport in June that killed 45 people, and by tensions with Russia. Data showing a 40% drop year-on-year in June in the number of foreign visitors to Turkey is further bad news for the government. The decline was the biggest in 22 years.