David Shulman depicts the routine harassment faced by Palestinian shepherds and farmers at the fields and grazing grounds near Ein Sukut. 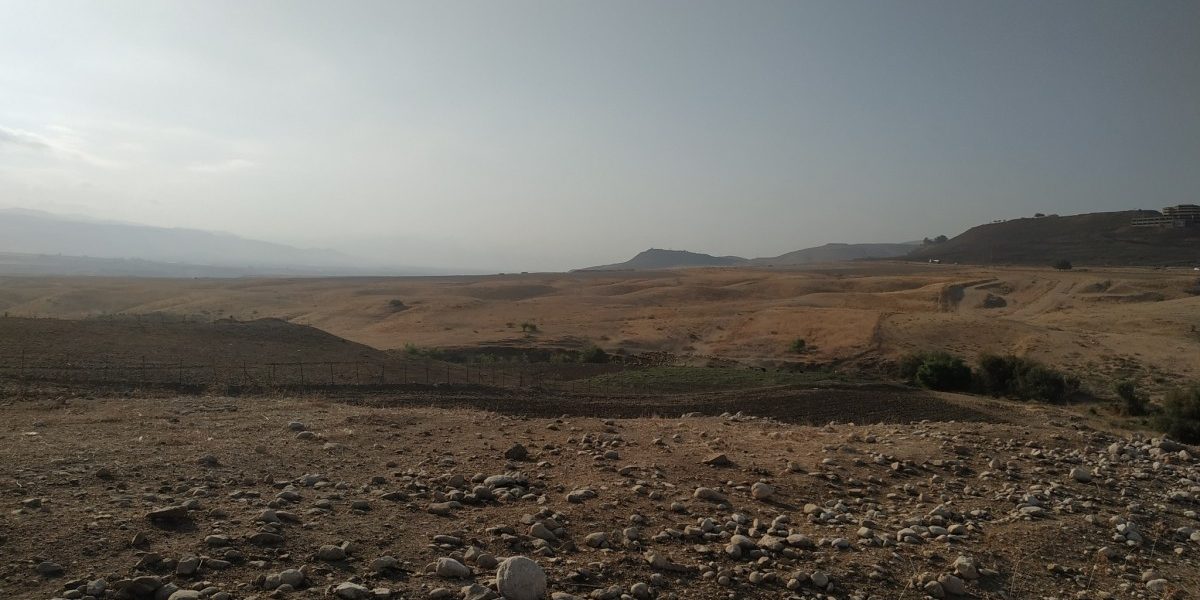 Wednesday seems to be the day the settler has set aside for harassing Palestinian shepherds. That’s what Ahmad says, and he should know. Last Wednesday, October 14, it ended in murder.

We know his name, and we may even have his picture. Ahmad can identify him, since Ahmad saw him drive his ATV into the midst of the herd of sheep, scattering them in every direction. Not once but many times, for some 20 awful minutes. Finally, Ahmad says, the settler ran over one of the sheep. It took her some time to die. Arik, summoned by phone, arrived quickly; he and Ahmad picked her up and got her to a vet, who took one look at her and said there was nothing he could do. Arik has written about what he saw in her eyes as life slipped away, as you may read here. Today Ahmad seems nervous, scared, with good reason. He wants us near him. These are the last days in the year that Ahmad and his almost-deaf father Husain will be staying in their tents in the flat stretch close to the natural spring and pools called Ein Sukut. On Sunday they will move up the mountain ridge to Farisiyya, for the rainy months. They think of Farisiyya as their true home. Seasonal migrations are a normal part of Bedouin life in the Jordan Valley, and elsewhere. In the past, Farisiyya has been targeted by the army for massive demolitions.

The pools are surrounded by thick bulrushes, like in the story of Moses;  hidden jewels of cool green water very close to the Jordanian border. The access roads take you past fenced-off dusty plots of land with signs warning you not to enter because there are still active land-mines there. I’ve bathed in Ein Sukut after hot days on the hills with the shepherds.

Sometimes young hikers, Israelis, many of them ultra-orthodox, turn up to swim. When I was last there, maybe four years ago, Palestinian kids were also bathing – a kind of utopian mix of young people whose nationalities didn’t matter. I didn’t see any today. There was a time – from 1997 on – when Ein Sukut was included in a large Closed Military Zone, like much of the land in the Jordan Valley.  In practice, significant chunks of privately owned Palestinian land were handed over to the settlers. In 2002, the CMZ in this area was reduced in size, but access to the spring remained restricted mainly to Jews. The idea was clearly to empty Ein Sukut and its surrounding fields of Palestinians.

In 2015, Palestinian landowners appealed to the Supreme Court to return the stolen lands, and the State announced that it intended to abolish the CMZ and to come to an agreement with the Palestinian landowners. The Court ruled in support of this decision in January 2020. For the last four years or so, the pools of Ein Sukut have been a popular destination, especially in summer, for all kinds of people, as I saw with my own eyes. 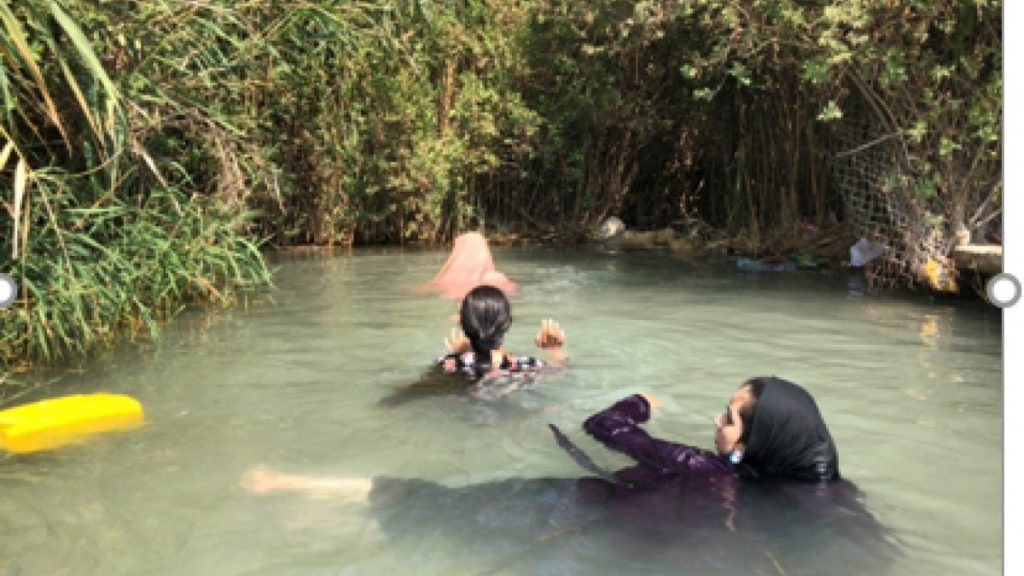 So can Palestinian shepherds and farmers now freely access their fields and grazing grounds near Ein Sukut and also bathe in the spring? Not quite. There are ongoing, routine attempts by settlers, often backed up by soldiers, to keep Palestinians away from those lands. For an Israeli settler working in the fields of Ein Sukut, the Supreme Court is a distant, nebulous entity.

For several years we have chronicled in these pages the violent harassment that the shepherds here have received: detentions, attacks on their homes and on their water supply, some of them reprisals for daring to work with us to recover rights to their land [see here, here, and here]. 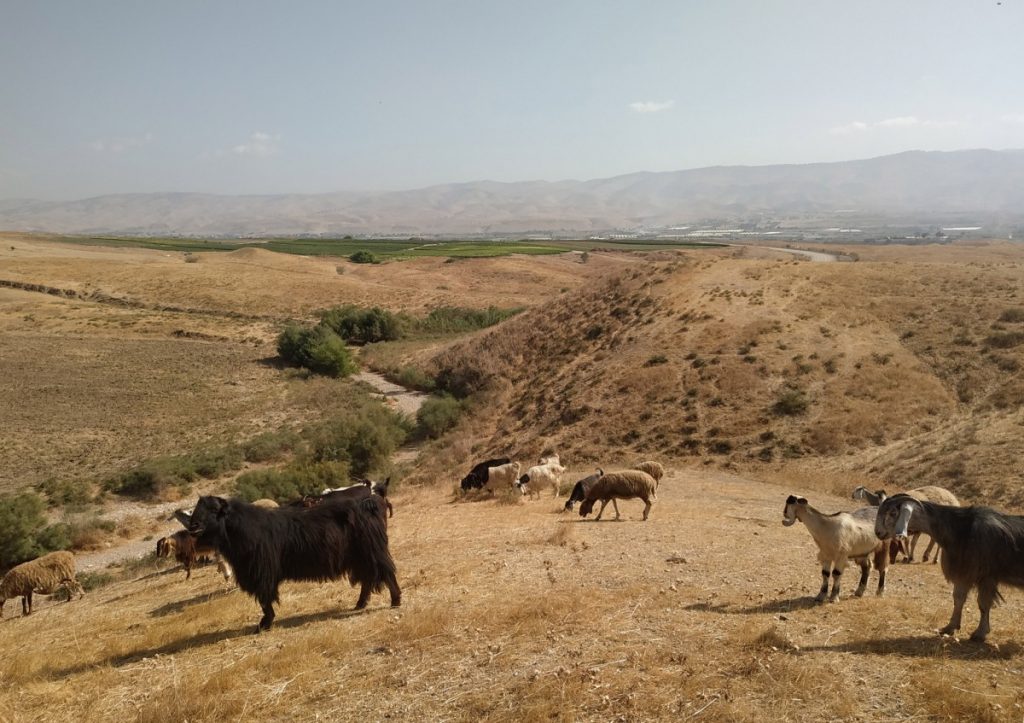 We leave Ariel and David B. with Ahmad, Husain and the sheep, while Arik and I set off in search of the sheep-killer. Back and forth on those gravel roads, the mine-fields on either side. We see Palestinian farmers and settler farmers at work in their respective fields. And we find the ATV. But by the time we get close enough for good pictures, the killer has gone home; someone else is driving the vehicle. We talk to him for a while. He confirms the verbal picture Ahmad had given Arik.

By now there’s probably enough evidence to file a complaint with the police, and there’s at least a chance they won’t simply ignore it. We won’t let them. I think the dead sheep deserves justice, if not for her sake then for ours, for the tattered dignity of being human. In the end, it always comes down to this – to the life of one, singular, irreplaceable, innocent sheep or goat, one Palestinian man or woman, one child.

Around noon the police show up, probably summoned by the settlers. No policeman makes rounds in the remote sands of Ein Sukut. They take our ID cards, they listen to the story we have to tell. If you try hard, you might even be able to imagine one of the them, an affable young man, feeling an unanticipated twitch of empathy. They tell us what we already know, that we can file the complaint in Ariel or at Hizmeh. They leave. 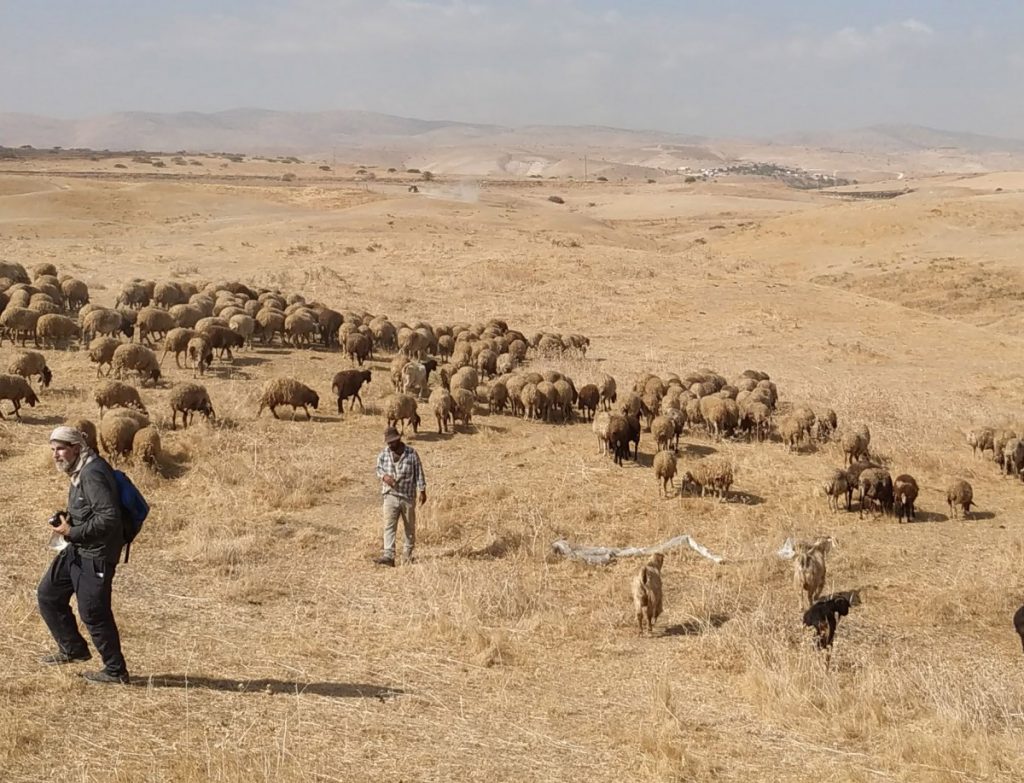 It’s too hot for more grazing. We follow Ahmad to the tents; Husain will bring back the herd. Ahmad’s mother is sitting in immoveable dignity on a mat, watching the day trickle past. Outside, I see the most ravishing laundry line in the world outlined against the great ridge to the west, the hills of the Judean desert.

Coffee is served in tiny paper cups. One by one, children filter back from their school. I soon lose count of how many there are – maybe one for every age between, say, three and ten? The grandmother tells us, in a grandmotherly manner, that they are exhausted from the long walk home – many miles, in the heat. One of them is curious about us, we who have dropped in from the moon. He proudly tells me his name: Yusuf. Arik speaks to the lawyer who will handle the case of the murdered sheep. We take our leave. Arik says to Ahmad as we get up, “Do you need me to come tomorrow? I’m not sure I can.” Ahmad says, “Please come on Friday.”

It’s hard to leave – always. The dangers they face never go away. They are our friends. We can’t always protect them. And there are the more mundane problems too. I want to bring Husain to a good audiologist in Jericho or some other city in the territories. I want him to have his hearing tested so we can get him a hearing aid. He can still hear a little if you’re close to him;  he points to his ears and says, with a gesture of despair, or maybe resignation: al-sama’a – “My hearing is bad.” I think we could change that. I’m not sure how we’ll manage it, but we’ll find a way. 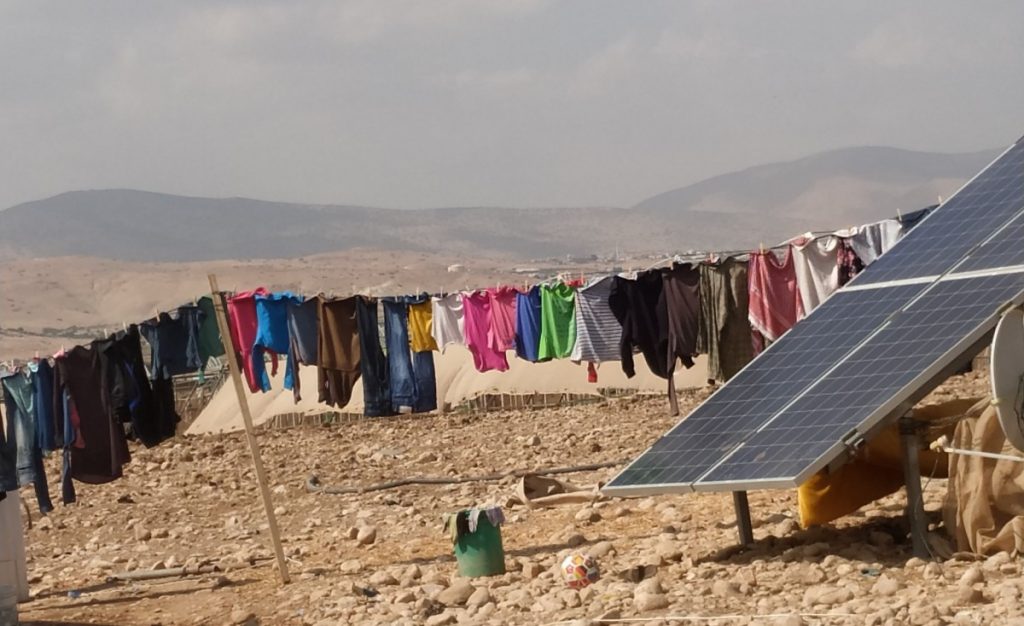