IMF Urged to Seriously Reconsider its Austerity Agenda in Ecuador

"...the tragic outcomes of the COVID-19 pandemic [in Ecuador] were not incidental. On the contrary, they follow directly from the austerity reforms attached to IMF money." 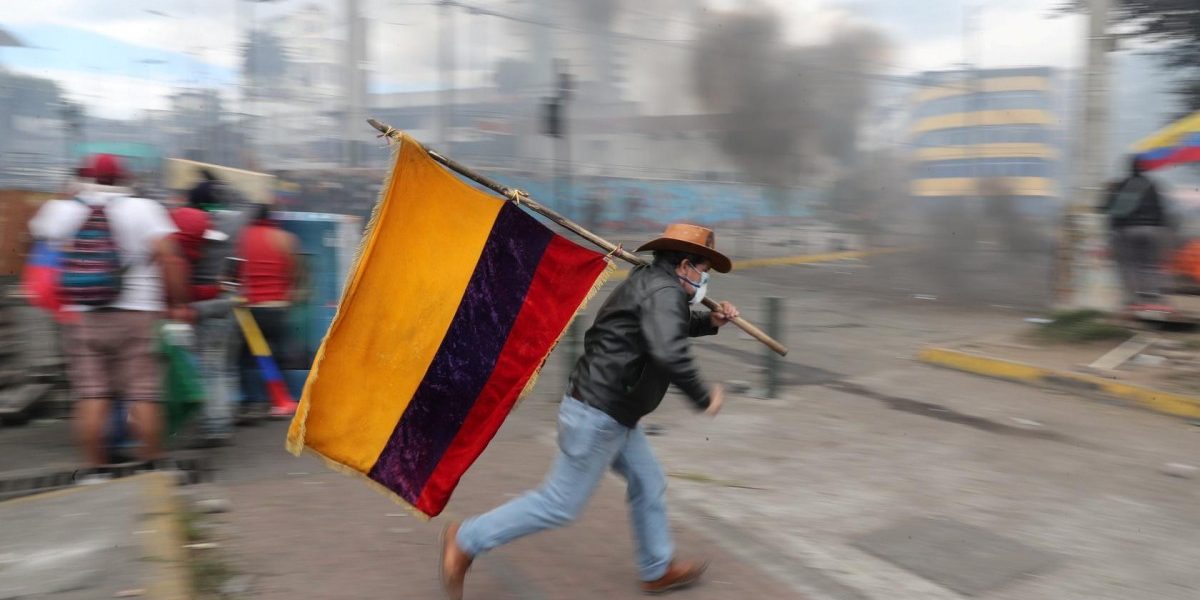 New Delhi: Progressive International, an international group of individuals as well as collectives “connecting, supporting, and mobilising activists around the world”, has issued a statement asking the International Monetary Funds to make sure it meets the demands of the people of Ecuador, and removes austerity demands it had earlier imposed with its latest loan.

In 2019, Ecuador faced intense civil unrest and saw seven deaths, as large numbers of people joined protests against an austerity package backed by the International Monetary Fund (IMF). The government finally decided to withdraw the package.

Tuesday, December 15, is the deadline for the IMF to revise the terms of its newest loan to Ecuador. According to the Progressive International’s Debt Justice Working Group, “the IMF and the Ecuadorian authorities continue to advance budget cuts, salary reductions, and sell-offs in exchange for bail-out funds to the government”.

“The revision offers a critical opportunity for the IMF to reflect on the failures of its austerity agenda, and to respond to rising discontent across the country. We worry, however, that this will be yet another opportunity missed — for which the people of Ecuador will suffer the most,” the statement continues.

The Progressive International statement is drafted and signed by economists from several countries across the world.

Read the full text of the statement below.

In October 2019, the people of Ecuador rose up against the International Monetary Fund and the austerity demands attached to a $4.2 billion loan to the government of Lenín Moreno. Marching through the streets of Quito, demonstrators called to end the brutal cuts imposed as conditions of IMF support. “What the government has done is reward the big banks, the capitalists, and punish poor Ecuadorians,” a trade unionist told Al Jazeera. “Out with the IMF!” said another.

The IMF, however, has stayed. Following a year of deadly unrest, the IMF and the Ecuadorian authorities continue to advance budget cuts, salary reductions, and sell-offs in exchange for bail-out funds to the government. On 15 December, the newest Ecuador programme — a $6.2 billion Extended Fund Facility — will undergo a revision ahead of a fresh disbursement of $2 billion. The revision offers a critical opportunity for the IMF to reflect on the failures of its austerity agenda, and to respond to rising discontent across the country. We worry, however, that this will be yet another opportunity missed — for which the people of Ecuador will suffer the most.

Also read: India’s Political Parties Must Realise Austerity Is No Answer to the COVID-19 Crisis

As the early epicentre of the COVID-19 pandemic in Latin America, Ecuador has already suffered a historic year of poverty, unemployment, and disease. Thousands of lives and millions of livelihoods were lost as COVID-19 spread through the country. The city of Guayaquil became a global symbol of the human costs of the coronavirus, with stories of overwhelmed hospitals and street-side corpses reported widely.

But the tragic outcomes of the COVID-19 pandemic were not incidental. On the contrary, they follow directly from the austerity reforms attached to IMF money. To take one striking example, the IMF bailout resulted in the dismissal of 3,680 public health workers. The impact of these cuts on pandemic preparedness were all too predictable.

The IMF has promised to break with the dogma of austerity in response to these unprecedented conditions. “Spend what you can but keep the receipts,” President Kristalina Georgieva has instructed IMF member-states, giving the green light for major spending increases. “Exceptional times call for exceptional measures.”

In Ecuador, however, there is little evidence of this change of heart. The general objectives of the new Extended Facility, currently under review ahead of the 15 December deadline, appear to incorporate the concerns of Ecuador’s aching communities, calling for greater protection of life and livelihoods during and after the COVID-19 pandemic.

But the IMF’s apparent sensitivity to these struggles is immediately undermined by the agreement’s call for a drastic fiscal adjustment of 5.5% of Ecuador’s GDP until 2025. Our research on the new agreement suggests instead that the IMF remains committed to the very same austerian principles that rocked the country one year ago.

Consider its provisions for Ecuadorian workers. The new agreement calls for the “rationalisation” of wages, adjusting the basic salary to more “competitive” levels. But the call to “rationalise” workers’ wages violates Ecuador’s own Constitutional Article 328, which establishes the obligation that “remuneration will be fair, with a living wage that meets the basic needs of the working person as well as that of his family.” The IMF — and the government of Lenín Moreno — has a legal obligation to respect these articles and ensure that the people of Ecuador can access their constitutional rights to a fair wage.

Consider also the agreement’s changes to Ecuador’s central banking. The IMF is calling for a reform of the Monetary and Financial Code to establish greater “autonomy” for Ecuador’s Central Bank — in short, to disassociate it from the executive branch and pass it into the hands of a Board with the participation of private actors. But this “autonomy” would take away the tools of liquidity management that allow governments to protect the lives and livelihoods of the population. Here again, the ‘good governance’ agenda advanced by the IMF threatens to undermine the democratic accountability — and capacity — of the government on the other end.

Finally, the IMF is obliged by its Articles of Agreement to ensure that there are no significant outflows of capital in the countries that are undergoing its programs. The IMF understands well this is a particular problem for Ecuador, given its dollarised economy. But the IMF program in Ecuador excludes this. Paradoxically, the same day the agreement was approved, the IMF’s Independent Evaluation Office released their capital flows report suggesting that controls should be strengthened to address the problem of dangerous outflows. Will the IMF listen and learn, or look aside once more?

15 December should mark a critical juncture in the IMF’s relationship to the people of Ecuador: a chance for reflection, a fresh start in a new year, an opportunity to deliver on President Georgieva’s new promises of social protection.

But the IMF can only realise this opportunity with a clear and honest review of the impacts of its austerity measures, and a fundamental realignment of its policy agenda to respect the constitutional rights of the Ecuadorian people. Only with careful concerns for the human cost of Ecuador’s capital outflows, fiscal consolidation, and wage ‘rationalisation’ can the IMF make good on the bloody legacy of its program in Ecuador, and ensure that its call for consultation is not simply a dialogue of the deaf.