The Tamrazyan family – two parents and three children, ages 21, 19 and 14 – have been living in the Netherlands for the past nine years after being granted temporary asylum. 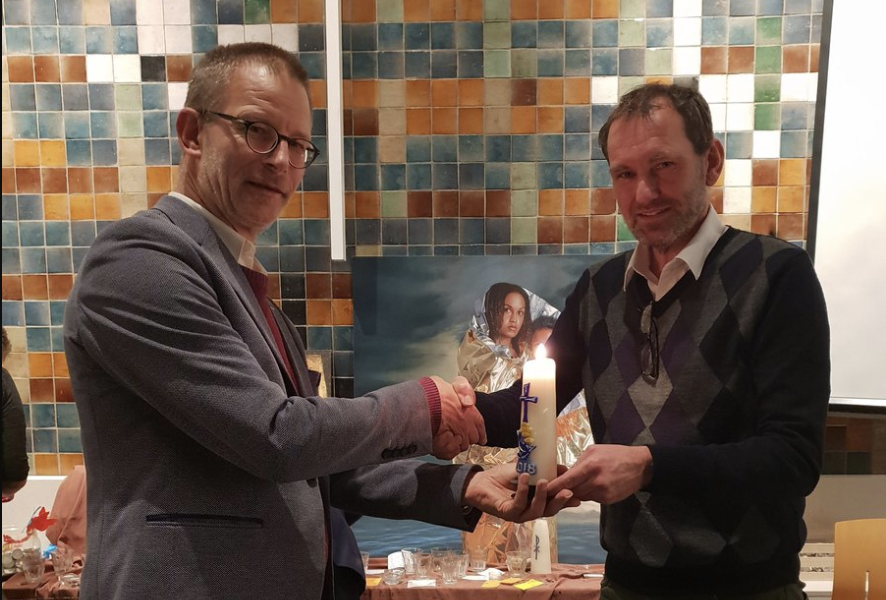 The relay candle being handed over at the church. Credit: Twitter/@hayarpi_3

On Friday, October 26, at 1:30 pm, a pastor in the Bethel Chapel in The Hague started what seemed like a regular church service. Now, after five weeks, the round-the-clock service continues.

The Dutch protestant church has decided to conduct a continuous worship service to protect an Armenian family of five in danger of expulsion from the Netherlands. The church has put its faith in a Dutch law that prevents police officers from entering any places of worship when religious services are being conducted. The plan: as long as the service continues, the family cannot be deported.

Derk Stegeman, pastor and spokesman for the Church Asylum Bethel, told The Wire that it all started as a secretive operation known to only 25 people and the Tamrazyan family. The family had taken refuge at the Bethel Church after fleeing a small church in Katwijk that lacked the resources to conduct a continuous service to keep the immigration agents at bay. The Protestant church at The Hague, after much debate and research on the family, decided to grant them “church asylum”.

The plot was made public on October 26 with a phone call to the mayor after the service began.

Presently, Stegeman estimates that more than 5,000 people all across the Netherlands have volunteered to help the Tamrazyans along with a rotating group of over 500 pastors, ministers and parishioners to carry on round-the-clock service.

“The massive support and participation of pastors and volunteers in the service shows that a great deal of people think that there should be a more humane policy, specially regarding the children,” he said.

The church has also defended its actions in a press release stating that while it respects the court orders, it shouldn’t have to make the difficult choice between “respecting the government and protecting the rights of a child.”

Kinderpardon and the status of children in asylum

The Tamrazyan family – two parents and three children, ages 21, 19 and 14 – have been living in the Netherlands for the past nine years after being granted temporary asylum. Church officials are convinced that the safety of the father is at stake in Armenia due to his political activism. Their asylum status was legally challenged thrice by prosecutors till it was eventually overturned by the court after a five-year proceeding.

Tamrazyans appealed the court orders under Kinderpardon (Children’s Pardon), a Dutch child amnesty law that protects children who have lived in the Netherlands with asylum for more than five years.

Their appeal was denied.

Records show that most appeals under Kinderpardon are denied. Between when the law went into effect in 2013 and May 2016, the government rejected 82% of these applications.

While anti-immigration sentiment rages across Europe, the church’s marathon service is seen as a welcome change in a country embattling white nationalism and right-wing populism. Just last year, the far-right Freedom Party (PVV) came in second in the March 2017 elections. Geert Wilders, the leader of the Freedom Party, had garnered international criticism for his anti-foreigner sentiment and scathing denouncements of Islam.

Earlier this year, two other Armenian children who had lived in the Netherlands for over a decade faced deportation. Howick, 13, and his sister Lily, 12, went into hiding after their mother was deported in 2017, leading to a nationwide manhunt. Ultimately, the children were granted a reprieve following a national outcry.

The Netherlands, like many other European nations, prides itself on its secularism – the separation of church and state. The role of religion has been dwindling in Dutch politics since the 1960s. A vast majority believe that religion should not play any role in policy making, according to the KRO’s 2016 God in the Netherlands study.

Despite this, the Bethel Church’s decision continues to receive “massive support” nationally. What the church did well, emphasised Stegeman, is that it provided the church asylum not as an action, but as a service.

“It is what we do every day. We pray for this government, we pray for this families and we pray for families in similar situations,” he said. “For us, it is about just being a church and organising a service. The only difference is that this one is very long.”

Stegeman states that the aim of the church asylum was to “create time and space for dialogue with the government” and provide some respite to the family by creating rest and safety. Furthermore, he views the wide-scale involvement of the pastors across the country as the rise of a new movement in the church of contextual liturgy and contextual theology in certain situations.

Church officials have declined to comment on how the talks with the government are going. Reverend Axel Wicke of the Bethel Chapel tweeted last week that some talks with politicians, going on behind the curtains, give reason to hope.

“The Tamrazyan family is literally living in a protective house built by prayers and worship,” Wicke added.

We evaluate regularily, with the team and also with the family. So far, we still receive massive support and can fill the rota pretty well. So we keep going, also because there still are many talks going on with politicians behind the curtains, some of which give reason to hope.

The family presently resides in an apartment in the church and risks expulsion if it leaves the premises. Hayarpi Tamrazyan, an econometrics student at the Tilburg University and a poet, has expressed her gratitude and her life in Bethel in her poem ‘In these difficult times‘. Here are some lines:

My words fail
No words, no sentences
Can describe Your love
How thankful am I
How jubilant am I
While I am so tired
Hallelujah Amen

The case of the Tamrazyans raises a very important question for policymakers in the Netherlands and also other countries worldwide dealing with immigration: what happens to the children of the asylum seekers and immigrants who have fully integrated into the new society and have little link to their home country?