Police evacuated lawmakers and struggled for more than three hours after the invasion to clear the Capitol of Trump supporters, who surged through the hallways and rummaged through offices in shocking scenes of chaos and disorder. 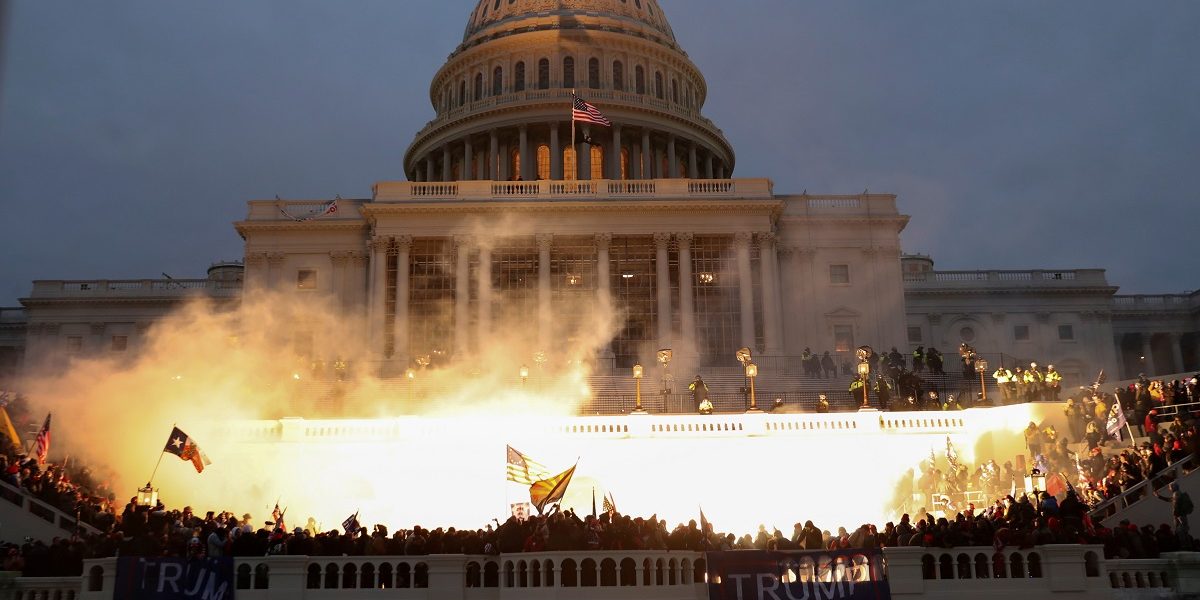 Washington: Hundreds of President Donald Trump’s supporters stormed the US Capitol on Wednesday in a bid to overturn his election defeat, occupying the symbol of American democracy and forcing Congress to suspend a session to certify president-elect Joe Biden’s victory.

Police evacuated lawmakers and struggled for more than three hours after the invasion to clear the Capitol of Trump supporters, who surged through the hallways and rummaged through offices in shocking scenes of chaos and disorder.

One woman died after being shot during the mayhem, Washington police said. The FBI said it had disarmed two suspected explosive devices.

The assault on the Capitol was the culmination of months of divisive and escalating rhetoric around the November 3 election, with Trump repeatedly making false claims that the vote was rigged and urging his supporters to help him overturn his loss.

The chaotic scenes unfolded after Trump, who before the election refused to commit to a peaceful transfer of power if he lost, addressed thousands of supporters near the White House and told them to march on the Capitol to express their anger at the voting process.

He told his supporters to pressure their elected officials to reject the results, urging them “to fight.”

Police deployed tear gas inside the Capitol to disperse the rioters. Washington Metropolitan Police Chief Robert Contee said members of the crowd used chemical irritants to attack police and several had been injured.

“To those who wreaked havoc in our Capitol today – you did not win,” vice president Mike Pence, who presided over the session, said as it resumed. “Let’s get back to work,” he said, drawing applause.

Senate Republican leader Mitch McConnell called the invasion a “failed insurrection” and promised that “we will not bow to lawlessness or intimidation.”

“We are back in our posts. We will discharge our duty under the Constitution, and for our nation. And we are going to do it tonight,” he said. 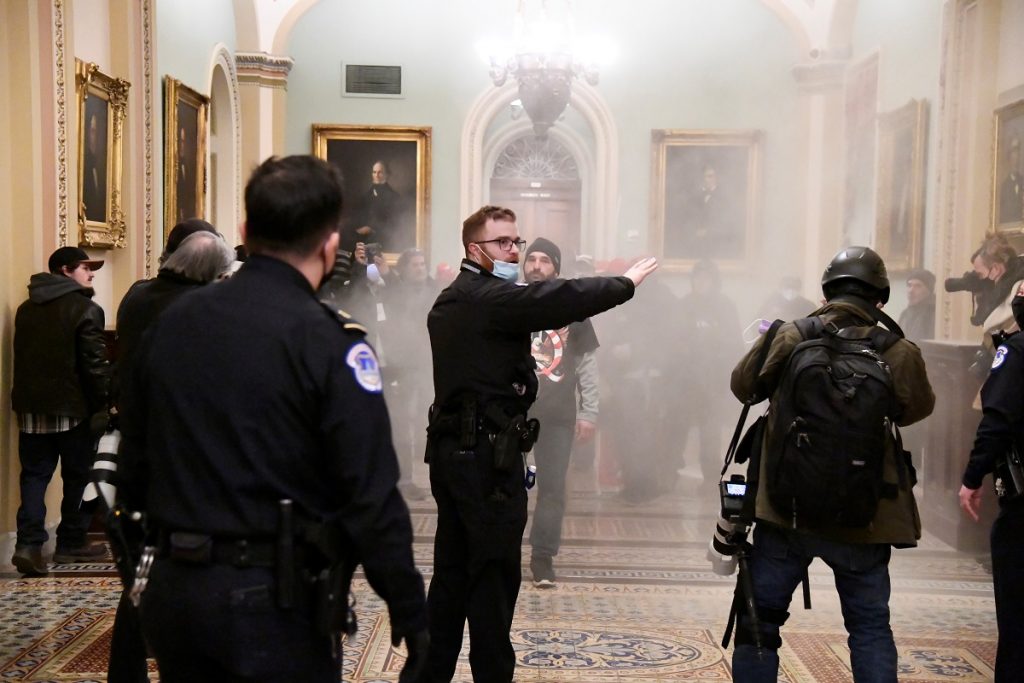 Supporters of President Donald Trump set off a fire extinguisher after breaching security defenses, as police move in on the demonstrate on the second floor of the US Capitol near the entrance to the Senate, in Washington, US, January 6, 2021. Photo: REUTERS/Mike Theiler

Lawmakers were debating a last-ditch effort by pro-Trump lawmakers to challenge the results, which was unlikely to succeed. But some who had planned to object said they would cut their effort short, or perhaps only challenge the results in one state instead of multiple states.

Republican Senator Kelly Loeffler, who lost her re-election bid in one of two Georgia runoffs on Tuesday that secured Democratic control of the Senate, said she had planned to object to Biden’s certification but had changed her mind after the events of the afternoon.

“I cannot now in good conscience object to the certification of these electors,” she said.

“This is how election results are disputed in a banana republic — not our democratic republic. I am appalled by the reckless behavior of some political leaders since the election,” former President George W. Bush, a Republican, said in a statement, without mentioning Trump by name.

It was the most damaging attack on the iconic building since the British army burned it in 1814, according to the US Capitol Historical Society.

Biden, a Democrat who defeated the Republican president in the November election and is due to take office on January 20, said the activity of the protesters “borders on sedition.”

The former vice president said that for demonstrators to storm the Capitol, smash windows, occupy offices, invade Congress and threaten the safety of duly elected officials: “It’s not a protest, it’s insurrection.”

In a video posted to Twitter, Trump repeated his false claims about election fraud but urged the protesters to leave.

“You have to go home now, we have to have peace,” he said, adding: “We love you. You’re very special.”

Twitter Inc later restricted users from retweeting Trump’s video, and Facebook Inc took it down entirely, citing the risk of violence. Twitter said later it had locked the account of Trump for 12 hours over “repeated and severe violations” of the social media platform’s “civic integrity” rules and threatened permanent suspension.

Capitol Police told lawmakers in the House chamber to take gas masks from beneath their seats and ordered them to drop to the floor for their safety. Officers drew their guns as someone tried to enter the House chamber.

Police piled furniture against the doors of the House chamber as protesters tried to break them down, Democratic Representative Jason Crow said on MSNBC.

Election officials of both parties and independent observers have said there was no significant fraud in the November 3 contest, which Biden won by more than 7 million votes in the national popular vote.

Weeks have passed since the states completed certifying that Biden won the election by 306 Electoral College votes to Trump’s 232. Trump’s extraordinary challenges to Biden’s victory have been rejected by courts across the country.

Trump had pressed Pence to throw out election results in states the president narrowly lost, although Pence has no authority to do so.

“Our country has had enough and we will not take it any more,” Trump said at the rally.

Pence said in a statement he could not accept or reject electoral votes unilaterally.

The mayhem stunned world leaders. “Trump and his supporters must accept the decision of American voters at last and stop trampling on democracy,” German foreign minister Heiko Maas said.

Business groups, normally staunch allies of Republicans in Washington, also reacted strongly. The National Association of Manufacturers said Pence should consider invoking a clause in the Constitution that allows a president to be removed from office when he is unable to do his job.

“This is sedition and should be treated as such,” said the group’s president, Jay Timmons.