The Democratic leadership may well prefer the return of a right-wing extremist Trump, than lose ground to the Left in their own party.

Trump's tweets at the squad has triggered a row, with many criticising the assault on the essential identity of America as an open, diverse, multiracial society. Photos: Reuters

President Donald Trump’s racist tweets targeting four progressive Democratic congresswomen – also known as “the Squad”– on the Left of the party have sparked a furious row that some are calling a political civil war over the essential identity of America as an open, diverse, multiracial society.

In other words, the principal analyses and reactions to Trump’s tweets urging the minority elected congresswomen – all of whom are American citizens – to “go back” to the countries they came from, and orchestrating “send her back” chants in regard to Representative Ilhan Omar at a subsequent political rally, have largely focused on the very turf that Trump has carved out and on which the Democratic party bases its political and electoral strategy: identity politics.

….and viciously telling the people of the United States, the greatest and most powerful Nation on earth, how our government is to be run. Why don’t they go back and help fix the totally broken and crime infested places from which they came. Then come back and show us how….

The “birther” president who up to the November 2016 general election maintained that Barack Obama was not American-born is continuing his campaign to redefine American identity as “whites only”.

Yet, the ramifications and understandings of Trump’s embrace of what is variously called “white identity politics”, “white nationalism” or the politics of “white supremacy”, while broadly sound, merely skim the surface of the racial politics, class economics, and state authoritarianism of the Trump phenomenon.

And the matter is rarely, if ever, linked with the fundamental attempt to close down opposition to the populist-authoritarian Mr Trump, and simultaneously deconstruct the administrative-regulatory state while bolstering its coercive agencies and powers.

This is more than a class war too – for its enemies include elements of the liberal media, any dissenting parts of the GOP, the Supreme Court when it differs with the president (as on the census citizenship question), the House of Representatives on funding US military deployments to the southern border, and the Senate when it votes against US arms sales and military assistance to the Saudis’ war on Yemen.

This is a presidency that features in addition a personalist dictatorial president who wishes to run the White House like a semi-criminal enterprise with himself as its autocratic and tyrannical godfather.

Trump’s is a presidency that is praised by openly neo-Nazi groups and seen as an ally and champion. His tweets are an open incitement to racist and political violence against elected representatives, particularly as Trump has falsely claimed that they support al Qaeda and terrorism, and noted how the latter are killing American soldiers.

In the context of the mail bomber last year targeting Democrats, the shootings at mosques and the Pittsburgh synagogue, neo-Nazi violence including the murder of Heather Heyer at Charlottesville, and the coast guard arrested with a cache of weapons and an assassination list of Trump opponents, president Trump is playing with fire. 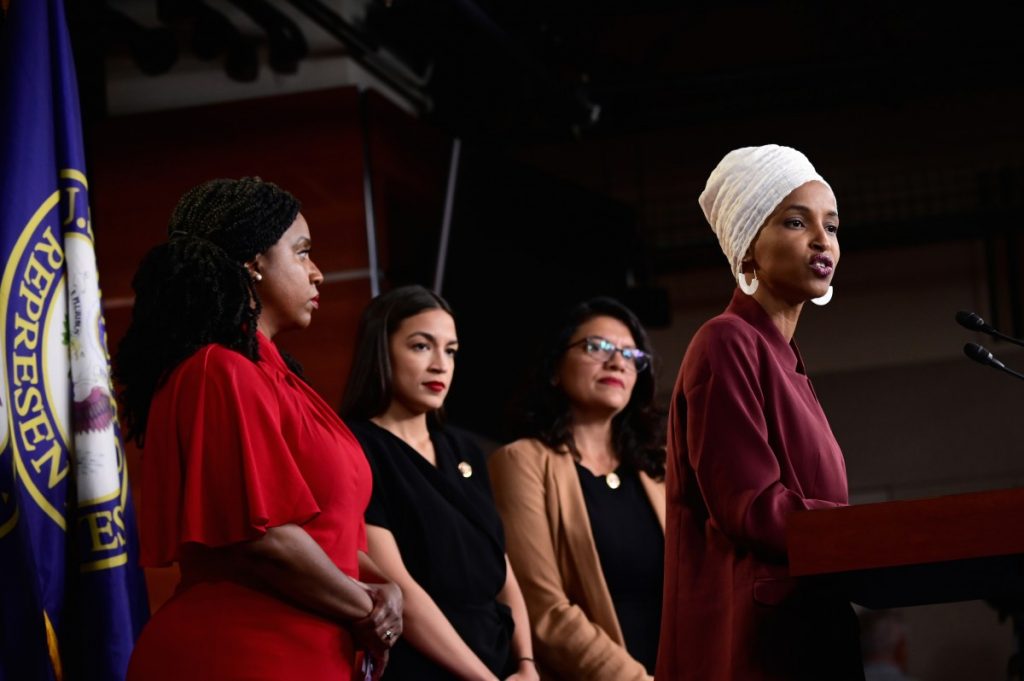 Ocasio-Cortez, Omar, Pressley and Tlaib were targets of the president who rode to victory on a ‘birther’ argument. Photo: Erin Scott via Reuters

This is principally for electoral gain as well as to engineer a radical shift to the Right within the US state and body politic, its coercive agencies, and a more actively mobilised mass of right wing extremists from among his political base.

The blatantly racist attacks, even as parts of the mainstream media continue to debate their degree or otherwise of racism, from the aptly-named “bully pulpit” the US president occupies are the tip of a spear: that spear has already pierced so much of an admittedly rather limited armour of a regulatory state that held corporations to account on environmental, worker and other protections, slashed their taxes and transferred billions into the pockets of America’s wealthiest.

At the other end of the social spectrum, teachers, nurses, manufacturing workers, warehouse staff and drivers for UPS and Amazon, are being denied living wages, pensions, let alone long-term security.

Undocumented workers and immigrant communities live in fear of midnight and dawn raids as Trump threatens to deport a million people, split families and wreck communities. Concentration camps dot the border with Mexico as Trump praises ICE even as official reports document widespread violations of basic human rights and international and US law, and thousands of ICE and CBP staff are exposed and under official investigation for belonging to racist and fascistic extremist Facebook and other groups.

The “Squad” is a very Racist group of troublemakers who are young, inexperienced, and not very smart. They are pulling the once great Democrat Party far left, and were against humanitarian aid at the Border…And are now against ICE and Homeland Security. So bad for our Country!

Trump’s foreign economic strategy is the political counterpart to his domestic strategy: what his former chief strategist Stephen Bannon calls “America-first economic nationalism” is the global counterpart to the domestic politics of exclusion, economics of class power, and state coercion.

The immigrant worker in America, “foreign” workers in their own country, are blamed for job losses to “real” Americans even as “real” Americans – white black, brown and other – are facing the full brunt of government austerity and wage cuts, as the richest reap the dividends of a Wall Street president. In a world already waging a class war, Trump’s tweets may appear crude by are not out of the ordinary. Photo: Reuters/Kevin Lamarque

On this front of a real civil war, the GOP and the Democratic leadership (including its Left elements such as Elizabeth Warren and Bernie Sanders), backed by the trade unions and most of the mainstream media, are united behind the blame China policy, a policy that backs tariffs and blames foreign workers for American workers’ plight.

This is the real war – a class war – that is going on that hardly merits mention let alone analysis in the din of media discussions of Trump’s racist tweets. White worker against minority and immigrant worker at home; American workers against their counterparts overseas. There is a spectre haunting the United States and international ruling elites – that of a rising tide of resistance and support for a radical political change that is happy to see the end of capitalism.

And seen in that larger global context, we may also see why the condemnations of Trump’s tweets ring so hollow if they ring at all: so many other states across the world are run by governments that embrace the very same politics – class war wrapped in the flags of a xenophobic Brexit, coalitions and cozying up with the extreme Right in Germany, in massive resistance from ordinary French people to austerity (that is, class war) as Macron praises the World War II fascist collaborator Marshall Pétain as a war hero, and the US builds concentration camps under a manufactured emergency.

While Trump’s rather obvious and crude racist tweets in the Orwellian world of the current GOP leadership and supporters are declared the opposite, the condemnation and attacks on the so-called Squad of progressive congresswomen as alien because they are socialists is even less widely discussed.

The silence is instructive: it speaks to how safe Trump feels in condemning socialism as alien, foreign and un-American: after all, House leader Nancy Pelosi and the Democratic leadership stands four-square against the leftward drift in the party since the November 2018 mid-terms, not to mention the shocks Senator Bernie Sanders delivered in 2016 when he won over 13 million primary election votes on an avowedly socialist platform. And recall how the DNC engineered his defeat and Clinton’s victory? 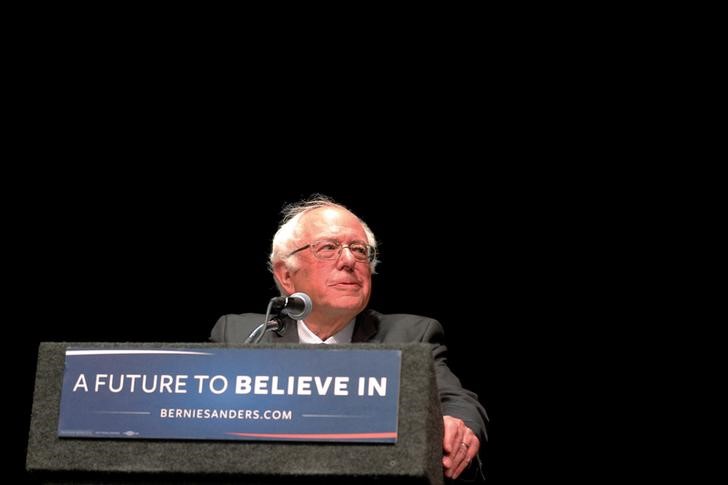 Bernie Sanders’s victory in the 2016 primary was a shock that stunned many. Photo: Reuters/Brian Snyder

This is all to say that the Democratic leadership may well prefer the return of a right-wing extremist Trump, who has already ‘joked’ about not ceding power should he face defeat in 2020, than lose ground to the Left in their own party. After all, the Left threatens Wall Street and corporate power, even if only mildly, and the two main political parties are two branches of one party that supports and is backed by Wall Street.

And president Trump, by ‘tarring’ the Democratic party as the party of foreigners, immigrants and aliens – including the “alien/Venezuelan” ideology of socialism – helps divide that party, drive it further to the Right, galvanise his political base but also, critically, pick up more white votes. It is the politics of fear that he champions, a most potent weapon in American politics.

In his seminal 1969 essay Prejudice And Politics In The American Past And Present, sociologist Seymour Martin Lipset wrote: “The use of ethnic, racial and religious appeals against the supposed threat of minority groups is… as old as the American system itself.

In Lipset’s quote though lie both the tragedy and hope of US politics – its elite politics and political culture can sink, and drag decent people to levels resembling fascism as its checks and balances go absent without leave; but its mass political culture never fully loses and eventually recovers in abundance to produce a New Deal or a Great Society, a civil and workers’ rights movement and leaders like Martin Luther King Junior, producing massive resistance to war and racism.

The problem is that in the interregnum there is political strife, state violence and mass suffering.

Inderjeet Parmar is professor in international politics at City, University of London. He tweets @USEmpire.