When it comes to the normative architecture of the global nuclear order, Donald Trump's unique mix of strategic illiteracy and pugnacious personality is skilfully exploited by the combative National Security Adviser John Bolton who is openly disdainful of hand-wringing peaceniks. 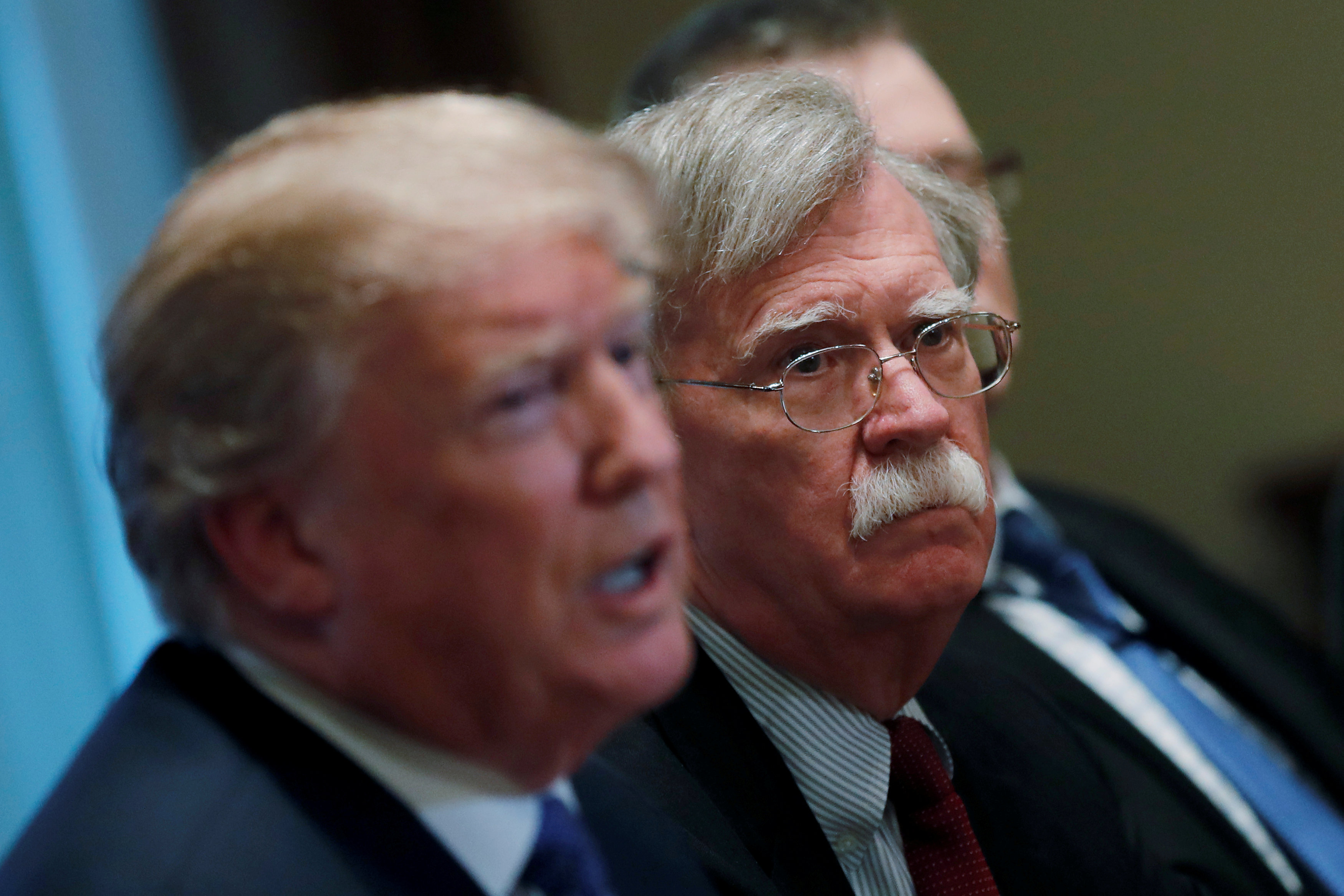 In his impact on world politics, US President Donald Trump is a bull who carries his own china shop wherever he goes. When it comes to the normative architecture of the global nuclear order, his unique mix of strategic illiteracy and pugnacious personality is skilfully exploited by the combative National Security Adviser John Bolton who is openly disdainful of hand-wringing peaceniks.

The election of Trump changed the correlation of forces among the various institutional interests, opinion groupings and issue networks in the US foreign policy establishment. Trump is a New York street brawler who loves a scrap. Dialogue is a foreign language to him. To Bolton, the support of allies is proof of US military weakness, not diplomatic strength and he is yet to meet an arms control agreement he likes. The latest casualty amidst their wreckage of the pillars of the US-crafted global order is the Intermediate-Range Nuclear Forces (INF) Treaty. On October 20, Trump announced his intention to withdraw from it, terminate it and develop weapons prohibited by it.

The INF Treaty crossed the Rubicon as the first disarmament agreement of the nuclear age, contributed to the end of the Cold War and ushered in three decades of strategic stability on the European continent. From the dawn of the nuclear age, governments and peoples of the world have attempted to build a normative architecture and institutional verification machinery to put limits on numbers, roles and countries that can lawfully build and deploy these most destructive, indiscriminate and inhumane weapons. The INF treaty prohibited the development, testing and possession of ground-launched cruise and ballistic missiles from 500 km to 5,500 km range, whether armed with nuclear or conventional warheads.

The INF was signed on December 8, 1987 and entered into force on June 1, 1988. Reagan and Gorbachev noted: “This treaty is historic both for its objective – the complete elimination of an entire class of US and Soviet nuclear arms – and for the innovative character and scope of its verification provisions.” By the Treaty’s implementation deadline of June 1, 1991, they had destroyed almost 2,700 short, medium and intermediate-range missiles, with the Soviet numbers being nearly double the US.

The US-Soviet INF agreement reversed strategic confrontation and reconstructed cooperation in preserving the nuclear peace. With Trump, expectations of responsible US leadership and beneficial US statecraft have dissipated. Even a majority of Americans – 60% in a Washington Post opinion poll – do not trust him to handle his nuclear command authority responsibly. Withdrawal from the INF will feed perceptions of the US – the only country ever to have used atomic weapons in war – as today’s major belligerent power. With the INF dead and New START set to expire in 2021, the world would be left without any limits on the nuclear powers’ nuclear arsenals for the first time since 1972.

The normative anchor of the global nuclear is the Nuclear Non-proliferation Treaty (NPT). Not one nuclear warhead has been destroyed under its auspices. Yet global stockpiles of nuclear weapons have fallen by a dramatic 80% since their Cold War peak in the mid-1980s thanks to unilateral measures and bilateral agreements between the US and the Soviet Union/Russia. The two were the main drivers of the NPT and still hold over 90% of the world’s nuclear weapons.

Since the Ukraine crisis and Russia’s annexation of Crimea in 2014, NATO and Russia have been trapped in an escalation spiral. As NATO placed heavy weaponry in Russia to allay eastern European fears, Russia bolstered its missile brigade in Kaliningrad. NATO undertook a re-evaluation of its nuclear-weapon strategy as a response to the heightened tensions. A major report from a consortium of four think-tanks recommended a broadening and hardening of US nuclear strategy to reinforce the credibility of US extended deterrence. The American Enterprise Institute, a leading neoconservative think tank, has urged the government to generate political and public support for rearmament with cruise missiles. Little wonder that a respected Russian expert, Alexei Arbatov, mused if nuclear arms control had reached its own end of history.

Where previous administrations had tried to trim the different types of nuclear weapons, the Trump Administration’s 2018 Nuclear Posture Review (NPR) promises to introduce new types and widens the circumstances in which US nuclear weapons might be used. Expanding US and Russian nuclear-weapon developments and deployments leads to the normalisation of the discourse of nuclear-weapon use.

The Trump administration has affirmed – in its national security strategy (December 2017), national defence strategy (January 2018) and Nuclear Posture Review (February) – strategic competition with both Russia and China as the central organising principle of US national security policy. The NPR levelled three charges against Russia and China: “They have added new types of nuclear capabilities to their arsenals, increased the salience of nuclear forces in their strategies and plans and engaged in increasingly aggressive behavior.”

Russia and the European theatre

With the INF, US strategic imperatives collide: what is advantageous vis-a-vis Russia in Europe is placing the US at a growing and potentially critical disadvantage vis-a-vis China as the greater strategic rival in the Asia-Pacific. Washington first charged Russia with INF non-compliance in July 2014 and has repeated the allegation every year since then. On October 2, US ambassador to NATO Kay Bailey Hutchison warned Russia that if it did not halt their development, the US would “take out” the INF-illicit missiles.

The US withdrawal from the INF will deepen the strains within the North Atlantic alliance. Germany’s Foreign Minister Sigmar Gabriel warned in December 2017: “We could be facing the immediate danger of another, perhaps even nuclear, arms race.” European objections were a major reason why President Barack Obama did not exit the INF. In the 1980s, responding to the deployment of SS-20 missiles by the Soviet Union, NATO stationed 572 Pershing II and ground-launched cruise missiles in Belgium, Germany, Italy, the Netherlands and the UK but, adopting a “dual-track strategy,” offered to scrap the entire class of missiles if Moscow did the same. The strategy of double zero worked and INF helped to protect the European continent and to stabilise the entire global geopolitical order.

Baltic countries insist that Russia’s violations of the INF demand robust diplomatic and military counter-measures and the UK has lined up firmly behind Washington. But Germany’s Foreign Minister Heiko Maas has urged Washington to consider the consequences of withdrawal for Europe and for the future of nuclear disarmament. According to the EU foreign policy chief Federica Mogherini: “The INF contributed to the end of the cold war and constitutes a pillar of European security architecture.” NATO stands to lose more from an INF collapse. While Russia will be able to move ahead rapidly with the development and deployment of short and medium-range ground-launched nuclear-capable missiles, the US would face difficulty in finding allies prepared to station such missiles on their territory. Would the host countries have a voice or veto on launching them and in choosing targets?

China and the Asia-Pacific

Nuclear relationships have morphed from the Cold War dyads into interlinked nuclear chains. The INF was negotiated to counter the nuclear threat to Europe. The US exit from the INF is at least in part a response to China’s growing challenge to US dominance in the Asia-Pacific. Does it make sense to shred it in order to counter non-nuclear threats from China?

China is not a party to the INF and thus unconstrained by its limits and has invested substantially in a non-nuclear missile-based systems. About 95 percent of its missiles are in the 500km-5,500km range prohibited by the INF. This empowers China to  target US ships and bases from the mainland by relatively inexpensive conventional means.

Without INF restrictions, the US could develop and station ground-launched intermediate range cruise missiles – not necessarily nuclear-armed – in Guam, Japan, South Korea and northern Australia. As well as offering low-cost options to complicate China’s defence preparedness, including military assets located deep inland, this would also free up high-end air and maritime forces for other priority missions requiring over-the-horizon power projection. However, US allies in the Pacific will be as conflicted as NATO allies if asked to host American missiles on their soil.

Thanks to Donald Trump and John Bolton, we shall continue to live in interesting times.