If confirmed by the Senate to replace liberal icon Ruth Bader Ginsburg, Barrett would become the fifth woman ever to serve on the court and would push its conservative majority to a commanding 6-3.

U.S President Donald Trump poses with U.S. Court of Appeals for the Seventh Circuit Judge Amy Coney Barrett and her family at an event to announce her as his nominee to fill the Supreme Court seat left vacant by the death of Justice Ruth Bader Ginsburg, who died on September 18, at the White House in Washington, U.S., September 26, 2020. Photo: Reuters/Carlos Barria

Washington: President Donald Trump on Saturday nominated Amy Coney Barrett to the Supreme Court, and she pledged to become a justice in the mold of the late staunch conservative Antonin Scalia, setting another milestone in Trump’s rightward shift of the top US judicial body.

Trump’s announcement during a flag-festooned White House Rose Garden ceremony – with Barrett, 48, by his side and her seven children on hand – sets off a scramble by Senate Republicans to confirm her as the president has requested before Election Day in 5-1/2 weeks, when he will be seeking a second term in office.

If confirmed by the Senate to replace liberal icon Ruth Bader Ginsburg, who died at age 87 on Sept. 18, Barrett would become the fifth woman ever to serve on the court and would push its conservative majority to a commanding 6-3.

Like Trump’s two other appointees, Neil Gorsuch in 2017 and Brett Kavanaugh in 2018, Barrett is young enough that she could serve for decades in the lifetime job, leaving a lasting conservative imprint. Barrett is the youngest Supreme Court nominee since conservative Clarence Thomas was 43 in 1991.

Scalia, who died in 2016, was one of the most influential conservative justices in recent history. Barrett previously served as a clerk for Scalia on the high court and described him as her mentor, citing his “incalculable influence” on her life.

“His judicial philosophy is mine too: a judge must apply the law as written. Judges are not policymakers,” Barrett said.

On the court, Scalia voted to curb abortion rights, dissented when the court legalized gay marriage – he called it a “judicial putsch” – and backed broad gun rights, among other positions.

With Trump’s fellow Republicans holding a 53-47 Senate majority, confirmation appears certain, although Democrats may try to make it as difficult as possible.

An emboldened Supreme Court conservative majority could shift the United States to the right on hot-button issues by, among other things, curbing abortion rights, expanding religious rights, striking down gun control laws, halting the expansion of LGBT rights, and endorsing new restrictions on voting rights.

Barrett, a devout Roman Catholic who earned her law degree and taught at the University of Notre Dame in Indiana, was appointed by Trump to the Chicago-based 7th US Circuit Court of Appeals in 2017 and is a favourite of religious conservatives, a key Trump voter bloc.

“Today it is my honour to nominate one of our nation’s most brilliant and gifted legal minds to the Supreme Court,” Trump said.

Trump said Barrett would be the first mother of school-age children ever on the court. Along with her lawyer husband, her children, two of whom were adopted from Haiti, were in the audience. 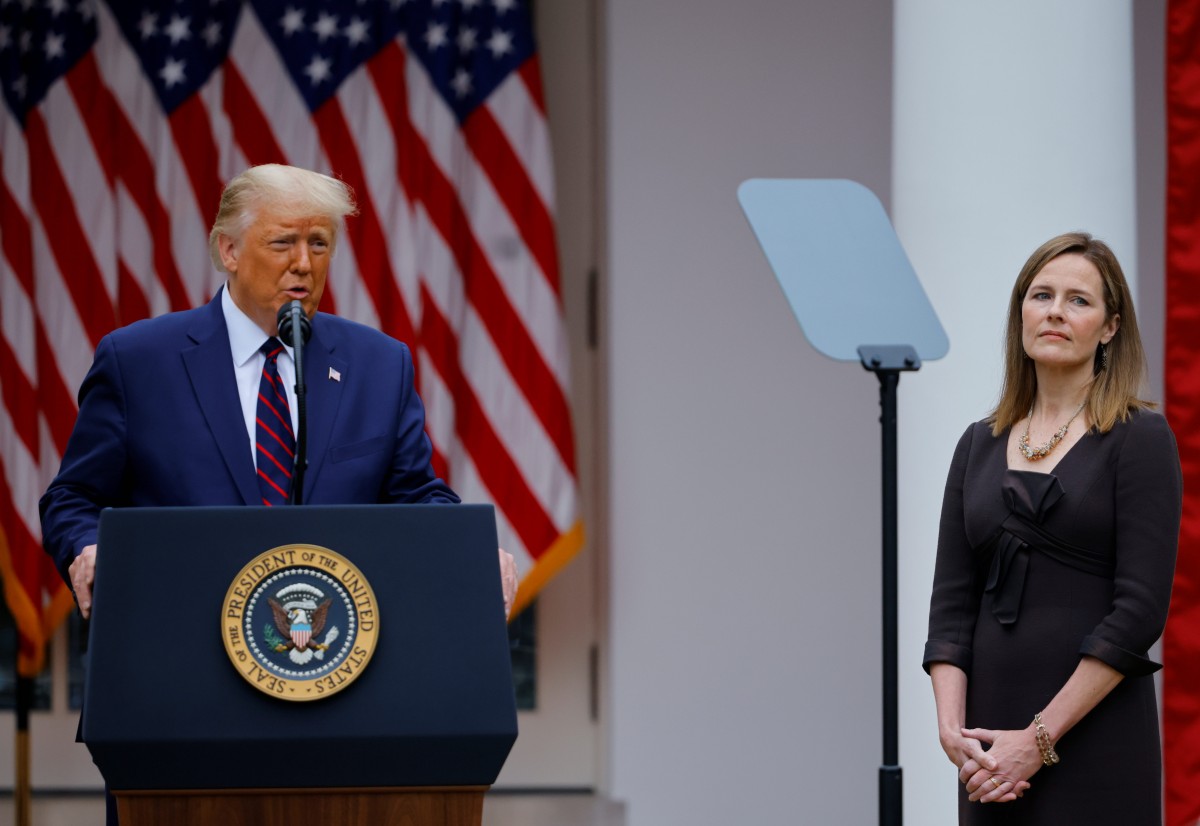 US President Donald Trump holds an event to announce his nominee of US Court of Appeals for the Seventh Circuit Judge Amy Coney Barrett to fill the Supreme Court seat left vacant by the death of Justice Ruth Bader Ginsburg, who died on September 18, at the White House in Washington, US, September 26, 2020. Photo: Reuters/Carlos Barria

Later on Saturday evening, the president drew loud cheers from thousands of supporters at a campaign rally in Middletown, Pennsylvania, when he called Barrett “an extraordinary scholar” who would defend their “God-given rights and freedoms.”

“She should be running for president,” he said, comparing her academic record to that of his Democratic rival Joe Biden.

Barrett also praised Ginsburg, saying the late justice was “a woman of enormous talent and consequence” and mentioned Ginsburg’s long friendship with Scalia.

Senate Majority Leader Mitch McConnell issued a statement praising Barrett and pledging to move forward quickly with the confirmation process. But Biden repeated his call for the appointment to be made by the winner of the Nov. 3 election.

“The Senate should not act on this vacancy until after the American people select their next president and the next Congress,” Biden said.

Democrats are still furious over McConnell’s 2016 refusal to consider President Barack Obama’s Supreme Court nomination of Merrick Garland because it came during an election year. This marks the first time since 1956 that a US president has moved to fill a Supreme Court vacancy so close to an election.

Also read: Why the Battle Over Ruth Bader Ginsburg’s Successor Is So Crucial

Former presidential candidate and senator Bernie Sanders called Republican efforts to push through the nomination “an absolute outrage” and said Americans should fight “as hard as we can to ensure that this nominee is not confirmed.”

Democrats are set to make the fate of the Obamacare healthcare law a key part of the confirmation fight.

Barrett could be on the bench for the court’s Nov. 10 oral arguments in a case in which Trump and fellow Republicans are seeking to invalidate the 2010 law, formally called the Affordable Care Act.

“Justice Ginsburg must be turning over in her grave up in heaven,” top Senate Democrat Chuck Schumer said, “to see that the person they chose seems to be intent on undoing all the things that Ginsburg did.”