Dear D&G, You Can't Sell to the Chinese and Insult Them Too

Chinese social media users have called out a recent 'racist' ad issued by the company and promised to boycott its products. 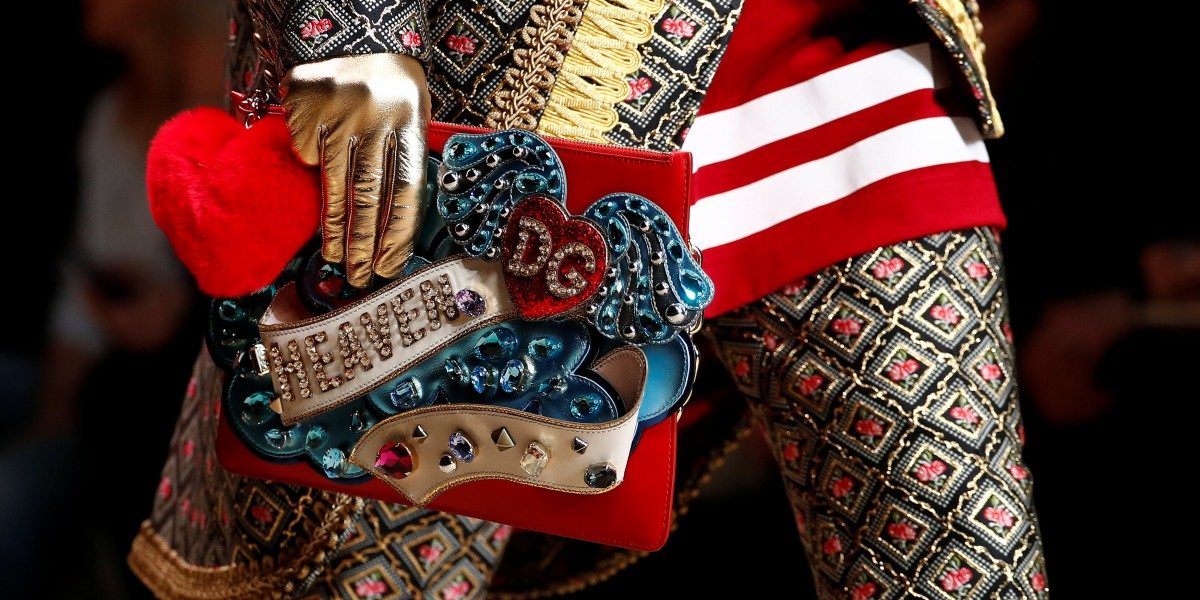 A Dolce and Gabbana model walking at the ramp at Milan Fashion week. Credit: Reuters

The ad starts with a glamorously dressed Chinese woman wearing a glittery red gown and big gold necklace to go with big gold earrings – standard fare from a luxury designer brand like Dolce and Gabbana – but then devolves quickly as the woman tries and fails to eat a giant cannoli with chopsticks.

While it’s unclear what the company wanted to say with the ad, the message Chinese consumers received was pretty clear cut – a tired, old racist trope. And they made their displeasure known immediately, with the Chinese social media platform, Weibo, exploding with calls to boycott the brand.

The ad was pulled, an apology was issued. But for people who keep an eye on the fashion industry, D&G’s gaffe was unsurprising. As the rest of the fashion industry, both couture and high street, moves towards acknowledging popular sentiment about racial and gender inclusivity, D&G regularly finds itself in hot water over problematic comments and products.

For instance, in April 2017 the brand angered Chinese consumers by running a campaign that featured glamorously dressed models in the same frame as poor-looking Chinese people. The fact that China is one of the brand’s – and the luxury products industry’s – biggest markets didn’t stop D&G’s creative team from insisting on painting the “poor East” as a contrast to the style and wealth of the West, i.e. their brand.

This year’s controversy went from bad to worse when screenshots of an Instagram message conversation, allegedly from Stefano Gabbana, emerged which show him ranting about China and its people – with liberal use of the poop emoji.

The man and his brand denied the authenticity of these messages almost immediately, claiming first that Gabanna’s private account had been hacked and then that the brand’s own Instagram had been hacked as well.

My Instagram account has been hacked. My legal office is working on this. I love China and the Chinese Culture. I’m so sorry for what happened.

While this may be true, a lot of consumers and industry watchers are unlikely to believe this version given D&G’s history of tone deaf commentary on cultural topics ranging from calling IVF babies “synthetic” to fat shaming celebrities and accusations of plagiarism. At the very least, there are several people enjoying the unfolding of this debacle.

Like several other luxury brands, D&G was clearly attempting to “look east” by hosting a show in Shanghai and promoting it with ads specifically aimed at Chinese consumers. As post-recession Western markets have shrunk, China and the Middle East have become the largest and most influential consumers of European-made luxury and consequently, their products and marketing and attention goes towards these countries. Brands also woo Chinese consumers by hiring Chinese models to be the face of their brand in the country instead of relying on white Hollywood stars. In 2016, the Economist even wrote about how Asian taste for ornate jewellery has translated into luxury brands designing bigger pieces.

Also read: How the Use of Emoji on Islamophobic Facebook Pages Amplifies Racism

At first glance, there’s nothing new about multinational corporations tweaking their products to suit a particular market’s tastes – Coca-Cola and McDonalds are the enduring examples of such localisation. But fashion, especially luxury fashion, works differently – or did until very recently. While cheap, fast-moving products assume that the “customer is king”, fashion designers are put on pedestals from where they get to dictate what a customer wants, shaping aspirations across the world.

But these tastemakers are not infallible in the way they used to be. Designers can’t control their messaging and image as tightly as they could earlier. Now we get social media accounts in addition to the highly manufactured ad campaigns. This gives us a much more detailed picture of who we are buying from – and makes it easier for us to spot the hypocrisies between revenue-driven decisions (like hiring more Chinese models) and personal biases (like racist tweets).

Nobody wants to feel insulted and humiliated for who they are when they interact with you as a person or with your products. When we buy something – especially something aspirational and not utilitarian – we’re consuming a lot more than the product. It’s mostly about how it makes us feel – and that emotion is muddied when we suspect, or worse know, that the product that we want comes from a person or place who does not value us.

Also read: In Delhi, a People’s Victory in Global Fashion

Moving away from the individual level, we’re living in a moment that’s a peculiar mix of local and global. While we feel globally connected to lots of different people and things across the world, national pride now figures as a large part of our political and personal identities – this is true of India and China especially – and that’s somewhat understandable because for centuries before this academia, art, culture, cuisine and fashion were dominated by ideas that painted this part of the world as inferior. And now there’s space for us to say “Hey, we are not okay with such shallow, one-sided depictions of us.” And that’s why old tropes like grey, rundown visuals of China or references to snake charmers in India elicit such vivid responses from us.

The reality, of course, goes even deeper than the fact that China is one of the biggest consumers of European luxury. In fact, a number of grand old European brands are now partly, and in some cases mostly, owned by Chinese companies.

When D&G releases such ads, the underlying jibe is clear – China remains “backward” and “uncultured” in the brand’s imagination. The farce is also self-evident – D&G apparently thinks its biggest market and wealthiest customers are mired in pedantism and thus incapable of cosmopolitan.

Chinese consumers’ call to boycott shows that if brands treat them as nothing more than a conglomeration of wallets, then they’ll respond in the same way – by closing those wallets.