Devastating Tornadoes Tear Through 6 US States, Killing More Than 70 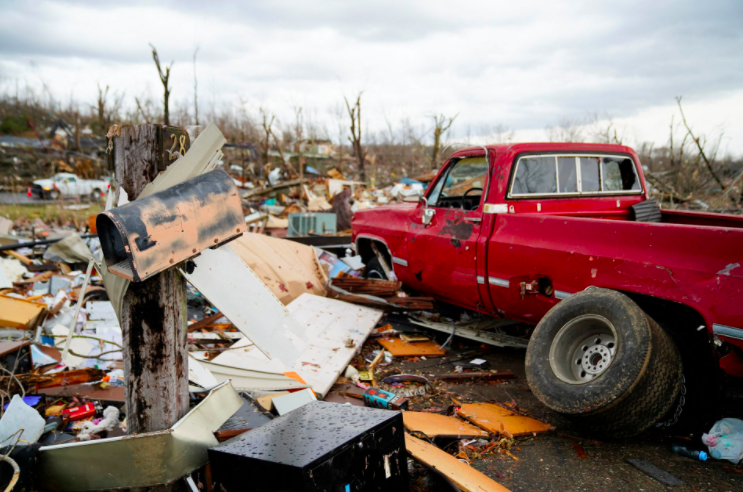 A mailbox stands in front of where a home once stood after a devastating outbreak of tornadoes ripped through several U.S. states in Earlington, Kentucky, U.S. December 11, 2021. Photo: Reuters/Cheney Orr

“The twisters, which could be the worst on record, reduced buildings to rubble and could have killed “over 100 people” just in Kentucky,” said the state’s governor Andy Beshear. A total of 36 deaths have so far been officially confirmed.

Created out of powerful thunderstorms that formed in the US state of Arkansas and Missouri the tornadoes moved to Tennessee and Kentucky wreaking devastating damage on everything in their path.

US President Joe Biden said it was “one of the largest tornado outbreaks in our history.”

He approved an emergency declaration for Kentucky, the White House said.

“It’s a tragedy. And we still don’t know how many lives are lost and the full extent of the damage,” Biden said on television. He promised assistance to all six states impacted by the natural disaster. 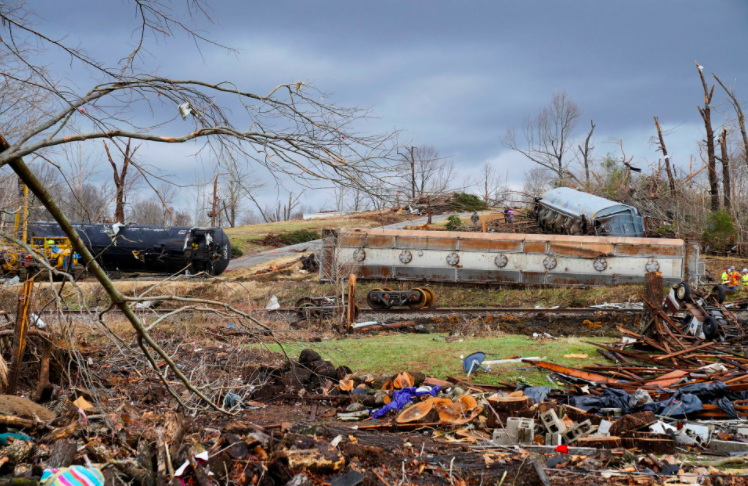 The scene of a train derailment is pictured after a devastating outbreak of tornadoes ripped through several U.S. states in Earlington, Kentucky, U.S. December 11, 2021. Photo: Reuters/Cheney Or.

Biden said the affected states would “have what they need as the search for survivors and damage assessments continue.”

This morning, I was briefed on the devastating tornadoes across the central U.S. To lose a loved one in a storm like this is an unimaginable tragedy. We’re working with Governors to ensure they have what they need as the search for survivors and damage assessments continue.

He said he would be asking the environmental protection agency to investigate whether climate change contributed to the extreme weather.

Biden also questioned tornado warning systems after the US National Weather Service issued its highest level of alert on Friday night for the states of Kentucky, Arkansas, Tennessee, Missouri and Illinois.

“What warning was there? And was it strong enough and was it heeded?” he asked.

‘Unlike anything I have ever seen’

The governor of Kentucky said Saturday that the collection of tornadoes was the most destructive in the state’s history.

“The level of devastation is unlike anything that I have ever seen… We were pretty sure that we would lose over 50 Kentuckians, I’m now certain that that number is north of 70. It may in fact end up exceeding 100 before the day is done,” Beshear told reporters.

According to Beshear, 189 national guard personnel have been deployed to assist with the emergency response.

“This has been one of the toughest nights in Kentucky history and some areas have been hit in ways that is hard to put into words,” he said.

The governor said he had declared a state of emergency. A derailed train is seen amid damage and debris after a devastating outbreak of tornadoes ripped through several U.S. states in Earlington, Kentucky, U.S. December 11, 2021. Photo: Reuters/Cheney Orr

“In Kentucky’s western town of Mayfield, some 110 people were inside a candle factory when the tornado struck, taking down the roof,” Beshear said. “So far, 40 of them have been rescued,” he added.

Mayfield fire chief Jeremy Creason, whose own station was destroyed, said the candle factory was diminished to a “pile of bent metal and steel and machinery” and that responders had to at times “crawl over casualties to get to live victims.”

“Emergency teams were using heavy machinery to remove rubble at the factory,” said Kentucky state trooper Sarah Burgess, adding it could take a day or more.

Burgess said coroners were on the scene to recover bodies, but she did not know how many they had found.

The tornado’s damage can be seen in this aerial view of a neighbourhood in Mayfield, Kentucky

In Edwardsville, Illinois, the tornado killed at least six workers at a warehouse of online retail giant Amazon, reducing a third of the structure to rubble. The roof of the structure was ripped off and one of its walls collapsed.

Rescue workers were rushing through the early hours of Saturday to rescue employees who were working the night shift when the tornado hit.

Amazon founder and executive chairman Jeff Bezos tweeted how he was “heartbroken” at the “tragic” loss of life at the company’s facility.

“All of Edwardsville should know that the Amazon team is committed to supporting them and will be by their side through this crisis,” Bezos added.

The news from Edwardsville is tragic. We’re heartbroken over the loss of our teammates there, and our thoughts and prayers are with their families and loved ones. (1/2)

The Retail, Wholesale and Department Store Union criticised Amazon for keeping the facility open during a weather emergency.

In Arkansas, a twister struck a nursing home in Monette, killing one and seriously injuring five others, while in Missouri two people died and hundreds of homes were flattened.

Tornado could be ‘longest’ on record, says expert

A twister touched down for more than 320 kilometres (200 miles) in Kentucky, “making it one of the longest track violent tornadoes in United States history,” said Victor Genzini, a researcher on extreme weather at Northern Illinois University.

The longest tornado on record tore through Missouri, Illinois for about 355 kilometres (220 miles).

Genzini said this twister, which is rare in December, touched down for as long as 400 kilometres (250 miles). “This is an historic, if not generational event,” Gensini added.

Meanwhile in Tennessee, the severe weather has killed at least three people, the Washington Post quoted a spokesman for the state’s Emergency Management Agency as saying.