According to an official statement, 15 women, one man and one infant were among the dead in the incident. Twenty-five people have been rescued and are being attended by health officials. 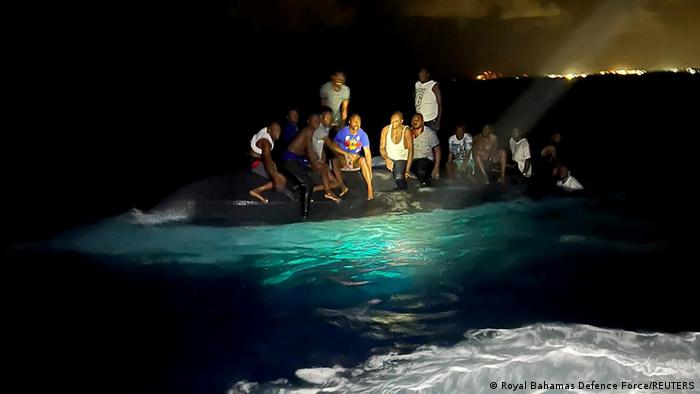 Survivors of a migrant boat that capsized perch on the overturned vessel off the coast of New Providence island, Bahamas July 24, 2022. Royal Bahamas Defence Force/Handout via REUTERS

A boat carrying dozens of Haitian migrants sank off the coast of the Bahamas on Sunday, leaving at least 17 people dead, authorities said.

According to the statement, 15 women, one man and one infant were among the dead in the incident that occurred about seven miles (11.3 kilometers) from New Providence.

Twenty-five people have been rescued and are being attended by health officials, the statement added.

It was not immediately clear how many people were missing.

Police Commissioner Clayton Fernander said nearly 60 people may have been on board.

A multi-agency investigation is underway to determine the full circumstances surrounding a suspected human smuggling operation which has resulted in the deaths of Haitian migrants.

Prime Minister Davis told a press conference that the authorities believe the migrants were on a speedboat heading for Miami, Florida.

“It is believed that the vessel capsized in rough seas,” he said.

A multi-agency probe that involves the Royal Bahamas Police Force and Royal Bahamas Defense Force has begun “to determine the full circumstances surrounding a suspected human smuggling operation which has resulted in” the deaths, the statement from Davis said.

Two people – both from the Bahamas – have been taken into custody over the suspected human smuggling operation, authorities said.

The Bahamas is frequently used by human smugglers as a transit route for the potentially dangerous sea journey for Haitians seeking to reach the United States.

Treacherous sea voyages in rickety boats have become increasingly common in the past year as Haitians flee poverty and growing gang violence.

“This new tragedy saddens the entire nation,” Haitian Prime Minister Ariel Henry said in a tweet after the incident.

“I call once again for national reconciliation to solve the problems that make our brothers, sisters and children flee from our land,” he added.