The one strategy the government has failed to consider is exactly the strategy that could work – working with communities and popular organisations.

This is the third article in a six-part series that is looking at how the COVID-19 pandemic is playing out in the BRICS countries.  Part 1: Introduction | Part 2: Russia

Popular organisations and the government both moved rapidly in mid-March to respond as the coronavirus pandemic hit South Africa. However, the country today has the fifth highest number of COVID-19 cases in the world – over 420,000 on July 24 – and the virus continues to spread, posing a challenge to the fragile, technocratic and neoliberal government on the one hand and social movements on the other.

Governmental shifts in South Africa seem to have taken the opposite trajectory to much of the global pattern, following changes in the former liberation movement, the African National Congress, at the end of 2017. This saw the replacement of the profoundly corrupt, constitution-flouting and incipiently populist regime of Jacob Zuma by the suave former businessman Cyril Ramaphosa, promising to end corruption, restore ‘good governance’ and attract massive foreign investment.

The change was welcomed by many in the middle classes, business and internationally, but Ramaphosa’s position in the ANC remained precarious, with the Zuma network retaining many positions of power. With the coming of the pandemic, Ramaphosa moved decisively to take charge, and the government adopted a science-driven approach, gaining high approval in the media and opposition parties, as well as internationally from the WHO and others. The questions is, will this help him to consolidate his presidential power?

Also Read: Fake News, Hiding Data and Profits: How COVID-19 Spun Out of Control in Brazil

On March 23, the government declared a national state of disaster and implemented one of the toughest lockdowns in the world – all of this when the number of infections was about 400, and deaths not yet in the 20s. The six-week lockdown curbed the spread of infections. The interval was used to build capacity in the healthcare system and ramp up testing (still a challenge) and community screening initiatives. More broadly, however, the lockdown has had a devastating economic impact, with many businesses left reeling, formal sector jobs lost and under threat, informal sector and survivalist activities of the unemployed and poor destroyed, and communities suffering from hunger and deep distress. This has exacerbated the profound economic crisis that South Africa was already facing – the official unemployment rate was 29%, but more realistically was close to 40% prior to the current crisis.

The lifting of the lockdown has been shambolic. In place of the carefully calibrated sequence of steps that were initially promised, government has over a few weeks and under pressure from every conceivable interest group, rushed to open all economic sectors, opening as well activities that are known to accelerate infections such as restaurants and church services, just as the numbers of infected and the dead are rapidly increasing. Government regulations often appear as contradictory, arbitrary and are changed frequently, leading to confusion.

Initially, the government set aside large-scale resources to support businesses and buffer workers from the crisis, as well as to provide relief in the form of supplementary grants. These measures have been belated, in some cases ineffectively implemented, and have hardly been sufficient in the light of the collapse of both formal sector work and informal economies. However, as government revenues have plummeted, it has presented a new austerity budget which is likely to worsen the conditions of the poor and the working class.

Response from the community

Among popular movements and activist networks, several different groupings have emerged, including the COVID-19 Working-Class Campaign, the Cry of the Xcluded (formed in February 2020 before the pandemic landed in South Africa), and the C-19 People’s Coalition. Preceding these formations, however, activist networks, community organisations and trade unions around the country mobilised teams to move from household to household in communities, producing and distributing sanitiser and talking about the necessity for physical distancing. Some demanded the provision of water from municipalities, while others marshalled at the long queues at clinics and local supermarkets, encouraging physical distancing and resolving conflicts. The response from below has been quicker, more agile and more effective than the state’s relief efforts.

At a national level a diverse network of activists came together motivated by three overriding concerns – to strengthen community responses, ensure that government responses did not exacerbate inequality and exclusion, and propose measures that would not only counter the immediate social and economic crisis, but also lay the foundations for a different kind of future. Within a week they had established The C-19 People’s Coalition which by now is supported by 400 movements, NGOs, trade unions, informal sector worker organisations, feminist groups, faith-based organisations, research centres and public health networks – the biggest coalition South Africa has seen since the 1983 anti-apartheid United Democratic Front.

Apart from community organising, the coalition activists have been involved in a wide range of activities – they have assembled information about state violence and trained activist monitors, distributed food parcels with a focus on establishing resilient food systems, supported victims of gender based violence, and challenged government actions on a wide range of fronts.

All these initiatives reveal a vibrant and resourceful set of movements and networks with deep roots in communities and workplaces. Nonetheless, despite the promise of new forms of politics and mobilisation, older forms of conflicts and fault lines have emerged, both between different initiatives and within the People’s Coalition as it has attempted to move from rapid response and mobilisation to organisational consolidation. Conflict over patriarchy, gender and class, NGOs and mass-based organisations, organisational practices, differing political postures and funding have emerged and are aggravated by the need to organise virtually. Time will tell how these play out.

Notwithstanding some ad hoc local collaborations, there has been no systematic engagement with community organisations from a government which, it is increasingly clear, is too distant and disorganised to directly access communities and ameliorate desperation and social distress. Its food parcel efforts and the COVID-19 temporary unemployment grant are hindered by bureaucratic processes to limit beneficiaries to the ‘deserving poor’. Failed promises and corruption have further provoked tensions. The moment of crisis has once again exposed that the ANC and government are no longer capable of imagining an active popular base. 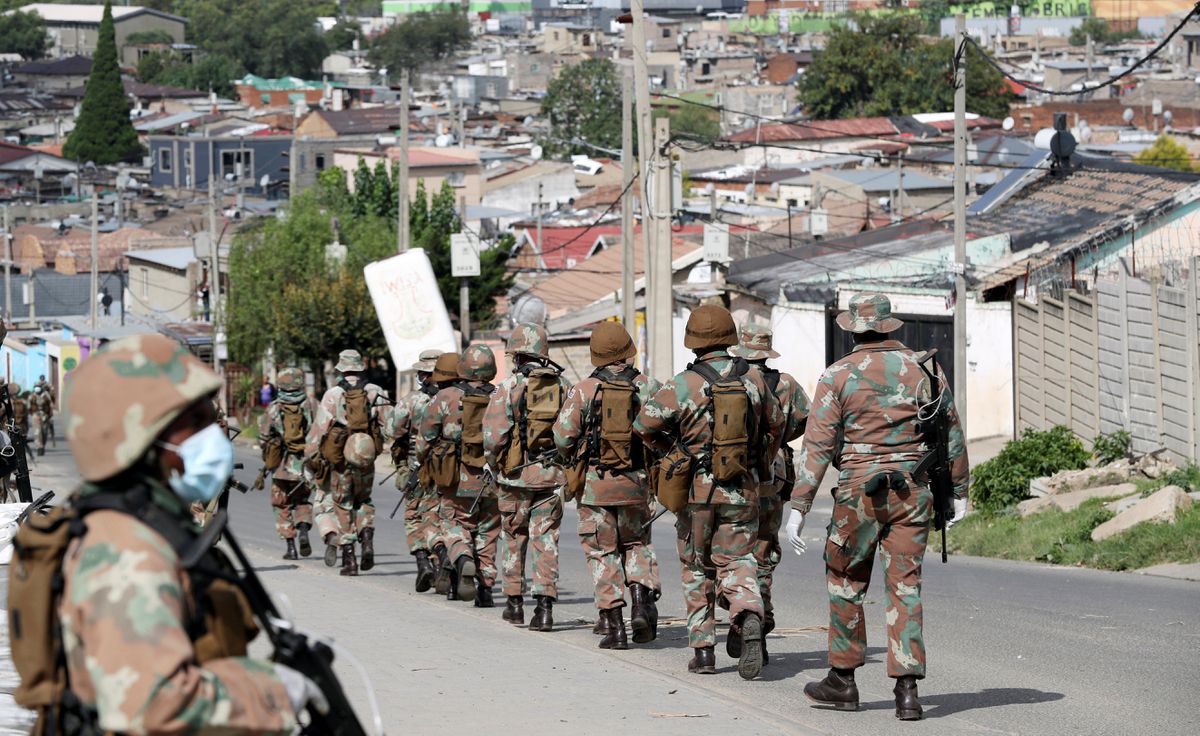 The state’s most visible presence in communities during the weeks of lockdown has been in the form of the police and the army, who have been set the task of enforcing the lockdown in communities where compliance is impossible. Multiple reports, particularly from poor communities, provide a snapshot of the abuse of power, corruption, human rights abuses, humiliating treatment and violent assaults perpetrated by security forces. The independent police watchdog revealed in early May that they were investigating 376 cases that relate to the lockdown period including 10 alleged deaths.

To make matters worse, local governments together with security forces have also carried out illegal evictions. In eThekwini the ANC authorities have continued their vicious vendetta against a highly-organised shack dwellers organisation, Abahlali baseMjondolo, under cover of the lockdown. Daily Maverick reported the words of Patrick Matome, standing in the ruins of his shack south of Johannesburg: ‘We didn’t even know what coronavirus was, but we respected the voice of government and stayed in our shacks. Where must we run to now?’ 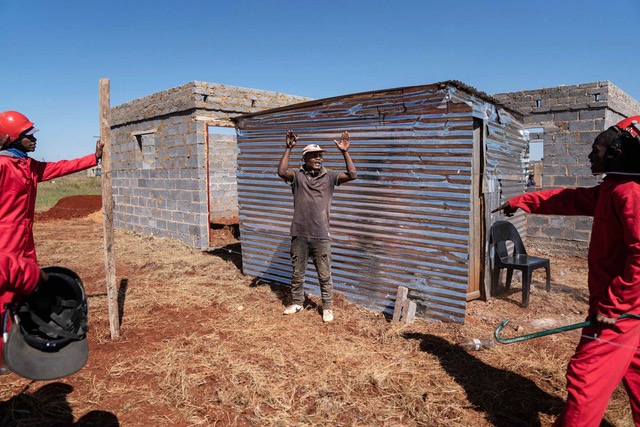 Members of the Red Ant Security Relocation & Eviction Services threaten a resident during a shack settlement eviction carried out by the City of Johannesburg during the lockdown. Photo: James Oatway.

Old and new forms of resistance are emerging. Residents barricade roads, burn tyres, loot shops and clash with police in protest over the failure to distribute food parcels, or mobilise pots and pans banging protests. Health sector trade unions have organised physically-distanced pickets outside hospitals and health workers have directly organised strikes at clinics and hospitals, demanding to be provided with proper equipment to confront the pandemic. At a crowded Cape Town internment camp, homeless people established an organisation, formulated demands and defended human rights monitors against arrest.

Some of these mobilisations during the lockdown have been spontaneous, sparked by deep frustrations, in some cases giving rise to new organisations. Others have been more formally organised within trade union structures or long-standing community organisations. 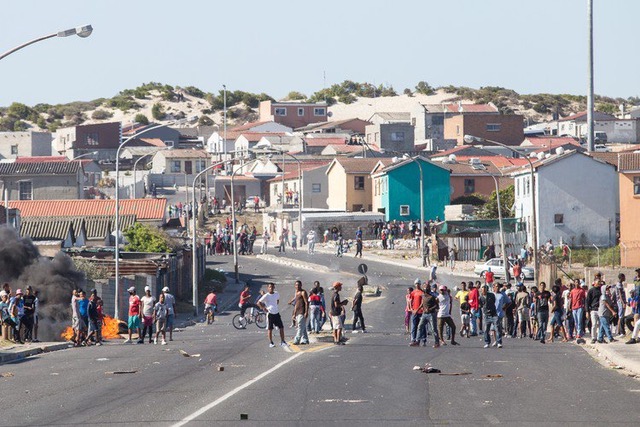 Questions have been posed around whether the strategy of a hard lockdown was the best option for South Africa. Not unexpectedly for a government intent on implementing ‘best practice’, the initial lockdown adopted the model piloted in advanced countries and imposed it on a very different society. Instead of finding a new path adapted to our own circumstances as a middle-income country with a fragile economy, a significant burden of diseases such as HIV/AIDS, TB, diabetes and high blood pressure, and a great proportion of the population living in crowded townships and informal settlements and subsisting off the informal economy, it has now simply opened up and stressed personal responsibility.

The one strategy the government has failed to consider is exactly the strategy that could work in our circumstances – working with communities and popular organisations. The government failed to take seriously the numerous challenges facing poor and working class communities under a lockdown, did not act with the necessary urgency to support them and adopted heavy-handed policing. These failures only produce non-compliance and worsen the effects of the pandemic.

It is not clear whether, or for how long, Ramaphosa and those aligned to him will survive. South Africa will emerge from the pandemic with a further weakened economy, extensive poverty and joblessness, and a high death toll. These will give Ramaphosa’s enemies in the ANC plenty of ammunition. More immediately, economic interventions will need to be made, but the Ramaphosa regime is steeped in neoliberal thinking, and has made it clear that it is unlikely to charter a new economic direction.

This situation confronts the emerging popular movement with difficult strategic choices which will test its ability to mobilise and unify. Defeating coronavirus requires pressurising the government to cooperate with it, and to continue its work to forge progressive interventions, yet the government’s general neoliberal orientation will require deep resistance during and in the aftermath of the pandemic.

Tasneem Essop and Karl von Holdt are both based at the Society Work and Politics Institute, University of the Witwatersrand, Johannesburg, and both are active in the C-19 People’s Coalition.