Coronavirus: How Spain Left Its Elderly to Die

Newly released emails from Madrid’s right-wing government show how authorities instructed care homes not to take elderly coronavirus patients to hospitals. The result was one of Europe’s highest death tolls. Carmen Gonzalez talks to her daughter from a distance on the first day family visits are resumed after three months amid the coronavirus outbreak at the nursing home Centro Casaverde in Navalcarnero, outside Madrid, June 8, 2020. Photo: Reuters/Susana Vera/File Photo

By the time Spain’s prime minister, Pedro Sánchez, declared a state of alarm on March 14, the deadly coronavirus had already begun to infiltrate and rip through many of the nursing homes across the nation’s capital. Like sitting ducks, the highest risk members of society didn’t stand a chance.

Thousands died all alone; in Madrid, several were found lifeless in their beds by soldiers who had been drafted to disinfect the area. Many were carted off to the city’s ice rink, by that time converted into a makeshift morgue. Families were unable to say goodbye.

Those in nursing homes lucky enough to avoid the virus have been unable to step out into the world for over three months. The situation has been likened by many to incarceration. The mental and physical toll has been tremendous.

Yet Madrid’s right-wing regional government seems to have washed its hands of the problem, mudslinging in parliament in order to divert the discussion from this tragic situation. Spaniards are indignant at its failings. But now we must examine why elderly people can be so easily discarded, just because they’re no longer contributing to the economy.

In Spain, whose healthcare system is decentralised across its seventeen autonomous regions, the overall figure for care home deaths alone is said to be close to 20,000 — more than double Germany’s entire death toll.

In an interview with the daily political TV show Los Desayunos, deputy premier Pablo Iglesias has branded the situation “a genuine scandal, if not a crime.” He has also called for the resignation of Isabel Díaz Ayuso, president of the Community of Madrid, for her handling of the crisis.

Madrid, a region that has been governed by the conservative People’s Party (PP) since 1995, accounts for around 32% of the country’s COVID-19 deaths, while representing only 14% of its population.

This was no natural disaster. Years of closures and cuts left the region ill-equipped to face the gravest humanitarian crisis to hit the country since the 1936 civil war.

The name of Ayuso’s People’s Party once again appears richly ironic. This is a force whose backing is heavily skewed toward the richer parts of Spanish society, led by elite figures, many of whom have never themselves needed to enter a public health centre.

The mounting death toll in nursing homes was initially lost in the widespread frenzy and panic that gripped Spain as the infection curve continued to soar. But now the dust has settled — 48 new cases were detected in Spain on Sunday, June 14; a month ago this figure was 849 — and the harrowing truth has emerged.

It has now come to light that the regional health ministry emailed nursing homes across the Madrid region instructing them to prevent patients of a certain condition, or indeed patients over a certain age, from being hospitalised.

Ayuso claims that the original communication was merely a draft that was released “by mistake.”

El País newspaper, however, reports that Carlos Mur de Víu, director general of social and health coordination, sent at least four emails, on March 18, 20, 24, and 25, to the Ministry of Social Policies. These provided the guidance that hospitals and residences followed, ruling out the hospitalisation of disabled and elderly patients with COVID-19.

If one “draft” email may indeed have been released in error, Mur de Víu’s actions clearly show the type of strategy that was deployed. As hospitals edged ever closer to the breaking point, it became a matter of survival of the fittest. The voiceless elderly were an easy sacrifice.

Mur de Víu was removed from his position on May 13.

After less than a year in office, cracks are now emerging in Madrid’s right-wing coalition. This debacle has sparked fierce tension between the PP and the liberal-nationalist Ciudadanos (Citizens), causing a visible split between party lines.

El País details the concern among Ciudadanos officials regarding the legality of refusing to admit care home patients to hospitals from the outset of the coronavirus pandemic.

“People with serious disabilities but with a good life expectancy could be refused, and we would be committing an act of discrimination with serious legal consequences,” said Alberto Reyero (Ciudadanos), head of social policy in Madrid, who sent a series of emails to Enrique Ruíz Escudero (PP), the head of the regional health department. He did not receive a single reply. 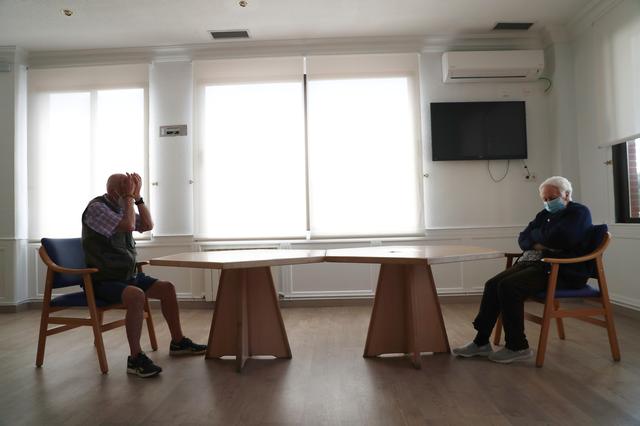 Another communication instructed doctors to avoid sending those with suspected symptoms over the age of eighty or those with specific physical conditions to hospitals. They were, instead, to be treated in their homes. One healthcare worker told El País: “As soon as I got it [the communication], it shook me up inside. It essentially involved sifting through people by age and condition. It didn’t even allow for a chance to rescue those people.”

Albert Valenzuela, owner of a residence in Barcelona, described a similar situation to La Vanguardia: “From the beginning, everything was a total disaster. There was no way to transfer even one sick person to the hospitals.”

186 nursing homes in Spain are currently being invested by the public prosecutor’s office — almost half of them in the Madrid region.

The perils of privatisation

Eoghan Gilmartin previously reported in these pages the devastating effects that privatisation has had on the quality of Spain’s nursing homes. His report details how such private institutions have reduced carers’ pay, fired those who complained of a lack of basic health supplies and unsanitary conditions, and operate with insufficient staff. And that was before a global pandemic struck.

As an editorial piece in the June 10 El País entitled “Indignity” put it:

These residences are not health centers. They do not have the equipment, personnel, nor the facilities to combat such a pandemic. They are centers for accompaniment and care, whose residents, therefore, cannot be denied hospital care, and even less so for reasons that have nothing to do with the strict seriousness of their condition.

In the same Los Desayunos interview, Iglesias remarked: “It is disgraceful that someone can make a business out of the health and well-being of our elderly,” before reminding us of the tendency of these companies to avoid paying taxes in Spain while holding bank accounts in other jurisdictions.

In a cruel twist, showing once again that social inequality often lasts from the cradle to the grave, it has been reported that elderly people who were able to afford private health insurance were not denied hospital treatment. Íñigo Errejón, leader of Más País, tweeted: “This is the freedom of the neoliberals. You’re left to die if you have no money, you’re allowed to save yourself if you pay. Shameless.”

This is a generation of Spaniards raised in the wake of the civil war, hardened from living through an oppressive dictatorship. This was the generation that had to fight for basic women’s rights — and in 2020, they weren’t even given a chance to fight one last battle. Left alone in small rooms, they were shamefully forgotten by society.

Yet Spain is not alone in this regard. In Sweden, whose government continues to stand by its “herd immunity” doctrine, close to 90% of their 4,700 deaths were over seventy years old, half of them living in care homes. In Ireland, the percentage of overall deaths attributed to nursing homes has reached 55%; Belgium also finds itself around the 50% mark.

These people are our grandmothers and grandfathers; they formed a major part of our upbringing, and we failed them when they needed us most. For decades they worked and contributed to the social security system that eventually turned its back on them. They were brushed to one side when the going got tough.

One woman in Barcelona told El País how seeing the condition of her 87-year-old mother after ten days reminded her of the Holocaust. “She was unresponsive to stimuli, abandoned, had a urine infection, dehydration and anemia.”

But apart from Spain’s political and institutional failures, this saga reflects on society as a whole.

In a world that puts money first, even public health care systems abandon those who are unable to work. We need a strong public health system with a firm moral foundation; a system that guarantees it will take care of all human life, rather than abandon people when they’re no longer economically useful.

What kind of a society allows the wellbeing of its loved ones to fall into the hands of private companies, intent on squeezing every last drop of profit from its “assets”? Treating human beings in need of care as if they were customers to be packed onto a low-cost airline, these companies have blood on their hands.

Radical change is needed. We owe it to those we let down.

Brendan Boyle is an Irish writer who has lived in Madrid since 2016, covering Spanish football and current affairs.

This article was published in Jacobin. Read the original here.