The nation's parliamentary commission may hold the president accountable for encouraging political gatherings and religious congregations in the midst of a raging pandemic. Sao Paulo: A year back, when COVID-19 was gathering speed across Brazil, President Jair Messias Bolsonaro was asked by a reporter about the rising graph of deaths. Visibly irritated by the question, the president shouted at the journalist: “So what? I’m sorry? What do you want me to do? I’m Messiah, but I don’t do a miracle,” in a reference to his middle name.

On Tuesday, as Brazil was about to reach the figure of 400,000 deaths due to the pandemic, there was little change in the president’s attitude. “I didn’t make a mistake,” said Bolsonaro, who has never apologised for the massive loss of life. But, during this period, he has made global headlines for calling the pandemic a “little flu” and for urging people to not use masks.

Bolsonaro’s silence continued even as members of both chambers of Congress and Supreme Court judges observed a minute’s silence to “honour the Brazilians killed by COVID-19”. But as Bolsonaro rarely misses a chance to attack an “enemy”, the president targeted the just established parliamentary Commission of Inquiry (CPI), which will probe his government’s response to the pandemic. “We continue to work at full speed, we are not concerned with this CPI,” said Bolsonaro, questioning the probe before launching into a tirade against lockdowns.

Bolsonaro, who has run Brazil with bluff and bluster since 2019, tried to show a defiant face to his supporters on Thursday, but there are indications that the president knows he is in trouble. On Tuesday, the Brazilian senate set up the probe panel, mandated by the Supreme Court, to “investigate the acts of omissions and commissions of the government in dealing with the pandemic”. The probe will definitely weaken Bolsonaro before the 2022 election which he is desperate to win.

While denying the seriousness of the virus since February 2020, Bolsonaro never imagined that he would be held accountable for his actions. As the virus ravaged the country, he fired up his far-right base by calling it a “hoax” and deflected the blame to other institutions – Congress, Supreme Court, governors and media – as they sought a better response from him. Now, with Brazil ranking second only to the US in the number of deaths and standing behind India in the number of cases, the country has run out of patience with Bolsonaro’s crude theatrics. From the streets to social media to corridors of power, grief is turning into anger against the president whose policies have led to Brazil being branded and shunned as a “super-spreader” of the virus. 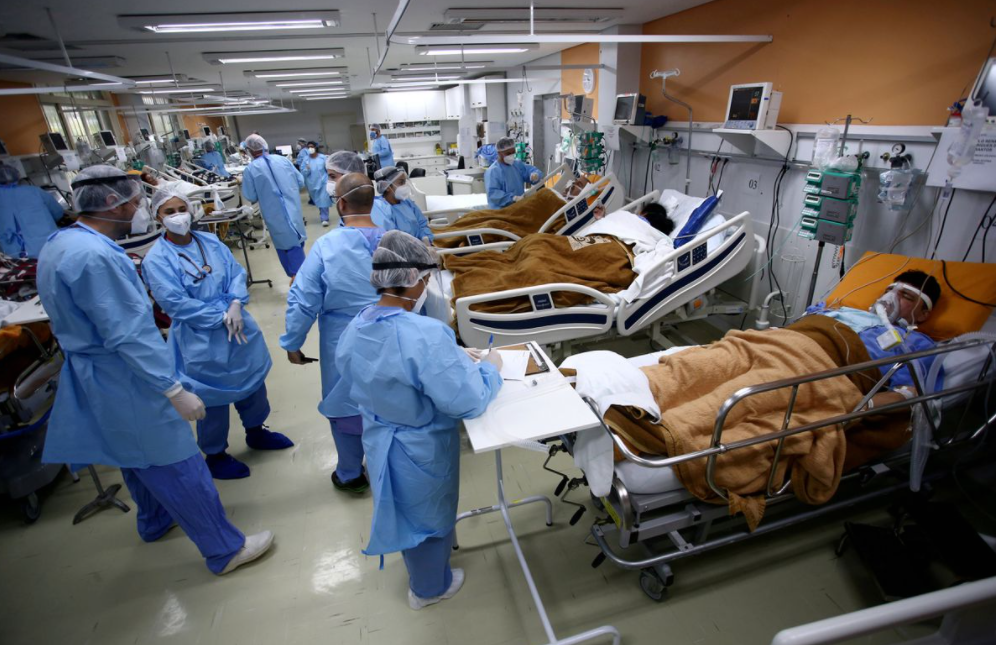 Medical workers take care of patients in the emergency room of the Nossa Senhora da Conceicao hospital that is overcrowding because of the coronavirus outbreak, in Porto Alegre, Brazil, March 11, 2021. Photo: Reuters/Diego Vara

The fury against the president was clearly visible on Tuesday when the CPI rapporteur, senator Renan Calheiros, a veteran of Brazilian politics, stood up in the Senate to address the commission. Saying that “crimes against humanity never go away and are transnational in nature”, the senator cited examples of Slobodan Milosevic of Yugoslavia and the Chilean dictator Augusto Pinochet as he spelt out the scope of the probe.

“This will be the commission for the celebration of life, the affirmation of knowledge and, above all, the sacredness of the truth against the macabre cult of death and against hatred. Brazilians have the right to return to live in peace,” said senator Calheiros. “Our crusade will be against the death agenda. To oppose social chaos, hunger, institutional debacle, slaughter, economic ruin and denialism is not an ideological or philosophical predilection, it is a democratic, moral and human obligation.”

Such searing remarks by the senator not only found resonance across the country, they also struck fear into the heart of the government which has everything to lose as the commission summons top ministers and officials and pores over state documents to examine the government’s handling of the crisis. On Wednesday, the commission decided to summon Luiz Mandetta and Nelson Teich, two former health ministers who were fired by Bolsonaro for not following his anti-science instructions; General Eduardo Pazuello, the third minister on whose watch Brazil turned into the epicentre of the pandemic; and Marcelo Queiroga, the fourth and current health minister who is yet to settle in his position.

The testimonies by these men, starting next week, can blow the lid off the Brazilian government’s actions which have wrecked this country. The government knows what is coming. So, the day the Supreme Court asked the Senate chairman to begin a probe, the presidential palace tried to smear it. Then the president’s team tried to disrupt the setting up of the commission. When nothing worked and the Senate packed the panel mostly with politicians who have been critical of the government, the president’s team panicked. Though the CPI will pursue six lines of investigation, covering “actions and structures to fight the pandemic to healthcare collapse in the Amazon to federal resources”, Bolsonaro knows they are coming for everything. Fearing the worst, the government almost signed on a guilty plea as it prepared a list of 23 possible charges against it as it asked different ministries to gather information for preparing its defence.

The list of presumed charges, which got leaked to the media this week, reads like the rap sheet of a regime which has deliberately exposed its people to a virus. The government may have a tough time preparing its defence in front of the commission.

Topping the list of accusations, in the government’s own imagination, is the charge that it was “negligent in the process of acquiring the CoronaVac vaccine”. Made by the Butantan Institute of Sao Paulo in partnership with the Chinese firm Sinovac, the vaccine became a bone of contention between the president and state governor Joao Doria. As Doria tried to launch the vaccine in Brazil, the president publicly doubted its efficacy. Today, CoronaVac is practically the only vaccine that Brazil has, with 84% of those inoculated so far receiving a jab of this Chinese-developed serum. The rollout of the other vaccine from Oxford-AstraZeneca has been slow. The Bolsonaro government had also rejected a deal for 70 million doses of the Pfizer vaccine in 2020. Without CoronaVac, Brazil’s vaccination plan would not have taken off at all. On the vaccine front, Bolsonaro is on slippery turf.

The second accusation on the government’s own list is that it “downplayed the severity of the pandemic and discredited preventive measures”. On this front, Bolsonaro may have no defend at all he is on record – on numerous occasions – saying that COVID-19 was “a little flu”. He has also hit headlines for saying that Brazil should stop “being a country of sissies” and “stop whining”, while referring to protests against his government’s handling of the pandemic. It will take some audacity by the government to deny these charges at the commission.

But one accusation that is indefensible for Bolsonaro is that he promoted hydroxychloroquine (HCQ) as “preventive treatment”, without any scientific evidence. Sure to be one of the hottest issues at the Senate hearing, it will be interesting to see how the president, who has been filmed promoting the controversial drug a number of times, denies this charge. What can also land Bolsonaro in the soup is the allegation that he had pressured Mandetta and Teich, two former ministers, to promote the use of HCQ. As both the men, upset with Bolsonaro, will be testifying at the probe, a lot of dirt about the drug is expected to come out.

Another serious charge, certain to be raised by the CPI, that features in the government’s list is about the accusation that the regime “disseminated fake news” about the pandemic through the so-called “hate office”, a clutch of Bolsonaro supporters, including his sons and ministers, who amplify messages through social media. As the “hate office” is itself facing a separate senate probe, and several posts by Bolsonaro himself have been taken down by social media networks, the government may have little defence on this matter as well. 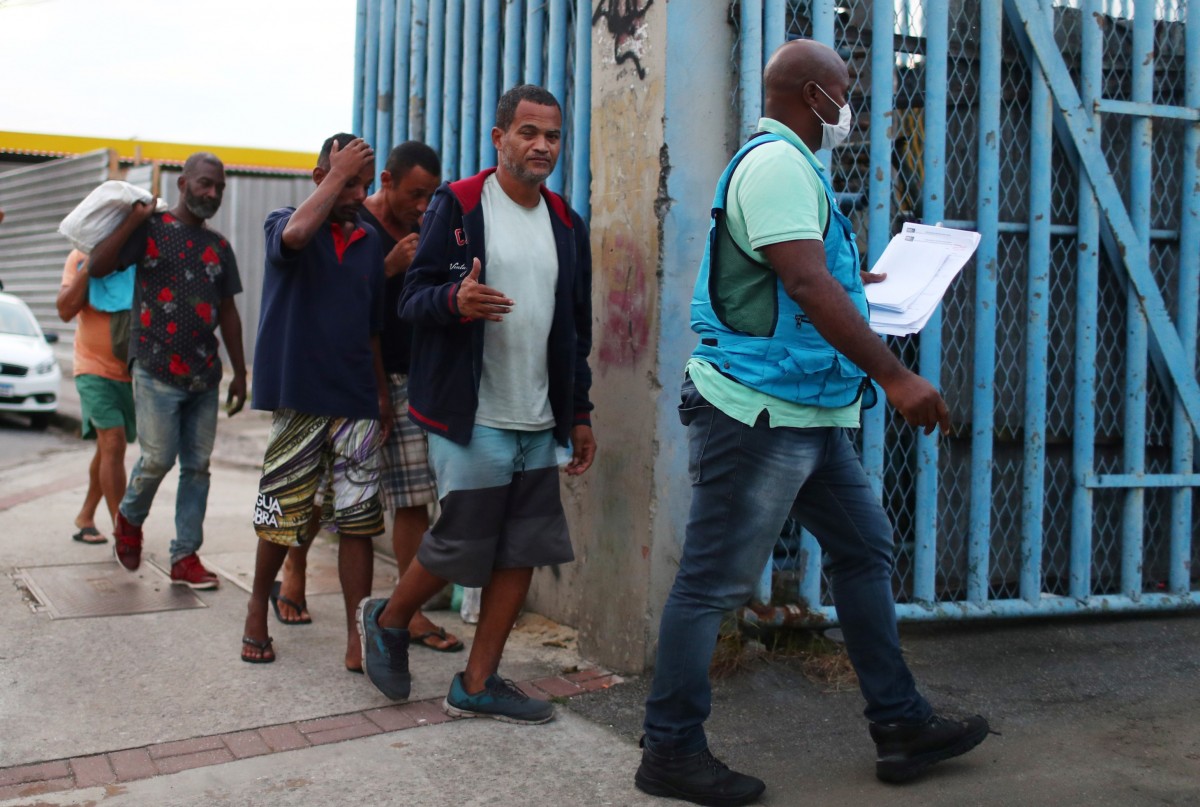 A group of homeless people entering the iconic Sambadrome that will function as a shelter, while the outbreak of coronavirus disease (COVID-19) continues in Rio de Janeiro, Brazil March 30, 2020. Photo: Reuters/Pilar Olivares

Eye on supporters’ base before nation

Though India is now the new epicentre of the pandemic and getting all the media focus, Brazil is still badly struggling with the virus. With its ICUs full, hospitals running short on essential supplies such as sedatives, medicines for intubation and oxygen, Brazil has become an example of how the lack of planning can bring a country to its knees.

With 82,000 deaths in April, the highest number since March 2020, it seems the country’s healthcare system has buckled under the onslaught of a deadly virus and its locally mutated variants. Many blame the president’s behaviour, with an eye on his narrow base of supporters, for the catastrophe. In the government’s own list of assumed charges, two accusations have been left out. First is the charge that Bolsonaro has promoted big gatherings of his supporters throughout the pandemic. It is hardly a secret. The president has been caught on camera meetings, almost on a weekly basis, and addressing the crowds of his supporters. The president, who has declared a few times that the pandemic was about to get over, has used these meetings to push the narrative that everything was “normal” – a story that works with his far-right backers.

Another charge missing from the list is equally alarming. Eager to mobilise his base of evangelical Christians, who voted for him in hordes in 2018, Bolsonaro defended keeping the churches open in the midst of the pandemic. He even signed a decree classifying religious activities as “essential services”. On April 10, after the Supreme Court authorised the governors and mayors to restrict face-to-face gatherings in Catholic churches and evangelical temples, Bolsonaro unloaded on the court. “I regret the superpowers that the Supreme Court gave to governors and mayors to close even rooms, churches, of religious services. It is absurd of absurdities,” said Bolsonaro, despite the serious threat of spread of virus in religious gatherings.

The Senate probe may pin the president down on his promotion of political gatherings and religious congregations amid the pandemic. These are also two charges which Bolsonaro can’t – and won’t – deny or apologise for as they are fundamental to his far-right politics. But as they are the most visible examples of his reckless behaviour, they are in the crosshairs of the Senate probe. On Thursday, as some government institutions expressed concerns over being targeted by the parliamentary probe, senator Calheiros made clear what – or who – the commission was looking for. “Only the allies of the virus should be concerned. Whoever was not an ally of the virus should not have any concerns,” said the rapporteur of the probe that can shake this country’s politics.

In a country full of grief, anger and desperation, few have any doubt who is the main ally of the virus.