Some of Erdogan's supporters, who have backed him over the past decade, are growing disillusioned by the burgeoning cult of personality around him. 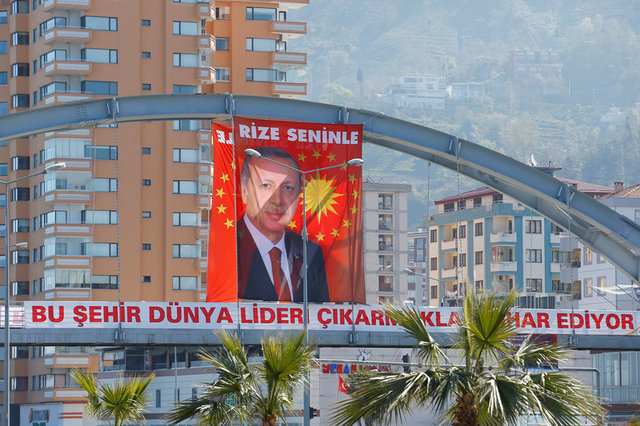 A huge portrait of Turkish President Tayyip Erdogan is seen above a banner that reads, "This city is proud of raising a world leader" in Rize on the Black Sea coast, Turkey, April 5, 2017. Letters on the portrait read "Rize is with you". Picture taken April 5, 2017. Credit: Reuters/Umit Bektas

High-rise apartment blocks have sprung up in a region long dependent on farming and fishing, and construction is about to start on Rize’s first airport, the sort of projects Erdogan and his supporters hope will help win him a referendum on Sunday on constitutional changes that would boost his powers.

Viewed with deepening suspicion by liberal Turks and some Western allies, who fear his Islamist ideals and authoritarian leadership are eroding Turkey’s secularism and democracy, here Erdogan is seen as a hero of the pious, patriotic, working man. 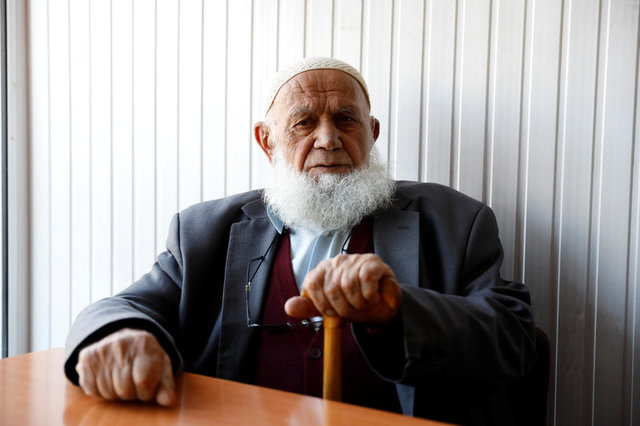 Ali Mutlu, uncle of Erdogan, talks during an interview with Reuters in Guneysu, a small town in province of Rize on the Black Sea coast, Turkey, April 4, 2017. Picture taken April 4, 2017. Credit: Reuters/Umit Bektas

“He wasn’t one of these typical boys looking for fun and trouble,” Erdogan’s uncle, Ali Mutlu, 84, told Reuters in the town of Guneysu, where the president spent several summers at his family home as a teenager.

“His father didn’t have money. He couldn’t offer much to his son financially. Tayyip did it all himself. He earned it,” said Mutlu, who is treated with great respect by locals, some of whom stopped to kiss his hand as he sat chatting in a tea shop.

But Erdogan – Turkey’s most powerful leader since Mustafa Kemal Ataturk founded the modern secular republic almost a century ago – is also its most divisive.

Polls show a close race, putting the “yes” vote slightly ahead, but with nearly half the country rejecting changes that would replace Turkey’s parliamentary system with the executive presidency Erdogan says is needed to give the country strength.

Even around Rize, there are pockets of dissent among conservative Turks who, while sharing the ideals of Erdogan’s ruling AK Party (AKP), are uncomfortable with the powers being amassed in one individual’s hands.

A lone “no” banner flutters from an overpass near Guneysu, where the AKP won almost 90% of the vote at the last national election in November 2015.

“Why would I vote Yes? I’m not a sheep. There’s a republic, there’s our constitution. Why are we throwing all this away?” said Ibrahim Ceylan, a waiter at a nearby fish restaurant.

“I just don’t understand what more authority the president wants that he doesn’t already have.”

Some Turks are more fearful about breaking ranks with their friends and neighbours and admitting they would vote against Erdogan. Pollsters acknowledge there may be a hidden “no” vote whose numbers are hard to assess.

Murat Gezici, whose Gezici polling company put support for a “yes” vote at 53% in its latest research from April 1-2, estimated that around 13% of traditional AKP voters were either undecided or in the “no” camp. 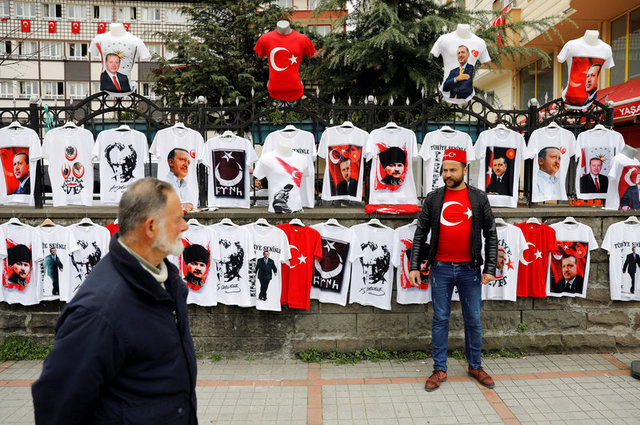 The son of a poor sea captain, Erdogan grew up in the tough backstreets of Istanbul’s working-class Kasimpasa district. He portrays himself as a champion of conservative, pious Turks downtrodden for decades by a secular elite.

Turkey’s strong economic growth during his first decade in power as prime minister from 2002 was the cornerstone of successive electoral victories for the AKP.

“Before Erdogan, there were one or two cars in the entire district. Now that’s how many every household has,” said tea shop owner Mustafa Okul, 65, who remembers Erdogan as a teenager roaming Guneysu streets. He dismissed talk of slowing growth.

But some of those who have backed him over the past decade are growing disillusioned by the burgeoning cult of personality around a leader who, in the wake of last July’s failed coup, has overseen purges in which tens of thousands of civil servants have been dismissed or detained.

Writer and commentator Rusen Cakir, an expert in Islamist political movements in Turkey, said such covert dissenters within the AKP who believe Erdogan has walked back from some of the political and economic reforms of his early years could be key in the April 16 vote.

“Right now there are serious contradictions between the political perspective and vision of Erdogan and the people who carried the AKP movement to where it is today,” he said in a recent broadcast on his internet-based Medyascope TV.

As in Rize, 1,000 km to the east, there is scarcely a “No” banner to be seen in Istanbul’s Kasimpasa. But under the “Yes” flags stretched across narrow back streets buzzing with debate, not all are convinced.

“I have my doubts,” said Hakan Ovali, 25, who works at a jeweller shop said.

“Lots of good has been done but the rich got richer and the poor got poorer. Business has evaporated here. That has created anger and heart break,” he said.

“I think you’ll see the reflection of that on Sunday.”