Community guard groups nurture and cultivate practices of popular and ancestral power inherited from centuries ago and organise community members around the defence of their respective territories and spaces. 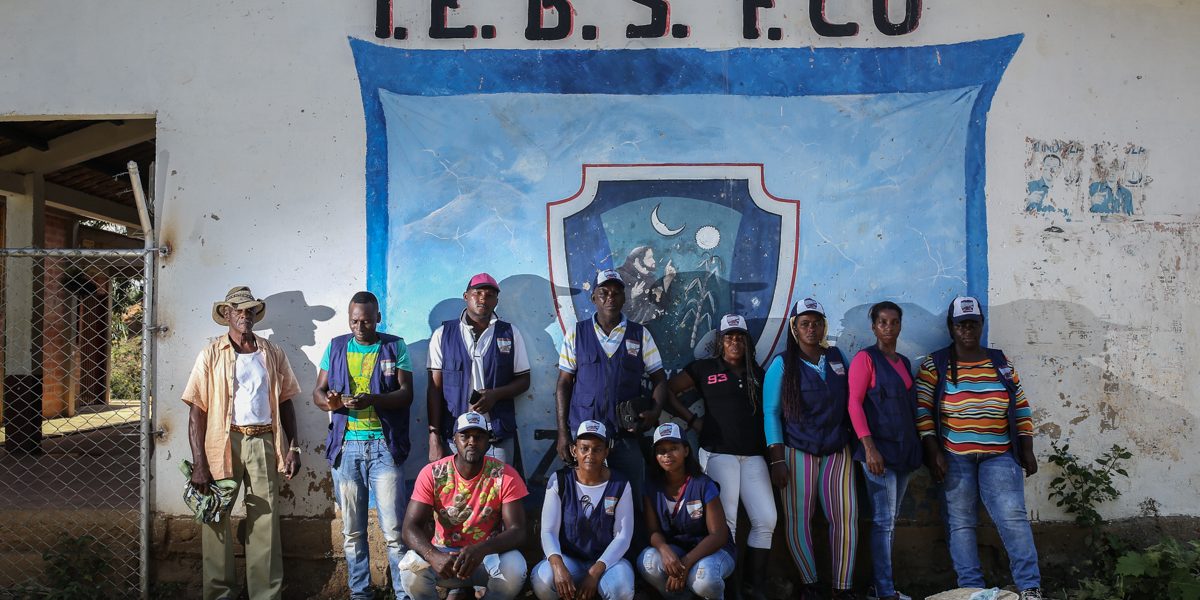 World
14/Oct/2021
An interview with the guard leaders of the Peasant, Cimarrona and Indigenous communities about the processes they have implemented since the beginning of the National Strike in Colombia. For them, self-justice goes beyond exercising authority; it means protecting their territory and the lives of those who inhabit their lands.

The National Popular Assembly (NPA) that took place between July 17–19 at the University of Valle, in Cali, was systematically targeted and sabotaged by public forces. But, the intervention of the Cimarrona, Indigenous and farmer community guards and the front-line protesters guaranteed a safe and peaceful space for the meeting.

“Police officers know how to treat others as police officers, a guerrilla as a guerrilla, and the paramilitary as the paramilitary,” said Manuel Correa, “(…) they each have their own ideology, but they are far removed from the cosmovision of the black people.” Correa is a community leader in the municipality of Riosucio, Bajo Atrato (Chocó); he is part of the Asociación de Consejos Comunitarios y Organizaciones del Bajo Atrato (Association of Community Councils and Organisations of Bajo Atrato) – Ascoba – and is also the second major of the Cimarrona Guard for this region.

For Manuel, taking on the role of community guard has been an exercise of popular power, one that helps maintain a close relationship to black peoples’ ancestral knowledge. Many by-laws and legal provisions have been introduced to protect the autonomy of collective territories, such as those in Decree 1745 of 1995, as well as the Peace Agreement and the Ethnic Chapter, but the reality is different for those who live in these environments of constant corruption, dispossession of lands and human rights violations.

“They see the Guard as a thorn in their side because it is also an internal and external control. The Guard will not solve all problems, but it can assign tasks and expose when someone cheats the community,” says Manuel.

In a place as nuanced as Chocó, where different legal and illegal armed groups are present, being part of the Cimarrona Guard is a risky task that exposes them to assaults, threats and assassinations. Despite the danger, they say they gather strength every day to consolidate a project that has a historical resistance at its core.

These community practices of popular power have strengthened since August 2013 when, for the first time, over seven thousand voices from different territories held the First National Congress of the Black, Afro-Colombian, Raizal and Palenquero Peoples, in Quibdó (Chocó). This is where the communities consolidated many of the mandates with which they seek the protection of watersheds, land, animals, seeds, ancestral medicine and cultural practices.

“Who are we? Peasant Guard!

What do we defend? Life and land!”

The resistance and organisation of the Peasant Guard derived from the structural needs of their own communities, impacted by different levels of violence.

“We know that oppressive governments have never considered peasant needs. In our territories there are peasants who are 12 hours away from main roads, there are no trails, nothing at all. In the department of Cesar only 1% of the peasant population can go to university, we have no health care (…),” assures David Donado, member of the Movimiento de Trabajadores y Trabajadoras Campesinas (Movement of Peasant Workers) – MTTC – in Cesar, and one of the leaders of the Peasant Guard in this department.

The Peasant Guards are an expression of autonomy from the communities facing challenging environments where the state has been one of the perpetrators. In the country’s far north, the Catatumbo Peasant Guard, organised by the Asociación Campesina del Catatumbo – Ascamcat – (Catatumbo Peasant Association), was established in 2014 as a means of organised self-protection in the context of systematic violence linked to mining and energy projects, and the forced eradication of coca crops in the region.

“Cesar is listed as one of the departments with the largest coal reserves in Colombia and, according to the National Mining Agency – ANM, these reserves produced 64% of the total coal in the country between 2018 and 2019,” says David. These realities represent a permanent struggle for the peasant guards, through which they oppose an extractivist economic model that threatens the life projects of the communities.

According to the guards, the current administration has spread messaging that stigmatises their work, which further aggravates the repression against the guard’s members.

According to the Instituto de Estudios para el Desarrollo y la Paz (Institute of Studies for Development and Peace) – Indepaz, out of the 310 social leaders murdered during 2020, 89 were identified as peasants and 19 as Afro-descendants.

David Donado acknowledges the Peasant Guard as a beacon of hope for the life projects of rural communities. During the National Strike that began on April 28, 2021, the community guards have played a key role that earned them a reputation as protectors and defenders of life among the public opinion.

“The popular power of the guard comes through the protection of my environment, my partner, my neighbours. Understanding what is happening around me, solving it, and from there starting to see what the trigger is. (…) The guard does not exclude anyone, but rather invites everyone to defend and take care of our mother earth.” Describes Daniela León, a young woman who is a guard of the Consejo Regional Indígena del Cauca (Regional Indigenous Council of Cauca) – CRIC.

Like Daniela, women are increasingly joining the Indigenous Guard in Cauca. “We want to put an end to so many systematic massacres in our territories; that is why we are the guardians of the territory, and also why people saw the need to create guards (Cimarrona, urban, peasant) in different parts of the country so the community members themselves can take care of the security of their space,” says Daniela.

For decades, the Indigenous Guard of Cauca has nurtured and cultivated the practices of popular and ancestral power inherited from centuries ago. This knowledge is represented in the baton of command which is handed to those who are considered to be committed to the community.

“As our leaders are threatened and mother earth is in danger due to the arrival of multinationals, it was necessary to reestablish and strengthen the Kiwe the’gsa/pu’yaksa’wesx Indigenous Guard. These are groups of people appointed by the community, traditional doctors and the highest authority,” according to the Asociación de Autoridades Ancestrales Territoriales Nasa (Association of Ancestral Nasa Territorial Authorities).

Continuing to legitimise the exercise of self-protection and popular power

For the Indigenous, Cimarrona and Peasant Guards that met at the National Popular Assembly, the creation of other community guards, such as the First Lines, was a great “surprise”, as Manuel, a member of the Cimarrona guard, put it. “(…) But it was delightful to find acceptance from all the people who are in the popular movement here. We found expressions of guards in other settings, in the cities, in the possession of territory, in the seizure of territories”, says Manuel.

For the First Line, and in accordance with what was discussed in the NPA, their practices comply with the legitimate exercise of social protest, and arise as a response to the security forces’ brutal repression during public demonstrations.

In July, the Inter-American Commission on Human Rights (IACHR) presented 42 recommendations for the respect of the human rights of demonstrators. Based on the systematisation of figures from the Defender Libertad (Defend Liberty) organisation, between April 28 and June 30, 84 people were killed, 106 people suffered gender-based violence, 1,790 people were physically injured (out of which 298 are human rights defenders) and 3,274 were arrested.

In the coming months, they hope to hold the first National Assembly of Guards and First Lines, where they will try to consolidate national and local proposals in the current humanitarian context.