Zelenskiy has said that he was grateful to all of Ukraine's partners who visit Kyiv at such a difficult time. 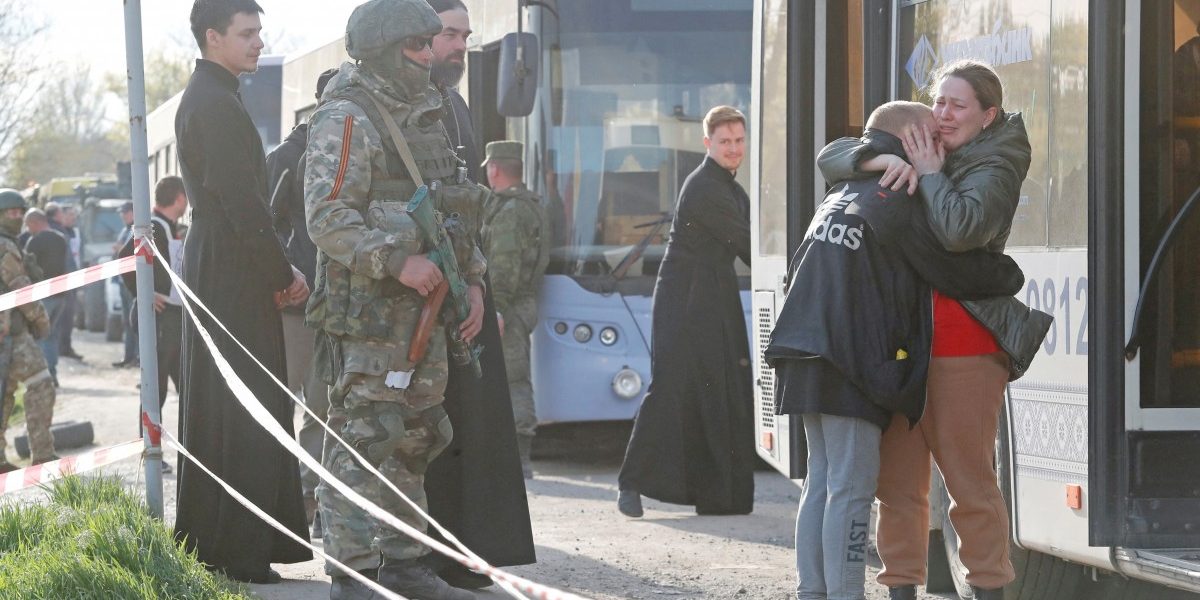 Azovstal steel plant employee Valeria, last name withheld, evacuated from Mariupol, hugs her son Matvey, who had earlier left the city with his relatives, as they meet at a temporary accommodation centre during Ukraine-Russia conflict in the village of Bezimenne in the Donetsk Region, Ukraine May 1, 2022. REUTERS/Alexander Ermochenko

Kyiv, Ukraine: Around 100 civilians evacuated from the ruined Azovstal steelworks in Mariupol were due to arrive in a Ukrainian-held city on Monday, May 2, Ukrainian President Volodymyr Zelenskiy said, after US Speaker Nancy Pelosi made a surprise visit to Kyiv.

The strategic port city on the Azov Sea has endured the most destructive siege of the war with Russia – now in its third month – with Pope Francis, in an implicit criticism of Moscow, telling thousands of people in St Peter’s Square on Sunday it had been “barbarously bombarded.”

“For the first time, we had two days of a ceasefire on this territory, and we managed to take out more than 100 civilians – women, children”, Zelenskiy said in a nightly video address.

The first evacuees would arrive in the Ukrainian-controlled city of Zaporizhzhia on Monday morning, he said, after the UN confirmed a “safe passage operation” was in progress.

Ukrainian Deputy Prime Minister Iryna Vereshchuk said hundreds of civilians remain trapped in the steelworks, a vast Soviet-era complex with a network of bunkers and tunnels.

“The situation has become a sign of a real humanitarian catastrophe, because people are running out of water, food and medicine”, Vereshchuk said on Telegram late on Sunday.

Footage from inside the steelworks showed members of the Azov regiment helping civilians though rubble and onto a bus.

One older evacuee accompanied by young children said survivors were fast running out of food.

“Children always wanted to eat. You know, adults can wait”, she added.

More than 50 civilians arrived at a temporary accommodation centre in Russian-controlled territory on Sunday after escaping from Mariupol, a Reuters photographer said.

A plan to evacuate civilians from areas of the devastated city outside the steelworks had been postponed to Monday morning, Mariupol‘s city council said.

Russia’s military has turned its focus to Ukraine’s south and east after failing to capture Kyiv in the early weeks of a war that has flattened cities, killed thousands of civilians and forced more than 5 million to flee the country.

Kremlin forces were trying to take over the town of Rubizhne and prepare an assault on Sievierodonetsk, in Ukraine’s east, the general staff said on Monday, while further east, Dnipro Governor Valentyn Reznichenko said a Russian missile hit a grain silo, but caused no casualties.

Luhansk region Governor Serhiy Gaidai said three people had been killed by shelling over the past 24 hours.

Two explosions took place in the early hours on Monday in Belgorod, the southern Russian region bordering Ukraine, Vyacheslav Gladkov, the region’s governor wrote in a social media post. The cause of the blasts was not immediately clear and Gladkov said there were no casualties or damage.

With fighting stretching along a broad front in southern and eastern Ukraine, US House of Representatives Speaker Nancy Pelosi pledged continued US support for Ukraine “until victory is won” after she met Zelenskiy in an unannounced visit to Kyiv.

Footage posted by Zelenskiy on Twitter on Sunday showed him, flanked by an armed escort and dressed in military fatigues, greeting a US congressional delegation led by Pelosi outside his presidential office the previous day.

“We stand with Ukraine until victory is won. And we stand with our NATO allies in supporting Ukraine”, Pelosi, the highest-ranking US official to visit Ukraine since Russia invaded on February 24, said on Sunday at a press briefing in Poland.

Zelenskiy praised as substantive four hours of talks with Pelosi focused on US weapons deliveries, adding he was grateful to all of Ukraine’s partners who visit Kyiv at such a difficult time.

US Senate Democratic leader Chuck Schumer said he would add provisions to a $33 billion Ukraine aid package to allow the United States to seize Russian oligarchs’ assets and send money from their sale directly to Kyiv.

Debate: Between Russia and Ukraine, Who Is the Provocateur?

Moscow calls its actions a “special military operation” to disarm Ukraine and rid it of anti-Russian nationalism fomented by the West. Ukraine and the West say Russia launched an unprovoked war of aggression.

Moscow is pushing for complete control of the Donbas region, where Russian-backed separatists already controlled parts of Luhansk and Donetsk provinces before the invasion.

Russian Foreign Minister Sergei Lavrov said Moscow only wanted to guarantee the security of pro-Russian Ukrainians in the east and was not demanding that Zelenskiy “give himself up” as a condition for peace.

“We are demanding that he issue an order to release civilians and stop resistance. Our aim does not include regime change in Ukraine”, Lavrov said in a media interview published on his ministry’s website.