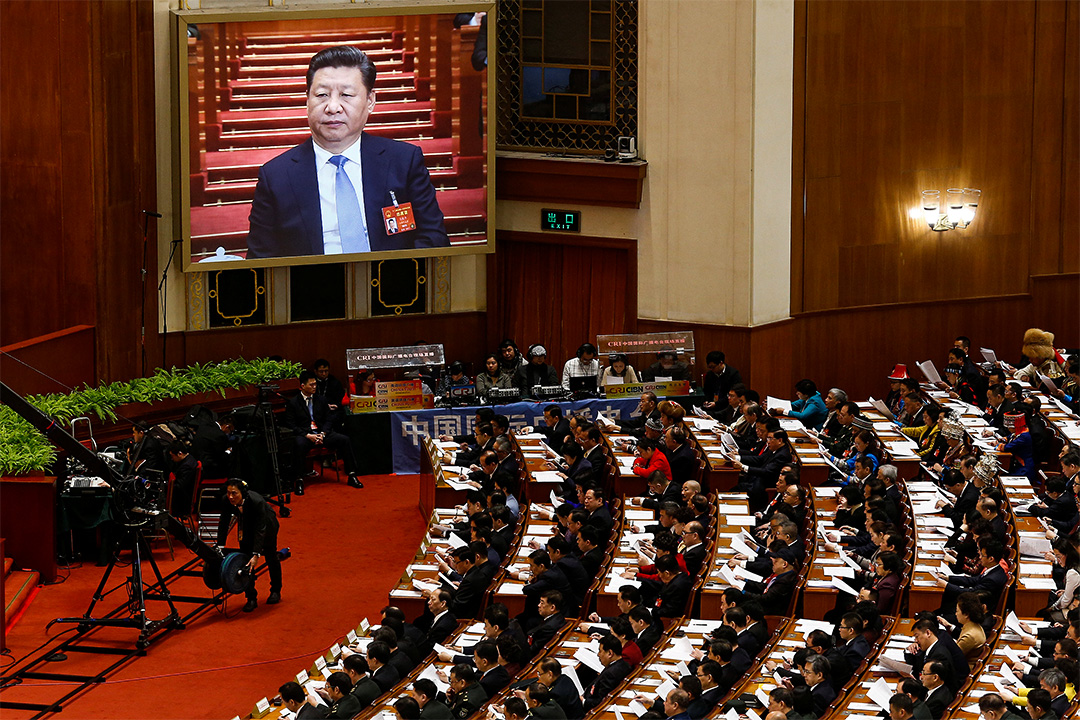 A screens shows China’s President Xi Jinping as China’s Premier Li Keqiang (not pictured) delivers a government work report, during the opening session of the National People’s Congress (NPC) at the Great Hall of the People in Beijing, China, March 5, 2017. Credit: Reuters/Thomas Peter

The ten-day session of China’s parliament – the National People’s Congress (NPC) – that concluded on March 15 was not an ordinary annual event that puts its stamp of approval on the already worked out policies by the leadership of the Communist Party of China (CPC). This was the last session of the nearly 3000-member 12th NPC that was formed along with the assumption of the office of the president by party general secretary Xi Jinping. In many ways it gave a preview of the things to come at the 19th Congress of the CPC later this year in October-November.

Two areas threw up some conspicuous trends. First, Xi’s political leadership and his perspective on domestic and international issues were affirmed. Second, the need for strict measures to maintain stability in the country as a whole – and in Xinjiang and other ethnic minority areas in particular – was reasserted. Whether these measure will prove adequate in coping with emerging challenges is an open question.

Xi at the helm

Premier Li Keqiang in his Work Report frequently referred to the leadership of the Party Central Committee with Xi ‘at the core’ – a formulation that was adopted at the sixth plenum of the central committee in 2016. This expression had been in use for Jiang Zemin but not for his successor Hu Jintao. Li stressed that this decision was in the “fundamental  interest of the party and the Chinese people.”  No doubt, Xi’s ideas serve as guiding policies for the party and are now included in the list of principles after Hu’s ‘scientific development’. But this decision showed that Xi was not sure of the implementation of his policies in some areas of the country. Therefore, most documents insist on ‘upholding the leadership core’ and the need to ‘keep in alignment’. A high degree of power is already concentrated Xi’s hands as he is not only the head of the party, the state and the military, but also of new commissions on national security, finance and economy and internet security. Recently, yet another commission on military-civilian integration was formed with Xi as its chief.

The appointment of a national supervision commission, headed by Xi, and formed under a new law passed by the 12th NPC is meant to oversee governance and the imposition of rule of law at every level – giving a new dimension to governance in China, especially its four-year-old anti-corruption campaign. As many as 240 central officials and over a million lower level cadres have been punished on corruption charges since the campaign launched. It has achieved ‘crushing momentum’ as Li’s report put it.

Clearly Xi’s centralised leadership style and approach to governance has been reaffirmed at the 12th NPC. This will enable him to shape the composition of the delegates to the 19th CPC Congress and also influence the appointment of key functionaries. It should be noted that there were two sets of measures at play here – one centralising power in the top leader and another enforcing rules and procedures.

A soft landing for the Chinese economy?

At the post-NPC press conference, Li said that China has proven wrong the sceptics who had predicted a hard landing for the Chinese economy. They thought the declining growth rate combined with the sluggish performance of the world economy and continuing problems – such as the overcapacity in the real estate sector and large accumulation of non-performing banking assets – would make it difficult for the Chinese planners to prevent a hard landing, causing a major disruption in the economy. But the Chinese leaders handled the situation with care and creativity. Xi announced new, realistic growth targets of 6-8% – a medium to high rate of growth and declared it the ‘new normal’. Therefore, achieving a 6.7% growth rate in 2016 and targeting 6.5% for 2017 was enough to propel growth for the $11 trillion economy. With this in mind, China’s policymakers focused on implementing measures to address people’s livelihood problems, income inequality and regional disparities on the one hand and environmental sustainability on the other. This year, Li announced the creation of over 11 million jobs for urban youth, one million more than last year. The party also plans to lift 10 million people out of poverty this year. And has an additional goal of lifting the remaining 43 million over the poverty line by 2020 – which is the year by which China aims to achieve a ‘well off society in all respects’. (Actually even the revised  poverty line in China is too low – RMB 5000 per year or less than $2 per day.) Another welfare proposal for 2017 is to provide urban residency registration to about 13 million rural migrants who work in middle-level cities.  This is too meagre for a country where at least 300 million rural migrants work in cities and are deprived of adequate facilities for education,  health and housing – all because they continue to have rural hukou (household registration.)

A number of environmental initiatives were announced by Li as well. Reducing the release of major pollutants, strictly monitoring and maintaining air quality in major cities and a pledge to at least make a  3.4% reduction in energy consumption per unit of GDP are among the new initiatives. Whether these will be effective in improving the profile of the world’s largest green house emitter only time will tell.

Changing the structure of the Chinese economy and promoting what the 13th Five Year Plan (2016-2020) describes as “supply-side reforms” is the key to implementing the new policies successfully. The production process focusing on the ‘real economy’ – goods and services – should be driven by innovation and quality consideration and largely address domestic demands – is the perspective underlying the “Make in China 2025” policy which was announced in 2014. China’s approach, which manages both the supply and demand sides with the state and market coordinating their roles, is very different from the ‘supply side economics’ that gives entrepreneurs maximum freedom. Indeed, Li celebrated the fact that China’s service sector has grown to account for over 51% of its GDP.  But the fact that there are serious economic problems – as is evident in the persistently high rate of unemployment, rural and industrial unrest and falling foreign trade, which dropped 0.9% from last year. These problems indicate that China’s economy needs more restructuring.

Utilising China’s surplus capital by channeling it into foreign investment and into new initiatives such as the Asian Infrastructure Investment Bank in Beijing, the BRICS-sponsored New Development Bank in Shanghai and the ambitious One Belt, One Road (OBOR) project (involving over $1 trillion over the next five years) has opened up new opportunities for the country. Li has announced that the forthcoming OBOR International Forum – scheduled for May – will open “a great new chapter of mutually beneficial cooperation”. India, however, continues to stay away from this initiative to protest the China-Pakistan Economic-Corridor.

Xi has been credited with coming up with a ‘new development philosophy’ that is ‘people-focused’. Reiterating the 18th Congress formulation that development should achieve balanced progress in five areas – economic, political, cultural, social and ecological – it emphasises their coordinated implementation through the ‘four comprehensive strategy’ that Xi came up with. This involves achieving a ‘well off society’, deepening reforms, following the rule of law in all spheres of life and practicing strict self-governance in accordance with the norms and principles that the party has developed over the past four years. Through this formulation, Xi has revealed the slogan – “Chinese dream of rejuvenating the nation” and observing two centenaries in the near future (the centenary of the founding of the CPC  in 2021 and of the People’s Republic in 2049). ‘Keep the big picture in mind’ and thinking big are are two of the more common refrains in Xi’s speeches and announcements.

Xi met with delegates from Xinjiang on March 10, midway through the NPC session. A few days before the NPC met, ISIS had released a widely circulated video warning of massive bloodshed in Xinjiang. In this context, Xi’s meeting with deputies from Xijiang took on special significance. He called upon the deputies to build a ‘great wall of iron’ against terrorism in Xinjiang. Xi’s call to safeguard national unity, ethnic solidarity and social stability was complemented by regional party leader Sharhat Ahan’s call for a ‘people’s war against terrorism’. Another leader pointed out how Xijiang, a core part the OBOR initiative, had continued to register steady economic growth, with a high rate of 7.5% last year.

However, these talks did not reflect the development of any fresh perspective for giving political autonomy to the crisis-ridden region of Xinjiang. The “hard strike” policy against insurgents and protesters that has been in operation for many years now is clearly inadequate. Li’s declaration to  uphold and improve the system of regional ethnic autonomy needs to be seen on the ground.

Xi has been able to consolidate his leadership domestically thanks to a reasonable degree of success on the economic front and domestic political management; while also maintaining a high profile in the international arena. This will help him secure his re-election as the party leader at the next CPC. Li too has age and performance as an advantage, but domestic and global challenges will continue to keep the two on maximum alert.

Manoranjan Mohanty is a political scientist and a China scholar. He can be reached at mmohantydu@gmail.com