It has now emerged that the first cases were reported in early December and the Chinese government suppressed doctors from raising the alarm.

As of  February 12, the novel coronavirus (COVID-19) has killed 1,369 people and infected nearly 60,000. However, observers have noticed a decline in new cases of infection. According to the National Health Commission (NHC), the number of new cases fell from a peak of 3,887 on February 4 to 2,015 on February 11.

On Thursday, the Communist Party of China finally fired Jiang Chaoliang, a former banker who has been party chief of the Hubei province since 2016. He is being replaced by Shanghai mayor Ying Yong. The head of the party overseeing Wuhan, Ma Guoqiang, was also replaced by Wang Zhonglin, an official from Shandong province. This came in the wake of a significant jump in the numbers of those infected in Hubei as a result of the changed methodology for diagnosing and counting cases of those infected.

Significant outbreaks in Singapore, Thailand, Hong Kong, Japan and South Korea do not portend well, especially since there are no signs that the virus has peaked. Currently, some 60 million people in China are living under lockdown, severely disrupting normal activity. Given this situation, various cities and local governments have taken recourse to their own draconian measures, including travel restrictions, to prevent the spread of the virus.

On February 10, Chinese President Xi Jinping appeared in the national media in the evening news on an inspection tour of Beijing. He was seen wearing a simple surgical mask and accompanied by aides, and sending the message that the government remains in control of the situation and that the Chinese people will overcome the challenge together. Beijing also sought to quell the anger over the death of Dr Li Wenliang, the doctor who first reported on the virus, by sending a National Supervisory Commission team to Wuhan to “thoroughly investigate issues related” to him.

In fact, now two more doctors in Wuhan say that they were reprimanded by police for trying to warn others in the early days of the onset of COVID-19.

On February 12, Xi chaired another meeting of the Politburo Standing Committee (PBSC) where he said that the epidemic situation has shown “positive changes”. However, he emphasised the continuing challenge that China faced, and the meeting emphasised the need to raise hospital admission capacity, reduce the infection rate by prevention and control, improve treatment and provide more medical resources to Hubei province, especially Wuhan.

Also Read: Coronavirus: How Health and Politics Have Always Been Inextricably Linked in China

Equally, the PBSC highlighted measures to stabilise the economy and press on with measures such as tax and fee reduction to help firms and offer discounted loan rates to producers of anti-virus materials.

It called on a resumption of work and production in all enterprises. Foreign trade companies would also get financing support to promote trade, and a number of major projects would be accelerated. In particular, there was need to focus on employment and massive layoffs were to be avoided. Local governments were asked to use unemployment insurance funds to help businesses to keep their payrolls stable.

Meanwhile, doctors working in Wuhan say that they still know very little about the pathogenesis of the virus. Jiang Li, ICU director at a Beijing hospital who is currently in Wuhan, told Caixin that since they are not yet clear as to the actual cause of multiple organ failure, the treatment of severely affected patients remains a challenge. Also, doctors are pointing to the rapidity with which the condition of patients deteriorates. The biggest challenge, the authorities acknowledge, is to protect the doctors and medical workers themselves as it becomes clear that despite upgrading their hardware and research and public sanitation and prevention framework, China’s system has not been able to take the strain.

According to Global Times, nearly 17,000 personnel belonging to the Communist Party, employees of state-owned enterprises and institutions as well as faculty from universities have been sent to the most heavily affected communities to deal with the “four type personnel”: patients with confirmed cases; suspect cases; patients with fever; and those who have had close contact with the patients involved. All four types are supposed to be taken into centralised quarantine and treatment.

The authorities are still struggling to admit all possible patients given the upsurge. Caixin has reported that even the new hospitals – the Huoshenshan and the Leishenshan, which came up earlier in February – do not yet have their full quota of beds. In fact as of Tuesday, the former touted to have 1,000 beds is using just 286 currently, while the latter which opened later only has 30 beds in use out of the 1,500 promised.

A cover story in China News Weekly on February 5 had published a detailed timeline focusing on the discovery of the early cases and the local government’s response between December 1 and January 20. The item has been taken down but it has survived in various websites around the world. A Google translation notes that information on the virus may have been around since early December. At the end of the month, Dr Li Wenliang, who as at the Wuhan Central Hospital, messaged a WeChat group of his college alumni that it was not SARS but a new coronavirus.

When this leaked, Dr Li was summoned to the Wuhan Municipal Commission and told not to spread misinformation. A public statement was issued saying that there had been 27 cases of “a pneumonia of unknown cause” but that no human-to-human transmission had been detected. On the same day, the first teams from the National Health Commission arrived. 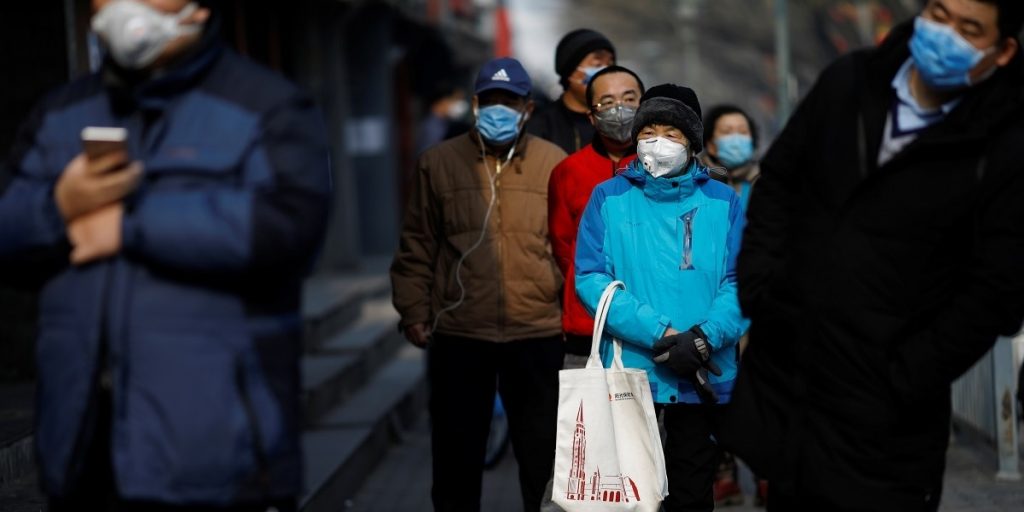 Customers wearing face masks queue for food outside a store, as the country is hit by an outbreak of the novel coronavirus, in Beijing, China February 12, 2020. Photo: REUTERS/Carlos Garcia Rawlins

The first cases had been pointed out as early as December 8, but no effort had been made to close the Wuhan Seafood Wholesale Market, which was only disinfected several times. It was only 22 days later, on January 1, that the market, where the human infection is thought to have begun, was finally closed down.

The Wuhan CDC had commissioned a team of specialists headed by Shi Zhengli to test samples and by January 2, they had sequenced the entire genome of the virus and, after isolating it on January 5, made their findings available to the WHO under the instructions of the NHC. Another team in Shanghai also sequenced the entire genome using another technique and announced the findings on January 10.

By January 9, the coronavirus had been confirmed by a team comprising Xu Jianguo, of the Chinese Academy of Engineering and Li Xingwang who chairs the department of infectious disease at Beijing Ditan hospital and Cao Bin, a respiratory disease expert from Beijing. A paper in the journal The Lancet says that China was late in releasing key genetic data on the COVID-19. But it says that this was not a cover-up as much as the lack of effective procedures in providing outbreak information.

The key turning point was January 20, when the Wuhan Municipal Health Commission acknowledged that there could be “limited” human-to-human transmission. It was only on January 19 that an NHC team investigated the effort and on the evening of January 20, its leader Zhong Nanshan appeared on CCTV to confirm that COVID-19 could spread from person to person and that 14 health workers had been infected while providing care to just one patient.

As per procedure, the Chinese authorities had shared COVID-19 data with WHO, but the first team from the organisation was only permitted to visit the infection area on February 10. The US, too, offered help, but as of now, they have not been given permission.