Earlier on Monday, China accused the United States of spreading fear by pulling its citizens out and severely restricting travel. 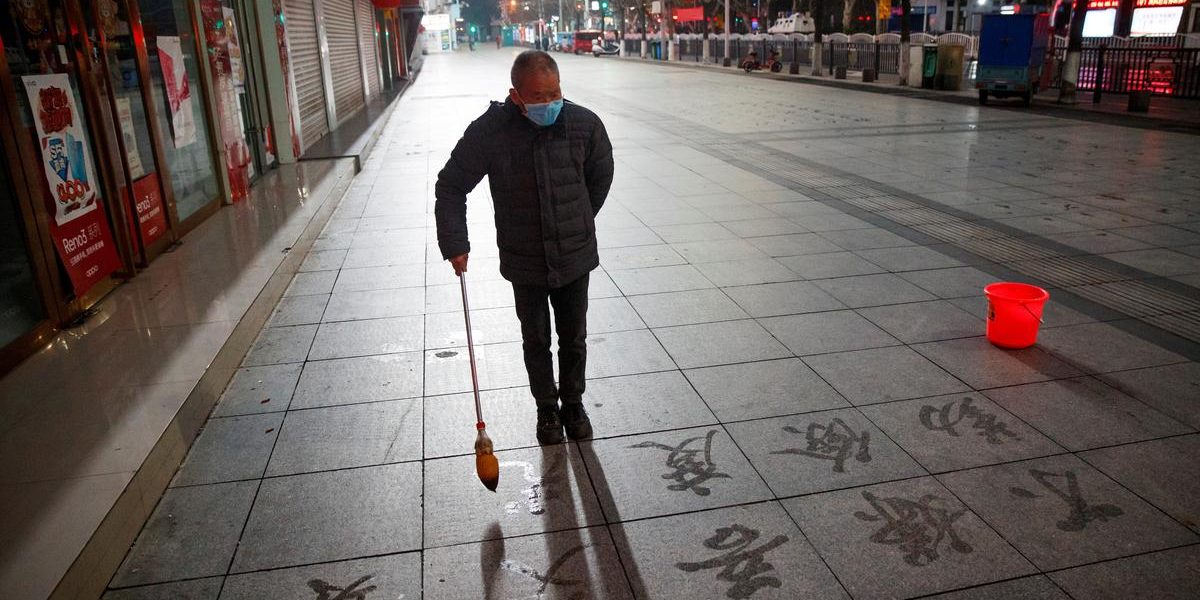 A man wears a face mask as he practices calligraphy of Chinese characters on a pavement as the country is hit by an outbreak of the novel coronavirus in Jiujiang, Jiangxi province, China, February 3, 2020. REUTERS/Thomas Peter TPX IMAGES OF THE DAY

Beijing/Shanghai: China has agreed to allow US health experts into the country as part of a World Health Organisation (WHO) effort to help fight the fast-spreading coronavirus, as the number of cases and deaths continued to mount.

In central China’s Hubei province, epicentre of the epidemic, China state TV reported there were 2,345 new cases of the virus and another 64 deaths, bringing the total of virus-related fatalities in Hubei to 414 by Monday.

The Chinese stock market plunged about 8% on Monday, wiping $393 billion off the value of the Shanghai bourse, on the first day of trading following an extended Lunar New Year holiday in a bid to help keep people at home and contain the virus’ spread.

The White House said on Monday China had accepted its offer to have US experts as part of a WHO mission to study and help combat the virus that emerged in Hubei’s provincial capital of Wuhan.

A 1,000-bed hospital built in eight days to treat people with the virus in Wuhan was due to receive its first patients on Monday, state media said. A second hospital with 1,600 beds is due to be operational later this week.

With Wuhan and some other Chinese cities in virtual lockdown, travel severely restricted and China facing increasing international isolation, fears of wider economic disruption are growing. Sources at the OPEC oil cartel told Reuters that producers were considering cutting output by a further 500,000 barrels per day (bpd) to support prices.

The WHO last week declared the flu-like virus a global emergency. It has spread to 23 other countries and regions. The Philippines reported the first coronavirus death outside of China.

Airlines around the world have stopped flights to parts of China. A suspension by the United Arab Emirates on Monday will affect the Gulf airlines Etihad and Emirates.

Earlier on Monday, China accused the United States of spreading fear by pulling its citizens out and severely restricting travel.

Washington has “unceasingly manufactured and spread panic,” Foreign Ministry spokeswoman Hua Chunying told reporters, noting that the WHO had advised against trade and travel curbs.

“It is precisely developed countries like the United States with strong epidemic prevention capabilities and facilities that have taken the lead in imposing excessive restrictions contrary to WHO recommendations,” she said.

The US Centers for Disease Control and Prevention (CDC) defended the measures taken by the United States, including suspending the entry of foreign nationals who had visited China within the past 14 days.

“We made an aggressive decision in front of an unprecedented threat that action now had the biggest potential to slow this thing down. That’s what the theory is here,” said Nancy Messonnier, director of the CDC’s National Center for Immunization and Respiratory Diseases, as she noted that there are already some 17,000 cases of a virus for which the population does not have immunity.

‘No reason’ for travel curbs

“There is no reason for measures that unnecessarily interfere with international travel and trade,” he told the WHO’s executive board in Geneva.

“The chance of getting this (virus) going to anywhere outside China is very low, and even in China when you go to other provinces, it’s very low,” he added.

The outbreak is reminiscent of Severe Acute Respiratory Syndrome (SARS), a virus from the same family that emerged in China in 2002 and killed almost 800 people around the world out of the roughly 8,000 who were infected.

Chinese data suggests the new virus, while much more contagious than SARS, is significantly less lethal, although such numbers can evolve rapidly. Prior to the latest figures from Hubei, the number of confirmed infections in China stood at 17,205.

The WHO said at least 151 cases had been confirmed in 23 other countries and regions, including Japan, Thailand, Germany, Britain and the United States, which on Monday reported its second case of person-to-person transmission within its borders.

In addition to Monday’s Chinese stock selloff, the yuan currency had its worst day since August, and Shanghai-traded commodities from oil to copper hit their lower limits – all despite the central bank’s injection of 1.2 trillion yuan ($174 billion) into money markets.

The selloff did not extend to US markets, which closed higher on Monday with the S&P 500 up 0.7%.

Fears over the effect of China’s lockdown on global growth have slashed more than 22% off the price of the Brent global crude oil benchmark since its recent peak on January eighth.

Economists are predicting world economic output will be cut by 0.2 to 0.3 percentage point.

‘You have been spotted’

Taiwan’s Foxconn, which makes smartphones for Apple and other brands, has halted “almost all” of its production in China after companies were told to shut until at least Feb. 10, a source said. The company did not respond to a request for comment.

Countries continued to evacuate their citizens from Wuhan.

The United States, which flew nearly 200 people out last week, is planning “a handful more flights.” Russia was due to start evacuating its citizens on Monday, and Canada said 304 of its citizens were seeking to be flown out.

China’s efforts to contain the virus have taken some unexpected, and some might say unnerving, forms.

A video clip posted on the microblogging website Weibo showed people playing mahjong in a village near the city of Chengdu being spotted by a camera mounted on a patrolling drone.

“Playing mahjong outside is banned during the epidemic!” an official tells the villagers through a loudspeaker. “You have been spotted.”