China's Coming of Age as a Maritime Power

For the biggest maritime parade held in China since 1949, the People's Liberation Army Navy deployed 48 warships, 76 aircraft and 10,000 sailors and marines. After addressing the Boao Forum, the Asian Davos, and delivering the message of how China sought to promote inclusive and open economies, Xi Jinping shed his suit and donned combat fatigues to board a destroyer in the South China on Thursday to participate in a huge naval review. There was a clear message in his act – China would deal with the world from a position of strength, in both economic and military fields, and that it was prepared for any eventuality.

For the biggest maritime parade held in China since 1949, the People’s Liberation Army Navy (PLAN) deployed 48 warships, 76 aircraft and 10,000 sailors and marines. The demonstration, in its own way, marks the coming of age of China as a maritime power.

The parade was a culmination of a series of live fire exercises involving the aircraft carrier Liaoning in the vicinity of Hainan island, near the venue of the Boao Forum. The Chinese authorities had said that these were routine annual events to enhance training and professional skills. But now the Chinese say that they will hold live fire drills in the Taiwan Straits next week, in a message to Taipei. These will be the first naval manoeuvres off Taiwan since 2015.

The Chinese action comes in response to a stepped-up US presence in the region. In the past two months, two powerful US carrier groups have operated in the region. Britain and France have also declared that they will send naval vessels to the region to contest China’s extravagant claims in the region.

According to Global Times, “all combat systems of the PLA Navy and 10 air echelons joined the parade.” China’s sole aircraft carrier Liaoning was the centrepiece of the exercise, where on board the destroyer Changsha, Xi watched the take-off of the J-15 aircraft from its deck. Besides this, the parade featured 052C destroyers, Type 071 amphibious transport dock and Type 093 submarines.

Holding the parade in the South China Sea, off Hainan island, is significant for a variety of reasons. First, it is a region which is vital for the PLAN because it hosts its principal submarine base, where its second strike deterrent is based. Second, it is an area which is disputed by the neighbouring countries and where China lost an arbitration case in 2015, bringing into question its claim over the territorial waters of the area. China has reclaimed what an arbitration court said were several low-tide elevation features and built military facilities on them.

Third, the US has been flexing its muscles in the region recently and on April 10, it sent the USS Theodore Roosevelt aircraft carrier group into the region as a show of strength. Earlier, in February, the USS Carl Vinson group had patrolled the disputed region.

Four, it is proximate to Taiwan, a region where tension has been building up between the US and China with the former’s outreach, which includes the passage of a law that encourages high-level visits to the island and the decision to license a submarine manufacturing project there.

Though US President Donald Trump undercut the economic leg of the US response to China in the region by walking out of the Trans-Pacific Partnership, his administration has been more active in pushing military patrols in the region as compared to the Barack Obama administration. US manoeuvres are taking place more frequently and are, no doubt, encouraging China to step up its own military activity.

In January, US secretary of defence Jim Mattis visited Vietnam and in early March, the Carl Vinson docked in Da Nang port. Vietnam has been the most outspoken critic of China’s claims, especially since it has lost the Paracel Islands to the Chinese, who have now been encroaching on the Spratly group and challenging Vietnam in its own EEZ.

At one level, the naval parade was a demonstration of the success of military reforms undertaken by the PLA. Over the past five years, the Chinese have changed the mission of the PLAN from being involved in coastal defence to plans relating to the high seas. The 2015 China Military Strategy document had declared that “China is a major maritime as well as a land country”. Given the assemblage of vessels, the PLAN also signalled that it would now operate as a mission-oriented fleet rather than being separated into its eastern, northern and southern orientation. 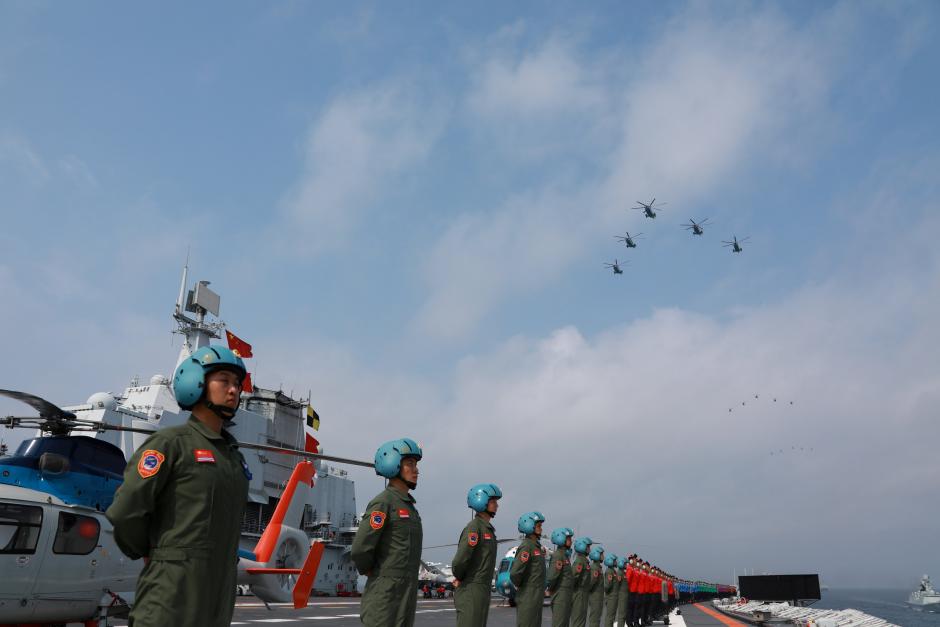 Of all of Xi’s reform efforts, the most successful have been those relating to the PLA. In 2015-2016, the force was reduced in numbers and restructured into geographic theatre commands. The higher command system constituting of the Central Military Commission was flattened and a new system, involving 15 departments, institutions and commissions, created, called the “CMC Chairman Responsibility System”. Xi, of course, is the chairman of the CMC. Later, he also assumed the designation of the head of the “Joint Operations Command Centre”.

The Southern Theatre Command of the PLA which was earlier the Guangzhou Military Region is currently headed by a PLAN officer, Vice Admiral Yuan Yubai, the first non-army officer to head a regional command.

The PLA has declared that it aims to fight and win “informationised local wars”, though an increasing number of analysts say that the term should be “intelligentised local wars”, with reference to the role of integrated Command, Control, Communications, Computers, Intelligence, Surveillance and Reconnaissance (C4IASR) systems.

The exercise featuring the Liaoning, an unfinished vessel formerly called Varyag that China bought from Ukraine, only marks the beginning of the PLAN as an aircraft carrier-operating naval power seeking to rival the US. The 60,000-tonne vessel is seen as a training ship which will give way to two new carriers that the Chinese are building in Shanghai and Dalian. These will be bigger and more capable ships. China, according to reports, plans to have four aircraft carrier groups by 2030.