After last October’s popular revolt, Chileans are due to vote on a new constitution to replace the current Pinochet-era document. But far-right forces are mobilising to prevent any change – threatening deadly violence. 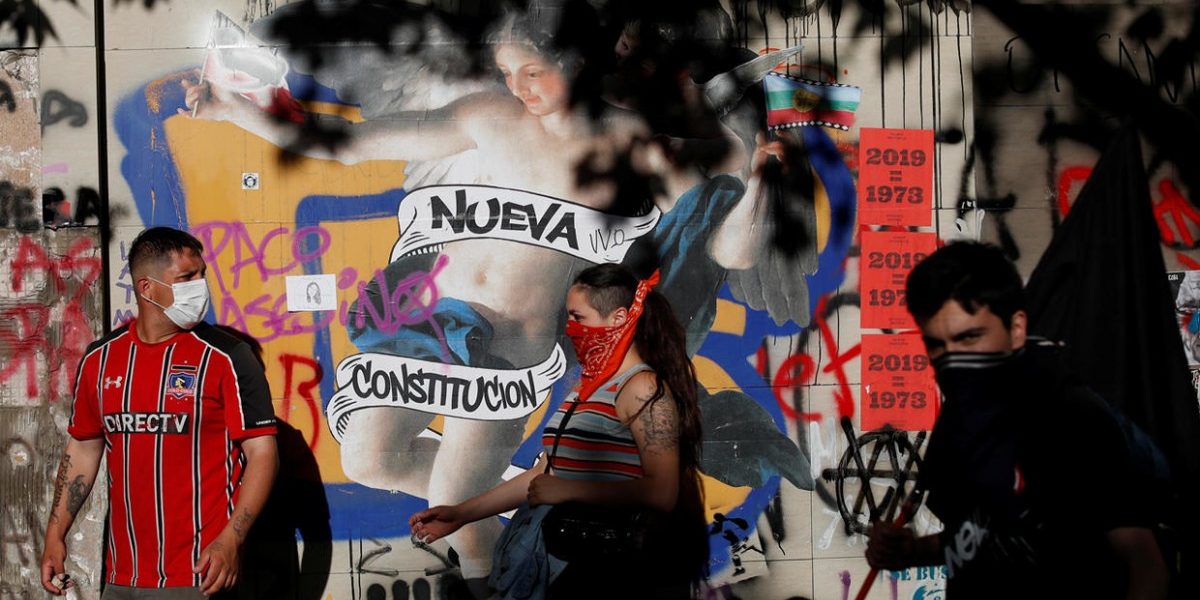 In Chile, riots normally mean tear gas, water cannons, and police violence. This is especially true in the Southern Araucanía region, where overwhelming police presence enforces a century-old repression against the disenfranchised Mapuche people. Add quarantine and a military curfew, and you’ve got a stew going.

But there was a rather different scene on August 1, as over a hundred civilians armed with sticks surrounded the municipal buildings in the southern towns of Curacauitín, Victoria, Ercilla, and Traiguén. They risked a $2,500 fine for breaking the curfew (or $12,500 if one of them was COVID-19 positive). Fires and street fights filled the night, notwithstanding a heavy police presence: nice and armoured, both the police and the army stood by and did nothing.

The repression of the popular revolt in October 2019 — leaving 36 dead and over 11,000 wounded — showed that Carabineros de Chile are not shy about rough play. So, what happened, here — had the beast been tamed?

Or is it just that they’re racists? Because these particular demonstrators weren’t demanding a fair redistribution of wealth, a new constitution or an end to police brutality. They were chanting “away with the indios” or “el que no salta es Mapuche” (If you don’t jump, you’re Mapuche). Their protests were directed at municipalities occupied by Mapuche activists, who were demanding the liberation of twenty-eight Mapuche prisoners. The inmates were imprisoned in the context of their struggle to recover at least some of the 9.5 million acres taken from them by the Chilean state, out of the 10 million they originally had.

The National Assembly has recently approved an investigation into the reasons why the security forces and the military didn’t react to this disorder. But it doesn’t take a lot of speculation to find out why.

After 40 years of a neoliberal constitution inherited from Augusto Pinochet’s dictatorship, the national referendum on a new constitution is finally drawing near. And many right-wingers are starting to dust off their — or their parents’ — old military paraphernalia.

Before the pandemic brought the country to a halt, there had already been violence at demonstrations in support of Pinochet’s constitution. Armed with sticks, helmets, and tailor-made shields (some even had Confederate flags), demonstrators charged not only counter-protesters, but even mere bystanders. The police stood and watched, or sometimes even actively defended them from counterattacks.

Like US right-wing extremists, many of these reactionaries have developed a penchant for firearms. A YouTuber currently awaiting indictment for battery against nine people at one of these protests had repeatedly posted photos of himself with guns, issuing threats against social movements. In February, three men and two women from wealthy families were arrested for possession of firearms, ammunition, and participating in the trade of an AK-47. All five were self-identified pinochetistas. The government, nevertheless, refused to prosecute under anti-terrorist laws due to “lack of evidence” — though lack of evidence hasn’t been a problem when it comes to persecuting Mapuche activists.

Indeed, assault rifles seem to be the latest fad in far-right circles. In the last week of August, professors of the Universidad Federico Santa María received death threats from a self-identified nationalist group. In the email, which had the picture of an AK-47 attached to it, the group condemned the university’s secular curriculum. Claiming to have twenty-two men ready for action, they warned: “We shall eradicate you, we shall cleanse Chile starting with you. Chile has changed and you will die.” 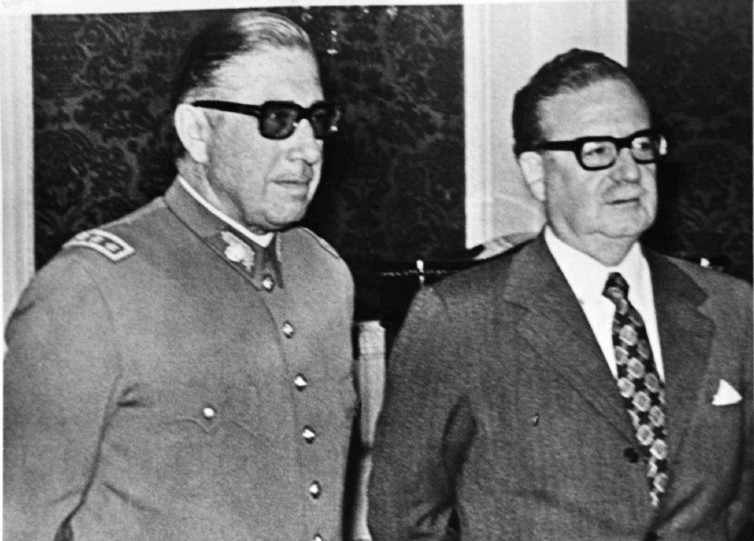 This rise in paramilitary activity harkens back to the clear division in Chilean society that emerged before and during socialist leader Salvador Allende’s presidency (1970–73). Then, the most prominent fascist group was Patria y Libertad, whose activities ranged from waging street brawls against leftists and terrorist bomb attacks to political assassinations and even attempting a coup early in 1973, before Pinochet and his army backers succeeded on September 11 that year.

While the Patria y Libertad ideology is present within the ruling UDI and RN parties, it shines the brightest in José Antonio Kast’s Partido Republicano (PR). The PR has over thirteen thousand members despite having existed for little more than a year. Pushing a discourse based on fake news, defending the dictatorship, and equating leftists with terrorists, Kast is now part of the campaign to reject the new constitution.

Meanwhile, the country reopens after being one of the worst hit by coronavirus, with a current death toll of roughly twelve thousand and a higher total death rate per million than even the United States.

Social movements’ anger has only grown: the slogan on the streets these days is no longer “Dignidad” (Dignity) like in the first days of October 2019, when over one million people filled the streets demanding an end to Chile’s neoliberal system. Now it’s “Hambre” (Hunger).

With little to no institutional support, locally organised soup kitchens have become many Chileans’ daily support, and the prospect of over 1 million unemployed by the end of the year brings back flashes from the worst days of Pinochet’s dictatorship, when families had to cut expenses to the point of sharing individual tea bags. Working from home isn’t a reality for most of those Chileans lucky enough to retain their jobs — they thus risk contagion each day at work, plus the uncertain future only a defective, highly privatised health system can offer.

Recently, the opposition did claim one victory in the so-called 10 percent Withdrawal Law, pushed by independents and the Christian Democrats. As a coping mechanism for the economic crisis, people will now be able to withdraw 10 percent from their pension funds. But this offers only the most short-term relief. The average withdrawn is just $1,277 (indeed, Chile’s below-the-poverty-line pension system was one of the triggers of last October’s revolt). And it is clear that the consequences of this financial cannibalism will bite back in old age if the current system isn’t transformed. Nonetheless, this initiative shouldn’t be condemned too harshly, when any more radical proposals would likely have risked a presidential veto.

As Sebastián Piñera’s government takes the first steps towards reopening the country, resumed protests seem inevitable. Piñera has taken note of this — and reacted accordingly. Former mayor of the southern city of Los Ángeles during the dictatorship, Victor Pérez, was appointed as the new minister of interior and national security. Another admirer of Pinochet, he’s suspected of having collaborated with the infamous Colonia Dignidad, a colony of Germans and Chileans that doubled as a centre for internment, torture, and murder of dissidents, with Nazi fugitive Paul Schäfer as leader. Who better to handle security at public demonstrations?

The latest déjà vu from the 1970s comes from trucking companies. These historical allies of the Right are once again playing a destabilising role, like they did to Salvador Allende’s government, with CIA support: at the end of August they announced a block on activities, declaring they “won’t transport even one kilo of sugar.” While the stoppage in the 1970s was a response to the nationalisation of industries, now the aim is to push authoritarian bills on policing — a topic that the firms say concerns them due to arson attacks on trucks in the Araucanía Region. Their stoppage, itself arguably “terroristic,” risks more hunger in an already dire economic crisis.

The coming October 25 referendum could mark meaningful change in one of the world’s most unequal countries. Though the option to approve a new constitution seems to be the favourite, with 71% support in the polls, political violence may well follow. For the first time since Salvador Allende’s presidency, Chileans have the chance to shake the racist and deeply unequal foundations of their country. But like back then, the Chilean elite and reactionary groups are mustering their forces to avoid such a change.

Octavio García Soto is a freelance journalist and has written for La Tercera (Chile), La Estrella (Panamá), and Taz (Germany).

This article was first published on Jacobin. Read the original here.