Chile: One Million March for Social Reform in Santiago

Chile's unrest is the latest in a flare-up of protests across the world – from Beirut to Barcelona – each with local triggers but also sharing underlying anger at social disparities and ruling elites.

Santiago: As many as a million Chileans protested peacefully late into the evening on Friday in the capital Santiago in the biggest rallies yet since violence broke out a week ago over entrenched inequality in the South American nation.

Traffic already hobbled by truck and taxi drivers protesting road tolls ground to a standstill in Santiago as crowds shut down major avenues and public transport closed early ahead of marches that built throughout the afternoon. 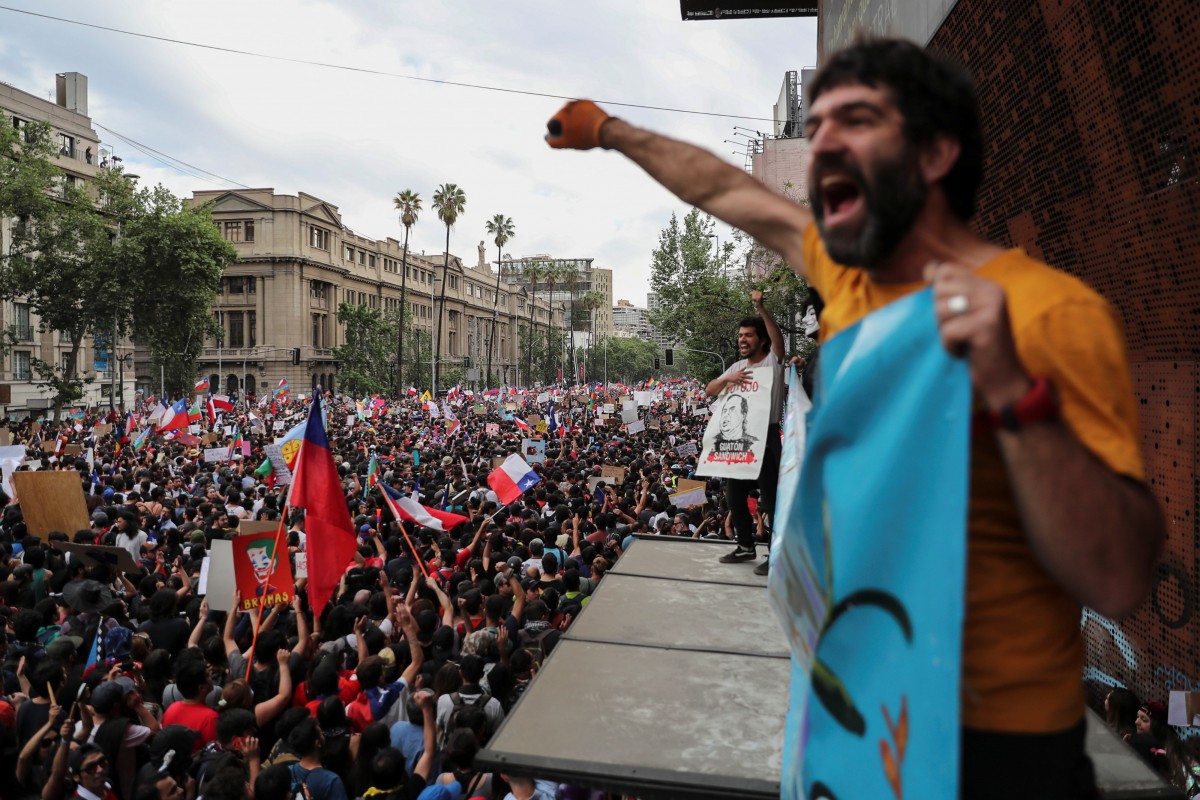 By mid-evening, most had made their way home in the dark ahead of an 11 pm military curfew.

Santiago Governor Karla Rubilar said a million people marched in the capital – more than 5% of the country’s population. Protesters elsewhere took to the streets in every major Chilean city.

“Today is a historic day,” Rubilar wrote on Twitter. “The Metropolitan Region is host to a peaceful march of almost one million people who represent a dream for a new Chile.”

Some local commentators estimated the Santiago rally well over the million mark, describing it as the largest single march since the dying years of the dictatorship of Augusto Pinochet.

Chile’s unrest is the latest in a flare-up of protests in South America and around the world – from Beirut to Barcelona – each with local triggers but also sharing underlying anger at social disparities and ruling elites.

Protests in Chile that started over a hike in public transport fares last Friday boiled into riots, arson, and looting that have killed at least 17 people, injured hundreds, resulted in more than 7,000 arrests and caused more than $1.4 billion of losses to Chilean businesses.

Chile’s military has taken over security in Santiago, a city of 6 million people now under a state of emergency with night-time curfews as 20,000 soldiers patrol the streets. A woman poses for a photo in front of riot policemen during a protest against Chile’s state economic model in Santiago, Chile October 25, 2019. Photo: Reuters/Edgard Garrido

Clotilde Soto, a retired teacher aged 82, said she had taken to the streets because she did not want to die without seeing change for the better in her country.

“Above all, we need better salaries and better pensions,” she said.

Chile’s center-right President Sebastian Pinera, a billionaire businessman, trounced the opposition in the most recent 2017 election, dealing the center-left ruling coalition its biggest loss since the country’s return to democracy in 1990.

But as protests ignited this week, Pinera scrapped previous plans and promised instead to boost the minimum wage and pensions, ditch fare hikes on public transportation and fix the country’s ailing health care system.

“We’ve all heard the message. We’ve all changed,” said Pinera on Twitter following the peak of the rallies. “Today’s joyful and peaceful march, in which Chileans have asked for a more just and unified Chile, opens hopeful paths into the future.” 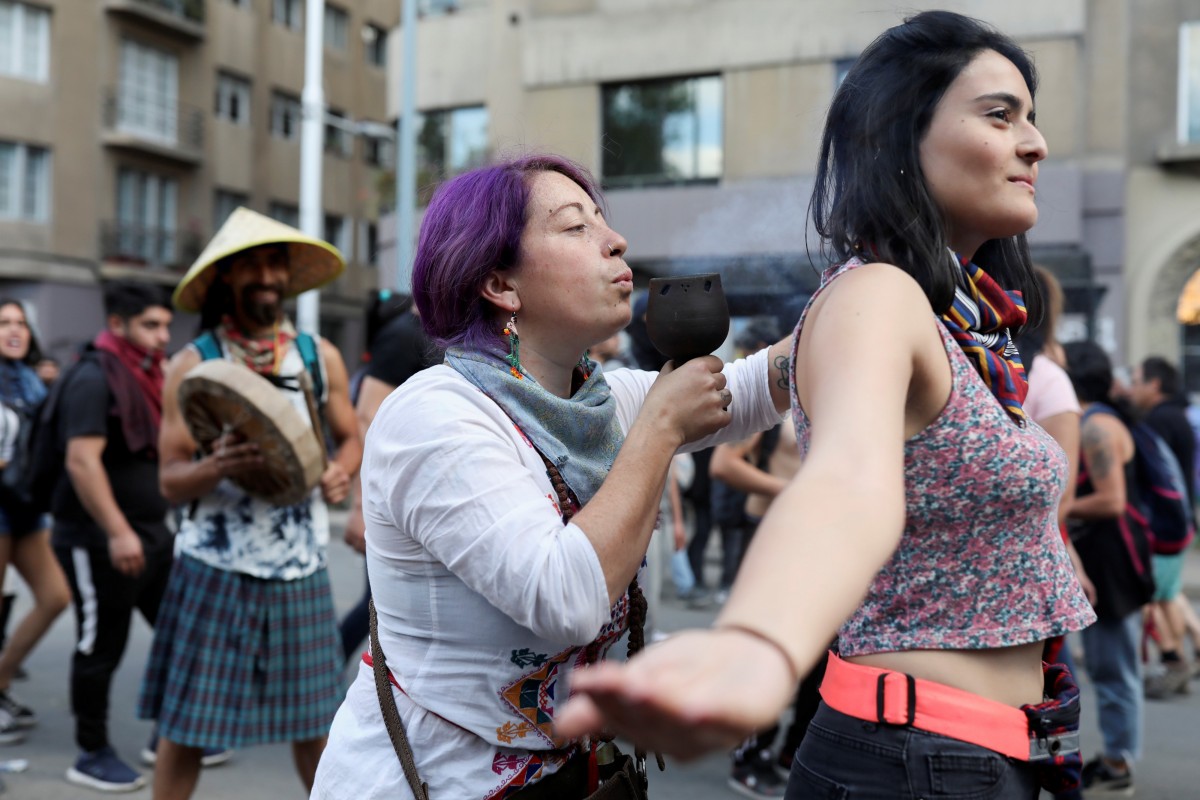 Still, many protest placards, chants, and graffiti scrawled on buildings around the city call for his exit.

As crowds of colourful demonstrators stretched along Santiago‘s thoroughfares as far as the eye could see, the noise of pots and pans being clanged with spoons, a clamour that has become the soundtrack for the popular uprising, was ear-splitting.

“The people, united, will never be defeated,” the crowds chanted over the din.

By early evening there had been no signs of violence or clashes with the security forces, who maintained a significant but low-key presence inside paint-spattered and stone-dented armoured vehicles parked in side streets. 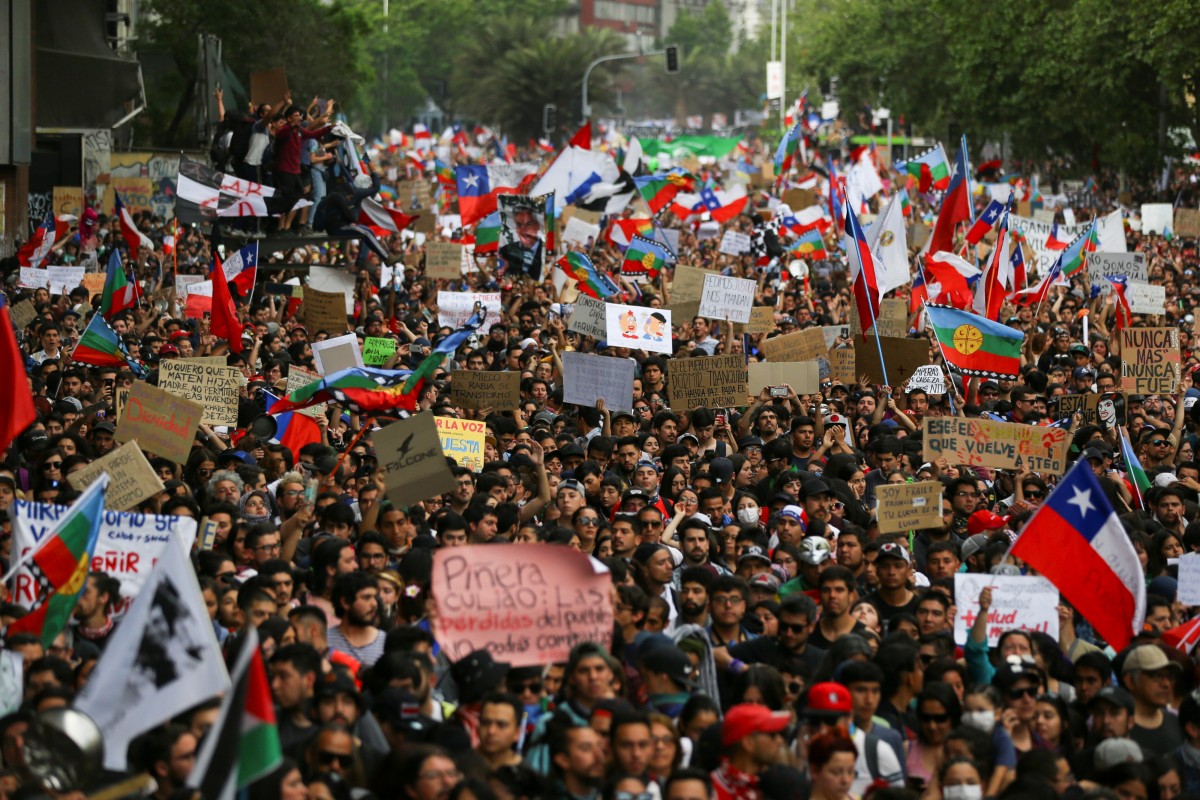 Beatriz Demur, 42, a yoga teacher from the suburb of Barrio Brazil, joined a stream of demonstrators shuffling toward Plaza Italia with her daughter Tabatha, 22.

“We want Chile to be a better place,” said Demur. “The most powerful have privatised everything. It’s been that way for 30 years.”Eyeing the crowds packing the square, her daughter said: “I have waited for this a long time … It’s not scary, it’s exciting. It means change.”

Anali Parra, 26, a street hawker, was with her daughter Catalina, 9, and five-month-old son Gideon Jesus, his buggy decked in streamers and an indigenous Mapuche flag.

“This isn’t going to go away,” Parra said. “Pinera should just go now.”

On Friday morning, trucks, cars, and taxis had slowed to a crawl on major roads, honking horns and waving Chilean flags. “No more tolls! Enough with the abuse!” read bright yellow-and-red signs plastered to the front of vehicles.

Many bus drivers in Santiago also staged a walk-off on Friday after one of their numbers was shot.

While much of the wealthy east Santiago has remained calm under evening lockdown, the poorer side of the city has seen widespread vandalism and looting. 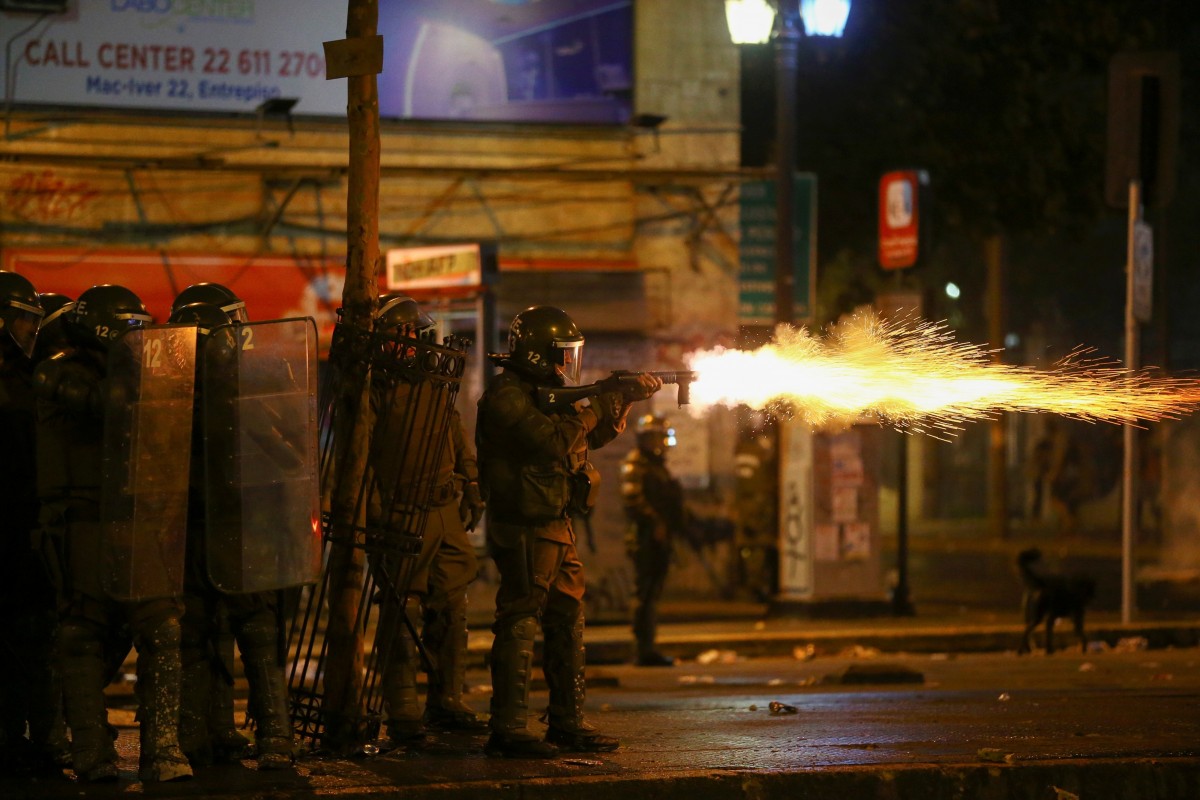 Pinera told the nation on Thursday he had heard the demands of Chileans “loud and clear.”

He has sent lawmakers legislation to overturn a recent hike in electricity rates and called for reforms to guarantee a minimum wage of $480 a month and introduce state medical insurance for catastrophes.

Seated with a group of elderly Chileans over lunch on Friday, Pinera put finishing touches on a bill to hike minimum pensions by 20%. “We must approve these projects with the urgency that Chileans demand,” Pinera said. Lawmakers pushing the reforms forward were nonetheless forced to evacuate the country’s Congress in the port city of Valparaiso earlier in the day when angry protesters rushed the building, overwhelming security forces.

An online poll conducted by local company Activa Research of 2,090 people between Oct. 22-23 found 83% of respondents said they supported the goals of the demonstrators, but 72.5% opposed violence as a method of protest.

The principal causes of the protests were low salaries, high utility prices, poor pensions, and economic inequality, it said.