Amid Violence and Displacement, Child Labour Doubles in Iraq

UNICEF reports say nearly 3.5 million children are missing out on an education in Iraq. 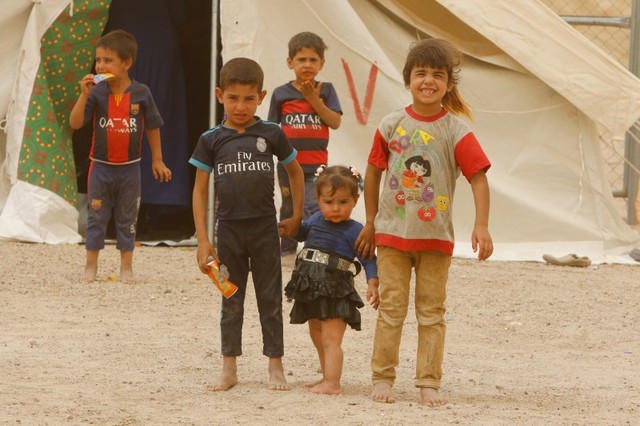 Displaced Iraqi children, who fled from Falluja because of ISIS violence, pose for photographer during a dust storm at a refugee camp in Ameriyat Falluja, south of Falluja, Iraq, June 16, 2016. Credit: Reuters/Ahmed Saad

Baghdad: More than half a million Iraqi children are estimated to be at work rather than at school as violence and displacement hurt the income of millions of families, according to UNICEF.

The number of children currently working, more than 575,000, has doubled since 1990, the year when Iraq attacked Kuwait, setting off a chain of events that led to the 2003 US-led invasion and the sectarian strife that continues to this day.

“I used to go to school and work here for half a day with a low salary,” 12 year-old Ali Hussien Khudhair, who works the angle grinder in a blacksmith’s shop in Baghdad, said.

“I quit school and started working full time here and he (the owner) gives me full wages,” he told Reuters TV.

UNICEF said, since the beginning of 2014, almost 10% of Iraqi children – more than 1.5 million – have been forced to flee their homes because of violence. In 2014, the ISIS group took control of large areas in northern and western Iraq.

Nearly one in five schools is closed due to conflict and almost 3.5 million children of school-age are missing out on an education, UNICEF said in a report on June 30.

In total, at least 3.6 million children in Iraq are at risk of death, serious injury, sexual violence, abduction and recruitment into armed groups, an increase of 1.3 million since the past 18 months, according to UNICEF.

“I wish to go back to school and play with my friends,” Khudhair said. “I would be glad to go back and learn to read and write; I will be ashamed to have to say that I can’t read when I grow up.”

“I’m working and learning the craft, it’s better than school. What rights do graduates have? They are selling water on streets,” 14 year-old Karrar Jaffar, who works in a car mechanic’s shop, said.

“The government does nothing. It’s better for me to learn a craft,” he said, his hands smeared with brake fluid.