The damages were awarded to nine individuals for physical and emotional injuries. One anti-fascist activist, Heather Heyer, was killed by a self-identified neo-Nazi. 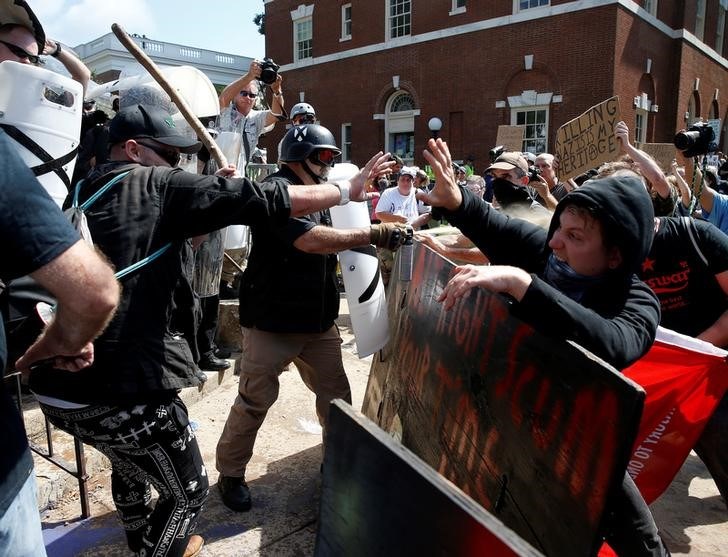 White supremacists clash with counter protesters at a rally in Charlottesville, Virginia, US, August 12, 2017. Photo: Reuters

Charlottesville: A United States federal jury ordered the organisers of the 2017 “Unite the Right” rally to pay damages of more than $26 million (€23.1 million) on Tuesday.

The court in Charlottesville, Virginia, found a number of white nationalist organisers and leaders liable for the violence that erupted at the rally in that city.

The damages were awarded to nine individuals for physical and emotional injuries. One anti-fascist activist, Heather Heyer, was killed by a self-identified neo-Nazi on the day.

What were the charges?

The white nationalists were found liable for damages on four out of six counts, including organizing violence against African Americans, Jews and others as part of a conspiracy.

The 11 jurors took three days to deliberate after an almost month-long trial. They were unable to come to a decision over the remaining two counts.

The lawyer for the plaintiffs, Roberta Kaplan, said they would refile the suit so that a different jury could resolve the final two claims.

But she called the amounts awarded by the jury “eye-opening.” She had asked for damages between $3 million and $5 million for emotional injuries and $7 million to $10 million for physical ones.

Who were the defendants?

Some of the most well-known neo-Nazis and white supremacists were the subjects of Tuesday’s verdict.

Richard Spencer, who came to prominence through his attempt to rebrand modern US fascism as the “alt-right,” called the trial “activism by means of lawsuits” that was aimed at bankrupting him and the other far-right defendants. He said he would appeal the decision.

Jason Kessler, the main organiser of the rally, and Christopher Cantwell, known as the “crying Nazi” for the tearful video he made after learning that police had issued a warrant for his arrest, were also found liable in the lawsuit.

Throughout the trial, the defendants continued to use racial slurs and avow their support for white supremacy. As well as trying to pin the blame for the rally’s violence on the counter-protesters, they also turned on each other.

The prosecution backed up the accusation of planned violence with a large array of chat room messages, text messages and social media posts sent before the rally.

What was the ‘Unite the Right’ rally about?

The rally brought together far-right extremists of varying flavours under the pretence of defending a statue of the confederate leader Robert E. Lee in the Virginian town.

On August 11, white nationalists and other neo-Nazis marched through the local university campus shouting “Jews will not replace us” while carrying tiki torches.

The following day they gathered in the park where the statue was located. Various community and anti-fascist groups came together to counter the far-right extremists who carried out several acts of violence during the day. This culminated in James Fields driving his car into a group of counter-protesters, killing one.

Then-President Donald Trump sparked an outcry following the incident by failing to condemn the white nationalist, many of whom were his supporters. He then went on to claim that there were “very fine people on both sides.”

The article first appeared on DW.