Business as usual for the Tajik president, Emamoli Rakhmon, at the new year ‘Nowruz’ celebration in March. Photo: Press service of the president of Tajikistan. 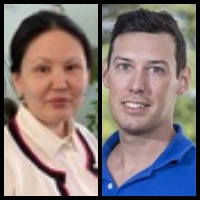 The authoritarian Central Asian state of Tajikistan admitted to its first cases of COVID-19 in late April. This followed a World Health Organisation (WHO) decision to dispatch a team to investigate previous claims that the country was coronavirus-free.

To the west, Tajikistan’s near neighbour Turkmenistan, known as the North Korea of Central Asia, continues to report no COVID-19 cases and has avoided use of the word coronavirus as much as possible in order to deter the spread of information about the pandemic. Turkmen police have reportedly arrested citizens found to be discussing coronavirus in public, or wearing protective masks.

Meanwhile, in Belarus – which has earned the moniker of “Europe’s last dictatorship” – the president, Alexander Lukashenko, advocated vodka, hockey and folk medicine against the virus and in April reassured Belorussians that “nobody will die from coronavirus in our country”. As of May 21, Belarus has already registered more than 32,000 coronavirus cases and 179 deaths.

Censorship, repression, and disinformation are hardly new strategies for post-Soviet regimes. Just like many of their counterparts elsewhere in the world, Central Asia’s authoritarian strongmen have weaponised the pandemic to further consolidate their hold on power – those, that is, who have acknowledged the virus threat in the first place.

Also read: How the World Won and Trump Lost at the World Health Organisation’s Key Assembly

Just as COVID-19 has offered opportunities to authoritarian – and would-be authoritarian – leaders, so it also presents significant challenges. Authoritarian rule is sustained by a range of tools and mechanisms, from coercion to co-option, but can rarely survive a major crisis without offering something more. Authoritarian regimes often define this “something more” as strength and stability, and this has also been the case during COVID-19. For example, Kazakhstan’s state and state-aligned media has been replete with references to “discipline” in recent weeks.

A global pandemic can play into the hands of authoritarian rulers in this regard, but it can also leave them dangerously exposed.

In Kazakhstan, Kyrgyzstan and Uzbekistan, authorities have enforced lockdown and quarantine measures in a typical Soviet military style. Soldiers equipped with guns and armoured vehicles are patrolling public spaces and restricting the movement of citizens and traffic between, and within, cities.

The Kazakhstani authorities are planning to introduce a new mobile application, developed by the Ministry of Health Care and local government of Nur-Sultan city, called Smart Astana to track physical movement of citizens who are in quarantine. In the context of these Central Asian regimes in particular, the use of such technologies presents a high risk of data abuse and manipulation by the authorities.

Despite the risks, citizens from Central Asian countries have flooded social media with photos and videos complaining about the devastating conditions in hospitals and quarantine facilities within days of the outbreak. Some 170 people being held in quarantine at a former US military base in Kyrgyzstan complained of bad smells, a lack of heating, and “horribly cold and dirty” conditions.

Kazakhstan, Kyrgyzstan and Uzbekistan swiftly enforced state of emergency legislation prohibiting photo and video recordings in medical institutions and quarantine facilities. They threatened people who disobeyed with prosecution for “spreading false information”. Some civic activists, bloggers and journalists have already been imprisoned on the same charge.

In Tajikistan, Turkmenistan and Belarus, governments have continued to operate as if business were carrying on as usual. They have denied the pandemic and given a green light to large celebrations such as the New Year (“Nowruz”) celebrations at the end of March in Tajikistan, World Health Day in April in Turkmenistan, and a military parade in Belarus in May.

In the absence of a strong government public health response, many Turkmens and Belarussians are limiting their contacts and avoiding mass gatherings voluntarily.

Also read: Could the Impact of COVID-19 Herald Promising Changes in Iran?

In this context, the authoritarian governments in the former Soviet bloc have responded to the pandemic by reinforcing their grip on power even further. Temporary measures introduced during the emergency, such as harsh legislative measures and new surveillance tools, are likely to remain a permanent feature of the new normal. But at the same time, the pandemic has left these regimes dangerously exposed to the risks of rising public discontent unless they take measures to regain the trust of their citizens.