The High Tech Protests of the Catalan Independence Movement

The advent of instant messaging apps and surveillance technology has ushered in new forms of protests along with ways to counter them. 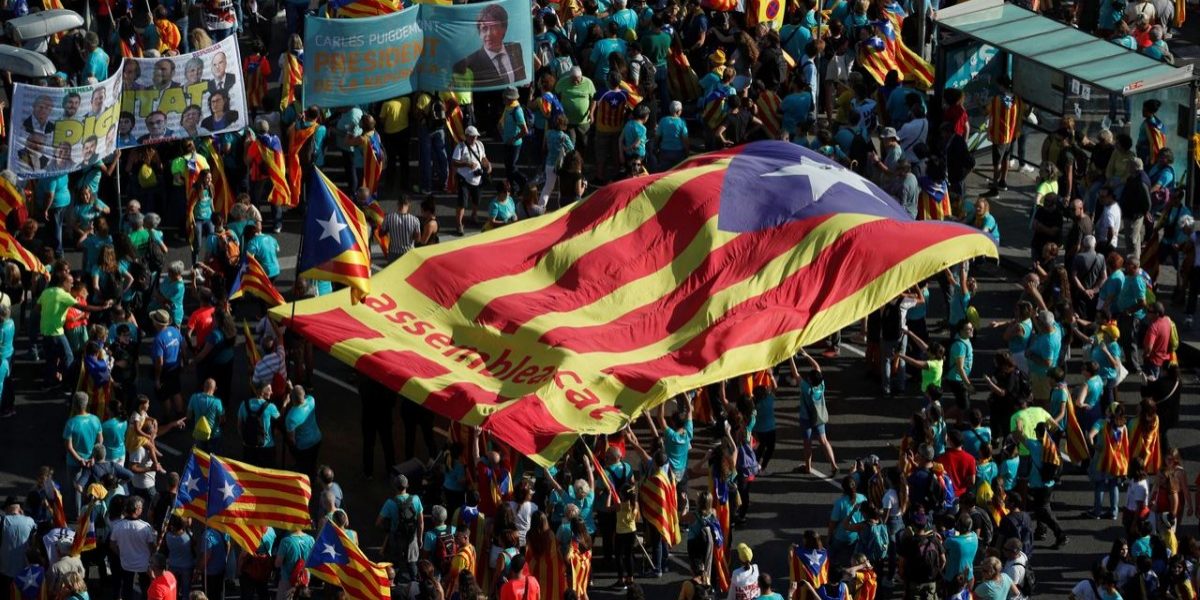 People across the world are demonstrating their discontent in increasingly creative and disruptive ways.

The past year has seen schoolchildren across the world join the Fridays for Future strikes, witnessing mass walkouts from schools across the globe. In Chile, coordinated fare-dodging protests on public transport – also led by school pupils – has now grown into mass unrest against the rising cost of living. During the past two weeks, protests have erupted across Lebanon in opposition to rising taxes, involving road blockades and a human chain across the country to illustrate the unity of the people.

Something notable about these protests, from Chile to Lebanon to Catalonia, is that protesters are mobilising around far more than single issues. Their primary demands – from economic issues to climate change – are set against a backdrop of questioning the status quo more broadly. And it’s not just demands that are expanding: the ways in which civil disobedience and direct action are carried out is also becoming increasingly novel.

A closer look at the continuing demonstrations in Catalonia illustrates the significance of this. 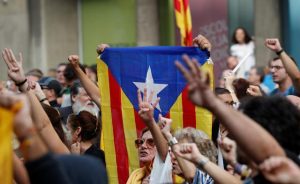 Supporters of Catalonia’s independence hold on Estelada (Catalan separatist flag) as they gesture during a protest against upcoming ruling of the Spanish Supreme Court against the independence movement’s leaders, in Barcelona, Spain, on October 13, 2019. Photo: Reuters/Albert Gea

In September, a new initiative was created in Catalonia: Tsunami Democràtic. Nobody fully seems to know where it came from or who was the organising force behind it. Those initially sharing its tweets came from different political families, including all three pro-independence parties, as well as some of those who had been imprisoned as a result of their involvement in the Catalan independence movement.

Following its initial announcement, little was heard from Tsunami Democràtic besides occasional tweets highlighting the effectiveness of peaceful civil resistance. This changed on October 11 – the day the Supreme Court sentence against the Catalan leaders was expected – when Tsunami Democràtic released a song: “La Força de la Gent” (The Strength of the People). This echoed the spirit of the song “Agafant l’Horitzó” (Let’s take the Horizon), which was released prior to the independence referendum of October 1 2017. The group then started organising protests.

So far, Tsunami Democràtic has only called three of the countless protests we’ve witnessed since Monday October 14, when sentences were announced against the seven government ministers as well as the speaker of the House and two civil society leaders.

The first – and largest – protest was the occupation of Barcelona airport on the same day the sentences were announced. Some 155 flights were cancelled and the disruption caused to the airport was considerable, as the blocking of roads and of one of the terminals lasted well over six hours. On October 21 Tsunami Democràtic called another protest, with only a few hours’ notice, prompted by a surprise visit to Barcelona by Spanish prime minister, Pedro Sanchez. The protest had a simple demand – #SpainSitandTalk – following the weekend’s refusal by Sanchez to answer the Catalan president’s calls. 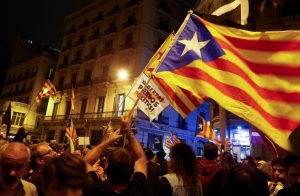 The group’s great success in calling and enacting enormous protests at the drop of a hat has been enabled, to a large degree, by technology. It has used the messaging app Telegram with particular success, gathering over 385,000 subscribers. Telegram channels (which are designed to send information from a single source to subscribers) have become crucial sources of information and organising around the world.

Tsunami Democràtic has also developed a new app designed to coordinate protests in real time depending on people’s locations. This proved so popular that its systems collapsed during the first few hours because so many people tried to download it.

The app, which has not been put to use yet, is accessible using QR codes that are shareable among up to ten users. This means that if one of the codes (or nodes) is acting suspiciously, the whole chain can be removed. It is designed to organise users (called water drops) into actions to create a “tsunami”. This could include the occupation of transport hubs (such as train stations or airports), but also the coordination of demonstrations against specific events. The idea is quite a novelty, and has already gathered interest among tech communities.

Tsunami Democràtic has already made waves. The Spanish Home Office has labelled it a terrorist organisation. Last week, the Guardia Civil (Spain’s paramilitary police force), closed down the Tsunami Democràtic website, and the home office minister announced that they are investigating who is behind it. So far, except for the musicians that appear in the song, and football manager Pep Guardiola’s video reading Tsunami’s manifesto, there are no other public faces. 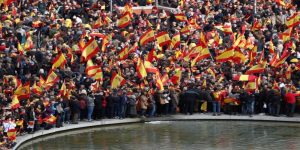 We live in a time when protests are growing on a worldwide basis, often in response to undemocratic actions of governments.

In this light, the actions of Tsunami Democràtic are notable: they demonstrate a tendency for a growing proportion of people to turn to creative forms of disruptive protest. These methods are typically open, fluid, without rigid structures. They represent novel attempts to articulate a voice when it appears that those in power are increasingly uninterested in listening.

The rise in mass civil disobedience movements such as Tsunami Democràtic is often talked about in relation to the idea, put forward by the political scientists Erica Chenoweth and Maria Stephan, that a campaign which attracts 3.5% or more of the population will bring about change. This is in no small part thanks to Extinction Rebellion’s popularisation of this claim.

Whether or not this is true, in the case of Catalonia, the proportion of the population engaging in protest is already much higher than 3.5%. Conservative local police estimates indicate that there were more than 500,000 people participating in the marches for freedom during the last general strike: about 14% of the Catalonian population.

Enabled by technology, such movements are becoming more organised and creative than ever. While there is no guarantee that these novel forms of protest will be successful, the recent news that fracking will be banned in the UK highlights the way that persistent, ongoing, coordinated and novel efforts to challenge those in power can result in surprisingly positive outcomes.

Monica Clua Losada is an Associate Professor in Global Political Economy at University of Texas Rio Grande Valley and David J. Bailey is a Senior Lecturer in Politics at University of Birmingham.