Brexit: What's Happened and What's Next?

For the third time in two days, Prime Minister Boris Johnson suffered major defeats in his plans to take the UK out of the EU with or without a deal. 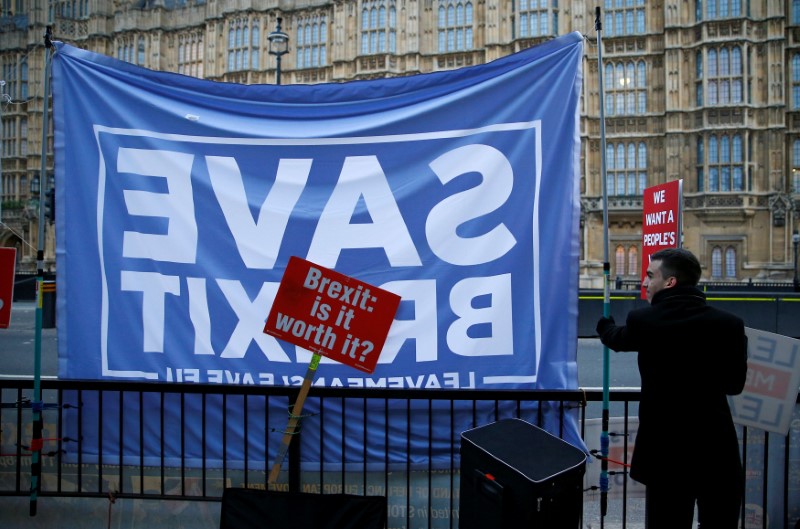 A pro-Brexit demonstrator protests outside the Houses of Parliament in London, Britain January 29, 2019. Credit: Reuters/Henry Nicholls

British Prime Minister Boris Johnson’s attempt to call a snap election failed to garner the support of two-thirds of lawmakers in the House of Commons on Wednesday – leaving the Brexit process in limbo.

It was his third defeat in the lower house of parliament in just two days – coming right after opposition MPs and rebels in Johnson’s Conservatives approved a Bill that could force Johnson to ask the European Union for another Brexit delay, a step he has repeatedly said he would not take.

With Johnson losing his majority after expelling rebel Tory MPs and with time running out until the UK is due to leave the EU on October 31, here’s a look at what to look out for over the next few days.

The Bill was passed in the House of Commons. Now lawmakers in the upper chamber of parliament, the House of Lords, will debate it. Time will be tight to get the Bill approved, as Johnson has moved to suspend Parliament as of next week.

The House of Lords took part in a rare late-night session on Wednesday, with pro-Brexit members threatening to try and stop the Bill by talking so much that time runs out. The House of Lords agreed that all stages of the legislation would be completed by Friday at 5 p.m. That would give the House of Commons enough time to debate any amendments made by the upper house and send the legislation – if it passes again – to Queen Elizabeth II, who could put the law into effect by as soon as Monday.

The Bill would force Johnson to delay Britain’s EU exit until January 31, unless parliament approves a new deal or votes to support a no-deal Brexit by October 19 – which are both unlikely scenarios.

Is a no-deal Brexit off the table?

The UK could still crash out of the EU without a transition agreement – the only question would be when that would take place. The current Bill only delays the issue, kicking the can down the road until January.

Any extension would also need the unanimous approval of the leaders of the remaining 27 EU member-states – and the British government would have to provide a valid reason for doing so.

Although EU leaders are growing frustrated with the stalled process and preparing for a no-deal scenario, they’re also looking to avoid the likely economic catastrophe that would come with the UK leaving without a deal.

Besides a no-deal Brexit, the UK could also still leave with a deal that would smooth the transition, or it could call Brexit off altogether.

Is a snap election still on the horizon?

Despite Johnson’s failed bid to call a snap election, Britain could soon be headed to the polls. Once again, it’s a question of timing.

Johnson wanted to hold the election on October 15 – just a few days before an EU leaders summit in Brussels from October 17 to 18.

Opposition Labour party leader Jeremy Corbyn said he supports early elections, but only once the no-deal Brexit blocking Bill has been passed. The Labour leader also reportedly said that he wouldn’t want to hold the election before the current Brexit deadline on October 31, according to the BBC.